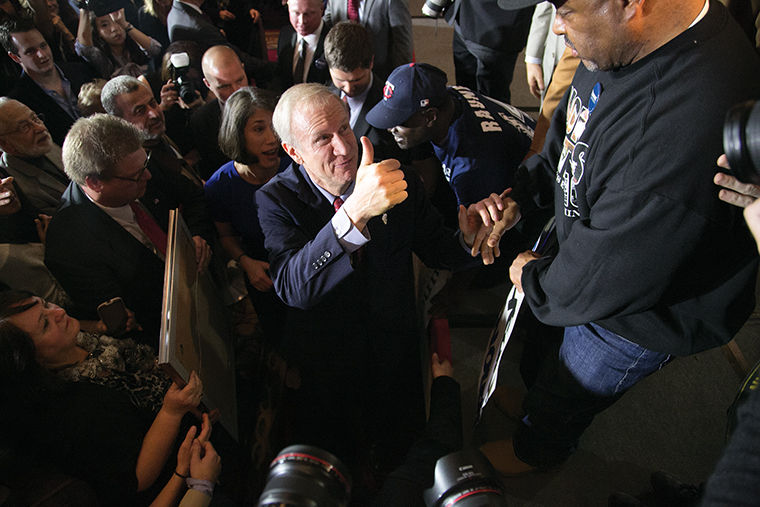 Illinois voters elected millionaire Bruce Rauner to become the state’s next governor on Nov. 4, beating out incumbent governor Pat Quinn. Rauner will become the first Republican governor the state has had in 12 years. Some are anxious to see what he will do to fulfill his campaign slogan, “Shake Up Springfield.”

Jaron Payne, a junior radio major from Lansing, Michigan, said he usually votes Democrat but if he had registered in Illinois on time, he would have voted for Rauner.

Payne said he had mixed feelings about Rauner getting elected but said he thinks change is necessary and Rauner is the right person to do it. Payne also said Rauner will do what is necessary to fix Illinois’ budget crisis and do what is best for Chicago and the state as a whole.

“Change is good, so hopefully the new governor will bring about some good changes,” Payne said. “That’s really important, and he had some good solutions to the problems that we’re currently facing.”

Andre Kimble, a 46-year-old U.S. Army veteran and Chicago Heights, Illinois, resident, said he voted for Quinn but hopes Rauner will do the job effectively and efficiently.

“I hope he does well for the state because that’s what it’s all about, whether it’s Democrats or Republicans running the state,” Kimble said. “I just want him to be an equal opportunity governor. I’m pulling for him just as much as I would have pulled for Quinn.”

Kimble said he thinks Rauner will focus on boosting the state’s economy.

“I think Rauner will probably focus on putting more people to work instead of having a lot of people on public assistance, which is very important because when you have an opportunity to make a good living by working hard, that’s the best route to go,” Kimble said.

However, he said one of his concerns about having Rauner as governor is the possibility of reduced public assistance for people who need it.

Kimble said his biggest concern about having Rauner as governor is that he will not help poor and minority residents enough and will only focus on the wealthy.

“My concern is him helping African-Americans, Hispanics [and] Asians,” Kimble said. “I believe that was one of the goals that Quinn had and I know most Republicans are about helping the wealthy people, so I just want him to make sure everybody gets what they deserve in this state.”

Payne said his main concerns are taxes and violence. For example, he said the 5-centwater bottle tax in Illinois is outrageous and should be eliminated. One of Rauner’s campaign promises was to reduce the income tax.

“If you’re going to tax those types of things, maybe give us some incentives,” Payne said.

Cheryl Pugh, a Near West resident, said having Rauner in office is a disservice to the state.

“It’s a travesty because he does not appear to be one who is for the working class,” Pugh said. “I think he supports more of the people who come from money and privilege. We’re probably going to see major changes in programs that have been funded and supported for people in the lower and working class.”

Pugh said she is concerned about the lower and working-class people who will no longer have the benefits of various programs due to low funding and resources getting cut. She said those people need assistance just to make ends meet, and further budget cuts would make things even more difficult for residents.

Melissa Tamez, a 24-year-old freelance photographer from Garfield Ridge, said she is also worried about Rauner cutting the minimum wage.

“Not [increasing the] minimum wage is making people have to work more and more each day just to [pay the] bills,” Tamez said.

Nick Costello, a radio major from Downers Grove, Illinois, said he does not identify as Republican or Democrat. He said he thinks politics always bring controversy.