Awkward: Talking to your aging relatives about the toxic masculinity of neglecting their health 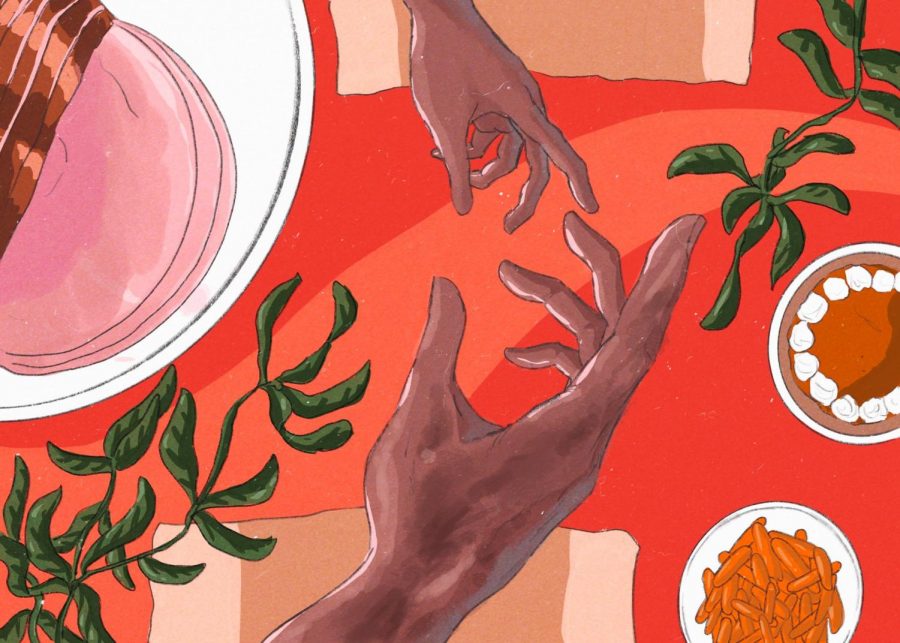 You are spending your first night home for the holidays relaxing under a mountainous comforter on your parents’ couch with your hands occupied by a bowl of ice cream and hot apple pie. And then, your dad walks in.

Any year before, this would be fine. You would discuss school for a moment before he asks if you want the TV remote, and the two of you would ultimately decide to turn on his favorite lawyer show. But for the past year, your conversations have been devolving.

Now, when he asks you how school is going, you answer, and he says, “What? I didn’t quite get that,” so you say it again, but you shout this time. Next, he asks if you want the remote, and you answer yes, but after a silent moment of trying to decipher what you said, he says, “I can’t—you’re going to have to speak up. You’ve been so quiet lately.”

Frustrated, you tell him to just turn something on, and when he clicks the power button, the noise level in the room goes from awkward silence to Marvel movie in an IMAX theatre.

You want to talk to him about getting his hearing checked for his own safety, but every time you do, he is curt and grumpy with you for weeks—you gather he thinks anything different than the way his body functioned at 20 is a weakness and should be ignored for his and his family’s peace of mind—and you have about 10 family gatherings to get through over the next month.

How do you bring up traits of toxic masculinity like this to a loved one without the conversation turning into a monthlong feud?

The Chronicle spoke with relationship, etiquette and communication experts to find ways to soften the blow, whether you’re discussing weakening limbs, early dementia, loss of hearing or anything in between.

Catalina Lawsin, Ph.D., a clinical health psychologist specializing in sex and relationships at her private practice, said make sure your intent is not to make a point or attack the person because this will only polarize the two of you. Instead, open up the conversation by helping them feel safe and normalizing their situation.

“It’s really hard to age,” Lawsin said. “It’s really hard when our masculinity or how we see ourselves as men begins to get challenged as we age or as we start to lose some of our abilities or aren’t as sharp.”

Let them know you’re coming from a place of love, said Bonnie Tsai, founder and director of Beyond Etiquette, a social and business etiquette consulting agency.

“You want them to be healthy. You want them to be around as long as they can because you enjoy having them around,” Tsai said. “[If they are concerned with their masculinity], let them know it’s not about being a man—it’s really about taking care of yourself.”

Sylvia Mikucki-Enyart, associate professor at the University of Iowa in the Department of Communication Studies, said focus on the medical condition and not the person.

“[It’s] not like, ‘You need to get help,’” Mikucki-Enyart said. “[But more like], ‘Oh, I think if we went to the doctor to get hearing aids, that would be a lot easier to hear,’ or ‘you wouldn’t have to have the volume so loud,’ or ‘we wouldn’t have to repeat things.’”

Rather than making this about how they will not ask for help, you can also make it an emotional plea for you—you want them to be there for you.

Mikucki-Enyart said do not frame this as an issue of toxic masculinity. Instead, you can let them know you know it can be scary going to the doctor, but you’ll go with them to be their advocate and take notes. Let them know you value them, and you want to be there to support them.

If you use phrases like toxic masculinity, Lawsin said, expect defensiveness because they’re probably not perceiving themself that way.

“Same thing if you label them a misogynist, you label them a racist—well then, expect a racist reply,” Lawsin said. “This is where we need to learn to meet people where they’re at. You want to have a conversation with somebody, then don’t start off attacking.”

Our society has created a culture around being a lone, independent hero, but having people who bring different viewpoints to the table can help us find ways to be better, Tsai said.

“We’re not perfect, and it’s okay to ask for help. It’s actually super brave and courageous to ask for help,” Tsai said. “To let them know they have a support system is important and that you’re coming from a place of love and care, and it’s not to judge them. I think that will help soften the edges and to create an environment that helps them be like, ‘Okay, I can be vulnerable. I can say that I’m scared. I can say I’m not okay because no one’s here to judge me.’”