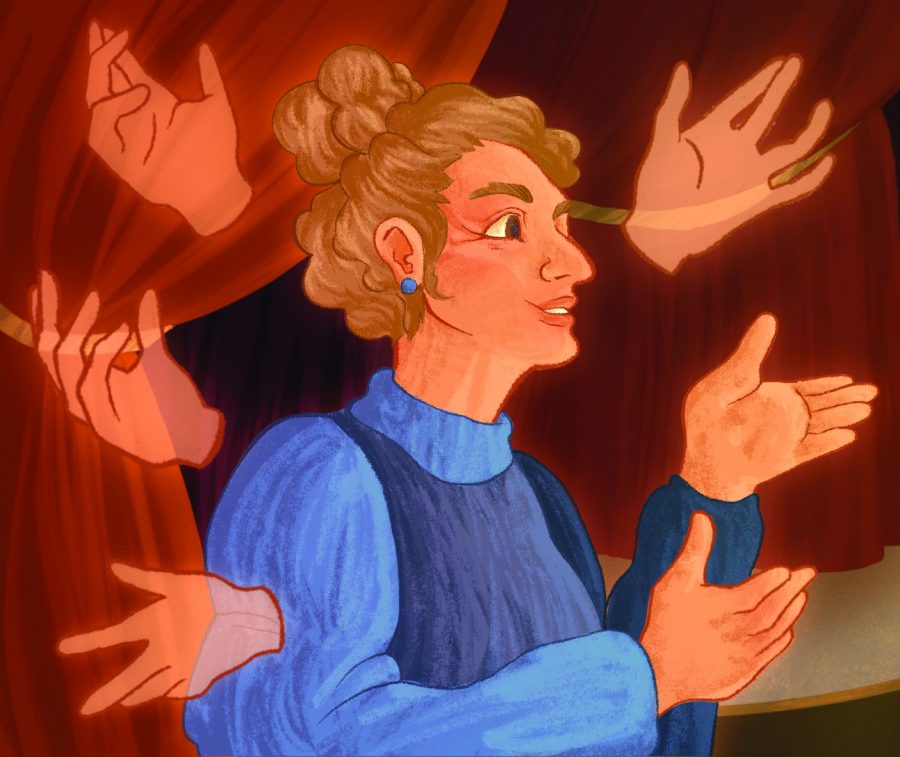 Lights dim, the audience silences, a curtain opens and actors take the stage, but they are not the only ones. American Sign Language interpreters also take their position on theatre stages as the show is about to begin.

Prior to any show, interpreters memorize the script, listen to audio recordings of the show and sometimes watch a video of the performance, Rangel, who is deaf, said through a sign language interpreter.

When the interpreter is deaf, they have to take extra time to discuss the character’s voice and the tonal inflections so everything matches up between ASL and the original script, Rangel said.

Beyond memorization, interpreters must also adapt to last-minute changes in the script.

“The interpreters have to be ready to change what they’re doing at a moment’s notice because we want to give [the deaf community] the same accessibility,” Rangel said. “We don’t want it to be a different experience for the hearing theatregoers and the deaf theatregoers.”

Many theatres offer closed-captioning for shows, but Rangel said this doesn’t always help the deaf
community because English and ASL have different structure and grammar.

Freelance ASL interpreter Sheila Kettering, who interprets at the Paramount Theatre, 23 E. Galena Blvd., Aurora, Illinois, said she prepares for a show for about 50 to 75 hours. She said it is important for the audio to be heard before the show so the voices and tone are correct.

“With musicals, you want your deaf audience to feel the rhythm and the melody of that music, as well,” Kettering said. “It takes an additional component of preparation.”

She said people often wonder how a deaf person can enjoy a musical.

“Even if they can’t hear the music, they can experience the dance and the feel from the speakers; they get the rhythm,” Kettering said.

Rangel is particular about the interpreters she selects for each performance, making sure they fit the role just as much as the actors.

“The characters, the culture that’s involved, the language that’s used, you have to find an interpreter that can match and have all of that inside them already,” Rangel said.

The number of interpreters at each show can vary depending on the size of the cast, said Andy Wilson, house manager and accessibility coordinator at the Goodman Theatre.

Most theatres have interpreters stand below the stage in the center. However, when the Paramount introduced interpreters in 2015, Kettering said the interpreters were either on the side with a music stand in front of them or in the seats alongside patrons.

This year, the Paramount is moving them to the front of the stage, making it easier for deaf patrons to view them, she said.

Columbia’s Getz Theater Center, 72 E. 11th St., takes requests for ASL-interpreted performances, according to Production Manager Pete Dully. When interpreters are requested, the Theatre Department contacts the ASL Department to pick out the perfect interpreter or interpreters for the show, Dully said.

Wilson said he wants to see accessibility options involved in the design and production of shows. Having interpreters directly shadow actors would be a step in the right direction with this, he said.

Wilson added he would like to see an increase in the number of shows with ASL interpreters. Both the Goodman and the Paramount have one show per production run that includes ASL interpreters.

However, Wilson said they need more people using these services. He is working to connect with the deaf community to bring more people to the theatre.

“We need to do a better job of going out into the community and reaching out to folks and making them feel like this is a worthwhile investment,” Wilson said. “If they come in and they sit down for a two-hour show, they’re not going to leave disappointed that we didn’t do it well.”

Halperin said having closed-captioned shows could also help the deaf community. However, she said having these show components is difficult because of the high cost of captioning.

Rangel said all the preparation and hard work pays off when she sees people in the deaf community reaching and enjoying the shows.

“If the deaf people are having the same emotions, the looks on their faces, if everything is the same, then we’ve done our job,” Rangel said.