The Columbia Chronicle • May 2, 2020 • https://columbiachronicle.com/animal-crossing-is-the-new-socialization

‘Animal Crossing’ is the new socialization 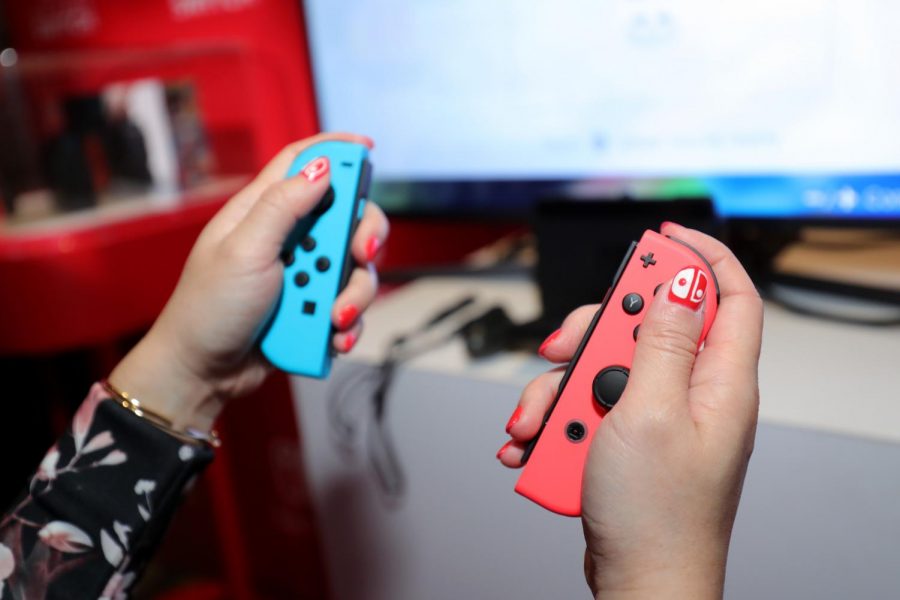 Photo by Neilson Barnard/Getty Images for Nintendo of America

"Animal Crossing" is a Nintendo Switch game where players can create and customize their own deserted island, completing tasks such as collecting fruit, fishing and chopping wood with the goal of collecting enough in-game currency to personalize their island.

After a stressful move from the Dwight Lofts on-campus residence hall to her parents’ house in Santa Cruz, California, freshman animation major Isabelle Woo has established a new routine through the video game “Animal Crossing.”

Woo said even though “Animal Crossing” is not exactly productive, it helped her adjust to a schedule before classes began online.

“It’s been really hard trying to stay organized but [‘Animal Crossing’] has helped because it’s something you check every day,” Woo said.

With 1.88 million copies sold just three days after its March 20 release, “Animal Crossing: New Horizons” has become something veteran gamers and gaming newbies alike are turning to for a semblance of normal socialization and routine amid statewide stay-at-home mandates.

“Animal Crossing” is a Nintendo Switch game where players can create and customize their own deserted island, completing tasks such as collecting fruit, fishing and chopping wood with the goal of collecting enough in-game currency to personalize their island. The game—which costs $59.99—also allows players to customize their character and visit other players through the game’s multiplayer feature.

More than just spending socially-distant time with friends, some “Animal Crossing” users are turning to the virtual space as an extended function of public space. For instance, pro-democracy protesters in Hong Kong are using it to stage demonstrations in lieu of taking to the streets, as reported April 10 by Vice News.

David Gerding, an associate professor in the Interactive Arts and Media Department, said there are cultural benefits to video games but he worries people will run the long-term risk of increased isolation.

“Our society has more ways than ever to affect social connection at a distance—something that is likely helping a lot of people during this COVID-19 shelter-in-place strangeness,” Gerding said. “The new virtual social reality, while surprisingly capable of connecting people at a distance, is also a wildly new and underdeveloped foundation on which to build social cohesion.”

Jake Wittich, a reporter for the Chicago Sun-Times and former managing editor of the Chronicle, said the game was designed with relaxation in mind as well as community building.

“When the stay-at-home order started, I was realizing, ‘Okay, thank God ‘Animal Crossing’ is coming out because I’m gonna need that to stay sane,'” Wittich said. “It’s the perfect game for this moment.”

Wittich said playing “Animal Crossing” has ensured he checks in on his friends every day—both in the game and in real life.

“While the real world is really stressful, this is a good way to escape for a little bit in a beautiful, deserted island where nothing bad ever happens,” Wittich said.

With Grimecraft’s music tour dates canceled due to the coronavirus, he is “doubling down” on his efforts on Twitch, a streaming platform, to stay on schedule for his album.

The music producer and content creator produces what he calls “video game bangers,” which are remixes of electronic music inspired by video games. When “Animal Crossing: New Horizons” was released, Grimecraft had the idea to build his island into a music festival.

Grimecraft said although he is making less money than before, he continues to make music because it is important to connect with people during this time.

“People are finding this game to be their lives now, and I almost feel that way too,” Grimecraft said. “I live more in the game right now than I do outside in real life.”