ANDIE and The Bandits steal show at Biggest Mouth 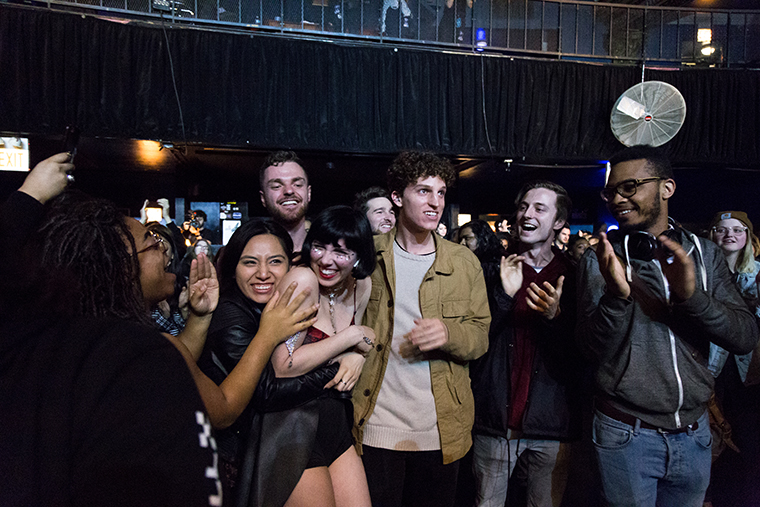 ANDIE & The Bandits won first place this year's Biggest Mouth at Metro, 3730 N Clark St, April 19. They will be opening for this year's headliner at Manifest May 10.

Deafening shouts of excitement and fervent applause erupted at Biggest Mouth as ANDIE and The Bandits were presented with the giant first prize check of $1,000.

“The most important part [is] expression, and turning painful things into something that’s beautiful or at least tolerable. Because life sucks sometimes,” Williams said about the band’s music. “Trying to turn it into something that’s a positive thing or a song someone else can jam to is a good way to go about it.”

In addition to the $1,000 prize, the band will also receive a five-hour recording session with Honey Jam Records, 1648 W. Kinzie St., and time in Music Garage’s showcase room with a sound engineer.

ANDIE and The Bandits will also open for the Manifest headliner May 10.

Capital Soiree claimed second place in their return performance at Biggest Mouth. The band was awarded a photo shoot with a student photographer and rehearsal time with Music Garage.

Senior audio design and production major and Capital Soiree band member James Kourafas said since the band last played at Biggest Mouth two years ago, their performance quality has greatly improved with more practice and the addition of a drummer.

In third place, Aurin and The Hex were also given rehearsal time at Music Garage. The group, composed entirely of women and nonbinary artists, stood out from the lineup with its message of love and empowerment.

“We’ve always had this very consistent respect and fun-loving energy in our practices and in our interactions with one another,” said junior contemporary urban and popular music major Aurin Woods. “What [audiences] receive from us is not fake or forced. It’s what is embedded, instilled, grounded and founded in the music, and in our connection to one another. The music that we do is all just a different variation of that energy. We’re really just putting pieces of ourselves into this performance.”

“[The performances] were spectacular; they were diverse, really amazing,” Chatman said. “The music here was very telling of Columbia’s prowess as an institution and how [it] empowers [its] students. I was very impressed.”

Madeline Brittingham, Student Programming Board president and junior music and music business management double major, said the most exciting part of Biggest Mouth is the variety of acts showcased and the unique atmosphere.

Out of the 30 acts that auditioned in March, only the most talented performers made the cut, according to Student Programming Board Director of Communications and senior graphic design major Maggi Eachus.

“We don’t want to put 12 bands up there that all sound the same,” Brittingham said. “We want to represent the interests of the student body and their different tastes in music.”

Correction 5/16/19: A previous version of this story said Ebonnie Rowe was an alumna who owned Honey Jam Records. Rowe actually owns Honey Jam in Canada. The Chronicle regrets this error.