Amid lingering deficit, President Kim, administration search for optimism: ‘We believe in this institution’ 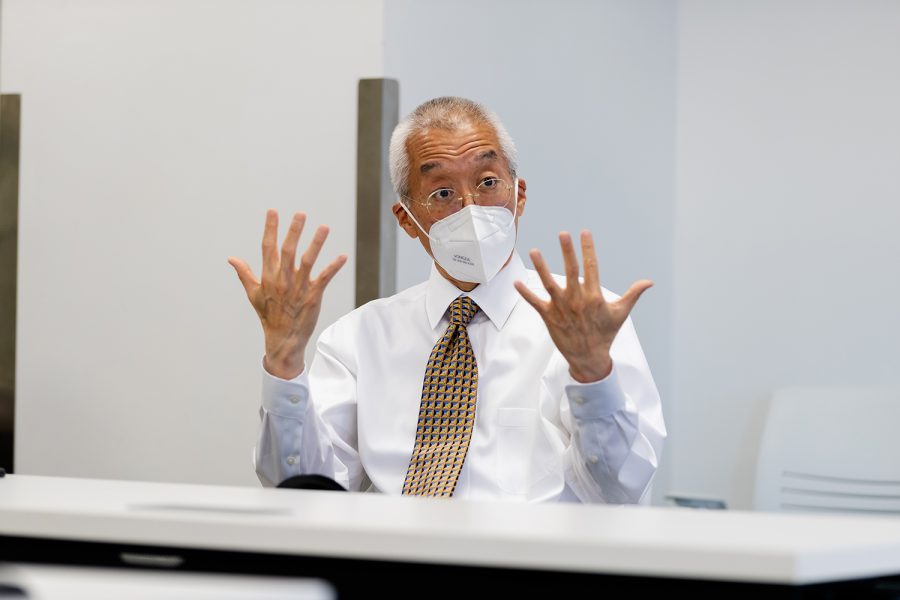 President and CEO Kwang-Wu Kim explains how the college has adapted to create safe learning environments for students this fall.

By Camryn Cutinello and Noah Jennings

Eighteen months ago, Columbia faced a new reality when the COVID-19 pandemic forced classes to go remote. Now, the college is facing another new reality: bringing the campus back together.

The Chronicle sat down with President and CEO Kwang-Wu Kim and other key members of the administration to discuss their thoughts on the college’s status with a unique year ahead.

COVID-19 and the return to campus

During the interview on Sept. 9, Kim said seeing students’ faces again has made his return to campus “emotional.”

“I felt like my whole energy base was missing [last year],” Kim said. “Even just seeing students at Convocation for me was just very thrilling.”

Kim said he is pleased by the COVID-19 vaccination rate on campus, and it gives him hope for the year ahead.

“We’re coming into this year with the advantage as a community of an extraordinarily high level of [vaccinations],” Kim said.

The Columbia community has a total vaccination rate of 97%, numbers that Chief of Staff Laurent Pernot said give him confidence in a smooth year ahead.

“We are one of the most vaccinated places, frankly, anywhere on the planet,” Pernot said.

Because of this and the masking rules, Pernot said the college does not have any threshold of positive cases set for campus regulations to change. Instead, the COVID-19 task force will continue to work with Rush Medical Center to determine the best path forward.

Senior Vice President and Provost Marcella David said the Columbia community as a whole cares about being socially responsible and staying healthy, adding that the COVID-19 regulations at Columbia do not carry the same “political ramifications” as they would at other schools.

“We’re an institution where the students, the faculty and the staff are all working together to make this a safe environment,” David said.

This fiscal year, Columbia is working with an expected deficit of $27.5 million. Jerry Tarrer, senior vice president of Business Affairs and chief financial officer, said due to federal funding the college predicts the deficit this year will ultimately end up lower, but it is still basing the budget off of the projected numbers.

Kim said a large part of the deficit comes from a change in recruitment strategies. Traditionally, Columbia did not discount tuition as much as other schools, but attempted to present the lowest tuition rate possible. The college found that prospective students reacted more positively toward higher discounts and started giving more discounts to students through financial aid, but this change added to the deficit.

Kim said despite the deficit, Columbia is still investing in “key priorities,” such as faculty hires and Diversity, Equity and Inclusion work, with the hope that these investments, along with the updated recruitment model, will have a positive impact on the budget in the future.

“There’s a difference between a deficit that surprises you, which is really the worst scenario, versus a deficit that you’ve planned out,” Kim said. “And so where we are right now is that we’ve made a conscious decision to allocate more money this way, believing that over the course of the next number of years, it’s going to even out and we’ll be back in balance.”

The return to campus also means a return to student housing. Columbia leases space in four residence halls, which the college had to pay for last year, even when most students were learning from home.

“The college has several dormitories for which we have long-term lease commitments,” Tarrer said. “So we’re, in essence, on the hook to pay for those dorms, whether we have students occupying them or not. So having that in-person experience meets the student needs and provides them an opportunity to live on campus and to engage. But it also helps the college’s bottom line.”

During a Faculty Senate meeting Sept. 10, Michael Joseph, vice president of Enrollment Management, shared the latest enrollment numbers, showing a slight decrease this year from the number of students registered on opening day last year, going from 6,854 in Fall 2020 to 6,746 in Fall 2021.

The numbers will not be finalized until census day on Sept. 28. During the meeting, Pernot shared that the numbers are expected to go up due to students who previously had their schedule canceled due to not getting vaccinated. In total, 71 students were able to re-enroll in time to be counted toward the total first-day enrollment.

Kim said he is content with where the numbers are given the circumstances but would like to see enrollment grow in the coming semesters.

“Obviously we’d like to have more students, but we feel pretty good about it,” Kim said. “One of the things that was challenging this last year was we didn’t get to use our most effective recruitment tools.”

Two years ago, the college began a five-year plan with increased spending to ultimately bring enrollment to 8,500 students. Pernot said they have now “reset the clock” on that same plan due to COVID-19.

Kim said the administration started planning last spring for new students’ arrival in the fall, which this year included both the freshman and sophomore classes.

“I had a very specific experience — we were doing taping on campus, and one of the students who was being filmed was a sophomore and was saying that they were very excited, because it was the first time they’ve been on campus. That just made this real to me, someone who had been a student for a whole year who had never been on campus,” Kim said.

Sharon Wilson-Taylor, vice president for Student Affairs, said the plan for sophomores is called Engage 2.0. The events planned included socials for sophomores to meet fellow classmates in person and services to teach students about campus resources.

“Engage 2.0 — all the things that we did with the freshman that the sophomore missed out on — we’re going to go back and do it with avenues, because they’re a little bit more mature,” Wilson-Taylor said.

Tarrer said he wants students to know the administration is dedicated to providing the best education possible.

“We believe in this institution … we believe in our students,” Tarrer said. “We’re really, really dedicated to ensuring that you all as students have everything you need to get the kind of education you want to receive.”

David said seeing every student work through a form of adversity in the past year gives her pride.

“I’m really proud of our students,” David said. “I’m really thankful for the trust the students have put in us to launch their careers.”

As another unprecedented year begins, Pernot said to remember community.

“We’re all in this together,” Pernot said.