The Columbia Chronicle • May 16, 2019 • https://columbiachronicle.com/alumni-visitation-policy-change-giant-middle-finger-to-graduating-students 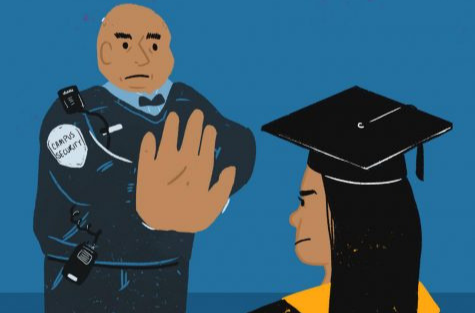 Current and former students are enraged by a policy change from the college requiring alumni to have a scheduled appointment before entering campus buildings, effectively cutting off access they once took for granted.

Effective July 1, in addition to needing to pre-arrange campus visits, alumni will no longer be able to use ID cards to access buildings; existing cards will expire June 30. They are still welcome to access the library, but will need to schedule an appointment. Alumni who need to access buildings long-term—for up to three months—will now be required to coordinate with Campus Safety and Security.

“The overarching goal of the policy is to further increase security for current students and employees by helping ensure individuals who enter our buildings have a reason to be there, and the college is in possession of information about their identity,” said the News Office in a May 8 statement to The Chronicle. “Alumni will continue to be able to return to campus to conduct guest lectures or participate in scheduled networking events with students or use the library. Alumni will also continue to be welcome to special events on campus that are open to them, such as performances, Manifest, select department events and projects and celebrations including events surrounding the grand opening of the new Student Center.”

Senior cinema art and science major Catherine Cutaia, who graduated May 11, said she immediately began writing an email to the college after she found out about the policy change.

“Why are alumni treated like strangers when Columbia still wants them to donate after they graduate?” Cutaia said. “We don’t need to be kicking out alumni.”

Cutaia is in the midst of a practicum project creating a promotional video for Columbia, and she will need to continue working on it over the summer. However, due to the new policy, she will need to coordinate visitation with Campus Safety and Security to access facilities available at 1104 S. Wabash Ave.

“I understand there are security concerns, generally, given that campus is in the middle of a city, but this feels kind of like a giant middle finger, especially to those of us who both attended and taught at Columbia,” Andrew M. Edwards commented on Facebook. Edwards identified himself on Facebook as a former Columbia music major and adjunct in the department.

Some alumni commenting on the post found it “ridiculous” of the college to implement such a policy and then continue to ask alumni for donations.

“This is tone deaf and inhospitable gatekeeping that targets the people who have relied on Columbia as a lifelong resource and support system—many of whom are burdened with decades of debt from the opportunity they pursued at your institution,” wrote 2016 cinema art and science alumna Eve Studnicka. “Barring alumni visits outside of regimented appointments undermines your messaging that Columbia is an inclusive and welcoming environment invested in generational engagement.”

Set to graduate in December, senior acting major and campus team manager for The Black Sheep, a satirical website for college students, Robert Morvay finds the policy “harsh, rude and disappointing,” particularly because he was planning on using the library and Student Center after he graduates. He added he finds it strange that alumni will need the assistance of faculty to gain access to buildings.

Cutaia said it was upsetting that student input was not factored into the decision and that it did not make sense to bar alumni from accessing buildings, when alumni should just be required to scan their IDs.

“It creates the environment of students versus administration,” Morvay said. “The way things are right now are nice. No one’s getting hurt, no one’s in trouble, no one’s in harm.”