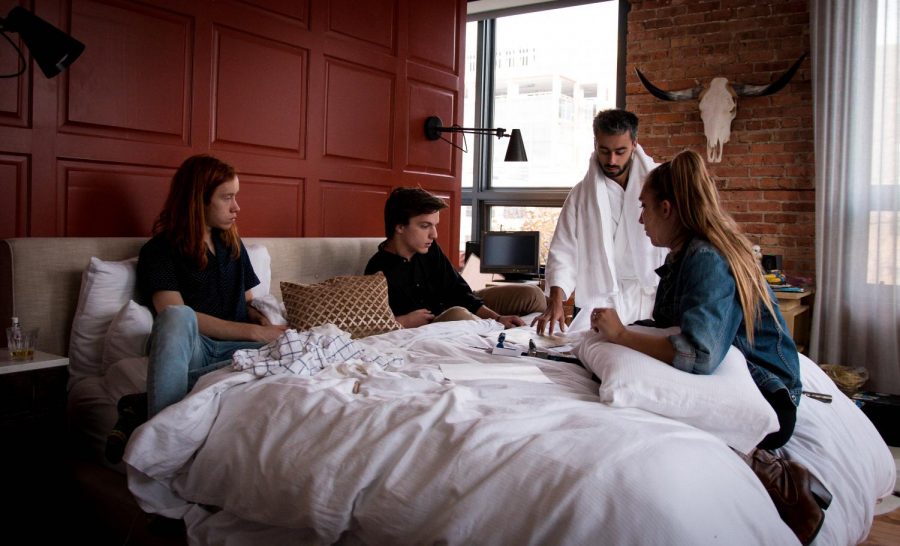 On a cold and rainy Chicago night, Cyril Bassil was riding a northbound Red Line train that got into an accident, forcing everyone to evacuate.

While standing on the platform and contemplating how to get home, Bassil struck up a conversation with a woman he was “quite attracted to.” The two hit it off immediately, but their moment of infatuation was short-lived.

Bassil, a 2017 MFA cinema directing alum, said although their lives were headed in different directions and nothing long-term ever came out of it, he viewed their experience together as “cinematic” and the perfect inspiration for a film.

“I was like, ‘How interesting is it that an accident happens, which is quite tragic, and from that accident, you can actually meet someone and be attracted to them,'” Bassil said. “Even if that relationship doesn’t evolve into anything serious, it can lead to more interesting reflection and decision-making in your own personal life.”

Soon after Bassil’s Red Line adventure, he approached his friend and fellow alum, Em Johnson, with a pitch for a feature film called “Blush,” loosely based on the encounter Bassil had with the woman on the train platform.

Because she enjoyed the idea, Johnson, a 2018 MFA cinema directing alum, hopped on board to help bring the film to life as a co-writer, director and producer.

“[Bassil] had the personal experience that he was able to give to me,” Johnson said. “I [was] able to take that and be like, ‘Oh, how do I make a film out of this and really dissect it and create something that was magical?’”

“Blush” tells the story of two characters—Henri Najm and Julia McKnight—who have an unplanned encounter in the back of an Uber ride-share in Chicago.

Najm, played by Bassil, is an accountant who is set to move to Atlanta after receiving a promotion. McKnight, played by Chicago-based actress Kearstyn Keller, is an aspiring Chicago actress, auditioning for a production at a local theatre.

The film follows the evolving relationship between Najm and McKnight over the span of a few days as they venture around the city together, including grabbing dinner in Chinatown, singing at a karaoke bar and playing arcade games.

Though the two started off as friends, their relationship grows more intimate as the film goes on, Keller said.

After Bassil approached Johnson with a rough sketch of the plot, Johnson said the two of them spent three months co-writing and fleshing out ideas.

The pair decided to write a “structured outline” of the film and focused on bringing in the “perfect cast” who could improvise each scene, Johnson said.

Johnson said she and Bassil intentionally wanted the actors to think of their lines on the spot and go “beyond the script.”

“It’s a good thing to give your actors the opportunity to improvise and really show what they think their character is,” Johnson said. “It also allows them to bring in their own personal experiences to the character.”

While the film was written and shot in 2017, the editing and post-production process did not wrap up until April of this year, Johnson said.

Bassil said the film has been submitted to contests throughout 2020, including the Sundance and Chicago International film festivals, but the crew has not been successful because of canceled events due to the coronavirus pandemic.

There is not a set date for the release of the film, Bassil said, and he does not yet know how the film will be distributed.

The crew wants to experience the film in a theatre setting because of their love for film but is also open to distributing it online, Bassil said.

Keller said finishing the film in the middle of a pandemic was reassuring for the cast and crew amid the “uncertainty in the world.”

“I think it’s needed, for all of us that were involved,” Keller said. “With everything being on hold, and a lot of unknowns, to have something you worked on and cherished so deeply be finalized; that’s really exciting.”