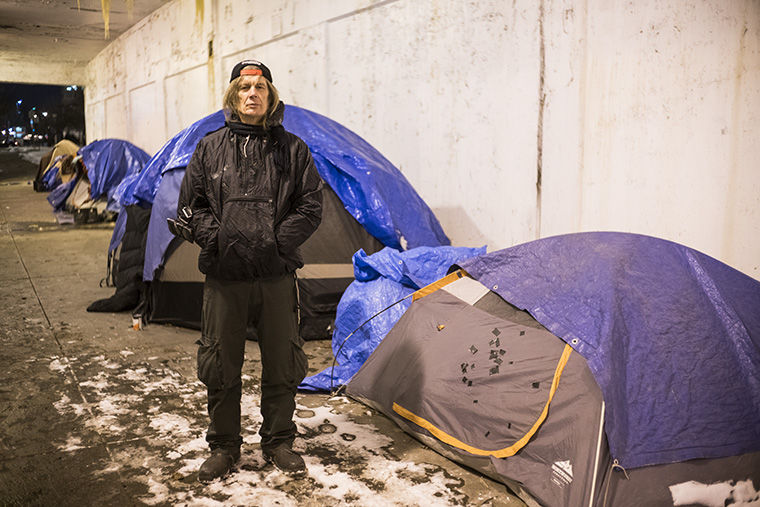 Mark Saulys, a resident of Tent City and organizer at One Northside, will benefit from the city's housing pilot program and move into a home soon, he said.

Below the busy Lake Shore Drive bridge over Wilson Avenue, snow and ice secures Mark Saulys’ tent to the cement. He has been homeless for more than a year but will trade his nylon walls for a sturdier home in a couple of weeks because of a city housing initiative, he said.

“I’m worried for the people here, and I can see that they are worried about being tossed out,” Saulys said about his neighbors remaining in Uptown’s Tent City.

Dozens of homeless people find refuge under the viaduct, which has often put them at odds with Chicago politicians. But construction slated to begin on the Lake Shore Drive bridges intersecting with Wilson Avenue and Lawrence Avenue this spring means time is dwindling for a place many call home, said Diane O’Connell, a staff attorney with the Chicago Coalition for the Homeless.

Saulys is one of 75 homeless individuals taking part in a pilot program, headed by the Task Force to Reduce Homelessness. Designed to address chronic homelessness in the city by providing housing to people in encampments like Tent City, the program was announced April 25, 2016, in a press release from Mayor Rahm Emanuel.

O’Connell said the pilot program has placed 43 residents in permanent housing and 13 in temporary housing. The facilitators have lost contact with 17 of the initially chosen Tent City residents, she added.

“There was this naive expectation that [the pilot program] would clear out the viaducts, and that didn’t happen,” O’Connell said. “As long as there is a finite amount of housing, there are always going to be more people coming under the viaducts, and there is good reason for that.”

The viaducts are in a relatively safe neighborhood, provide coverage from winter storms when shelters are full and are near services like One Northside, which organized a tenant association for homeless residents living in those areas, O’Connell said.

City officials have begun to push homeless people out of Tent City before construction begins, said Vivien Tsou, community organizer at One Northside, 4648 N. Racine Ave. The city has begun biweekly viaduct cleanings, which have force residents to have to leave their tents numerous times this winter, she added.

“Many are elderly or other than able,” Tsou said. “Imagine, to do it in 30 degree weather or below, and after you move, stand outside and wait for the cleaning to happen.”

Saulys said the “unnecessary” cleanings over this winter are a “harassment campaign.”

“It’s to make people’s lives as hard and as miserable as possible, hoping that [the homeless] go drop dead somewhere else,” he said.

The mayor’s press office, the  Department of Streets and Sanitation, which is responsible for the cleanings, and Ald. James Cappleman (46th Ward), the ward where Tent City is located, did not reply to requests for comment as of press time.

Tsou said the money allocated to the cleanings would be better used for housing for the homeless. Some Tent City residents have jobs but still cannot afford housing in the North Side, while others are married couples who would be separated in shelters, Tsou added.

Saulys is apprehensive about the changes that will come with moving but also hopeful for his future, he said.

To combat fears, Tsou said One Northside is collaborating with CCH to create a plan to ensure everyone in Tent City will have a home before construction begins, but the city plays a vital role in this fight by providing subsidies and linking residents’ caseworkers to possible landlords.

“It’s important to ensure that people are housed on the North Side and not just put into shelters to live under another bridge in another part of town,” she said.