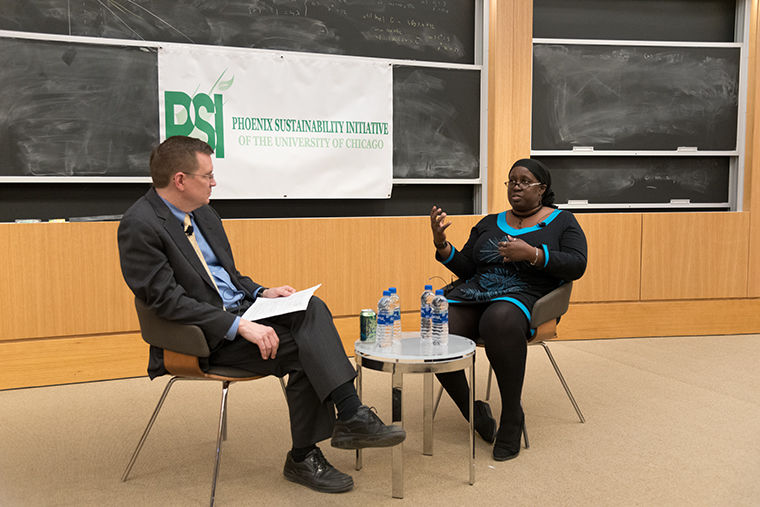 Mark Templeton, clinical professor at the University of Chicago Law School and director of the Abrams Environmental Law Clinic, moderated a discussion with Jacqueline Patterson on the disproportionate impact low-income communities face as a result of climate change at 1160 E. 58th St.

The link between climate change and its disproportionate impact on low-income communities may not often be seen, but it does exist, said Jacqueline Patterson, director of the National Association for the Advancement of Colored People Environmental and Climate Justice Program.

“Environment is about everything,” Patterson said. “These are inalienable rights. We can’t deal with environment in isolation.”

“Folks don’t know it’s not [normal for] half the kids in a classroom to have asthma, and half the people in their church [to] have chronic obstructive pulmonary disease,” Patterson said. “They don’t even realize that is not what happens in the world.”

East Chicago, Indiana, as well as other parts of the state have contaminated soil at 1,000 times the EPA-allowed amount of arsenic and lead in the soil and 30 times the allowable amount of lead in kids’ bloodstreams, according to Patterson.

There are multiple obstacles to address before solving these problems, Patterson said, such as relocating communities, which can separate families, or potentially harmful facilities and may not be a viable option.

Another option is investing in solar panels, which is more affordable for low-income households than most people may believe, Patterson said.

The average cost to install solar panels in Illinois ranges between $11,424 and $13,944, according to EnergySage—a solar energy cost comparing website. However, the larger the system, the more money it save the home owner in energy bills.

Without groups such as the NAACP the support of these issues would continue to worsen, said Shree Mehrotra, junior environmental science major at the University of Chicago and project leader for the PSI speaker series.

“You can’t achieve equity with any sphere without working together because the environment is impacted by race, gender or economics,” Mehrotra said. “It all ties together.”

Rebecca Barker, a second-year law student in the Abrams Environmental Law Clinic at the University of Chicago Law School who has had coursework in environmental justice issues, said these issues would be better addressed if more people were aware of the problems at hand.

“If you have groups that are visible and audible showing up at the table representing people who don’t have their voices heard, you get more people [represented fairly],” Barker said.