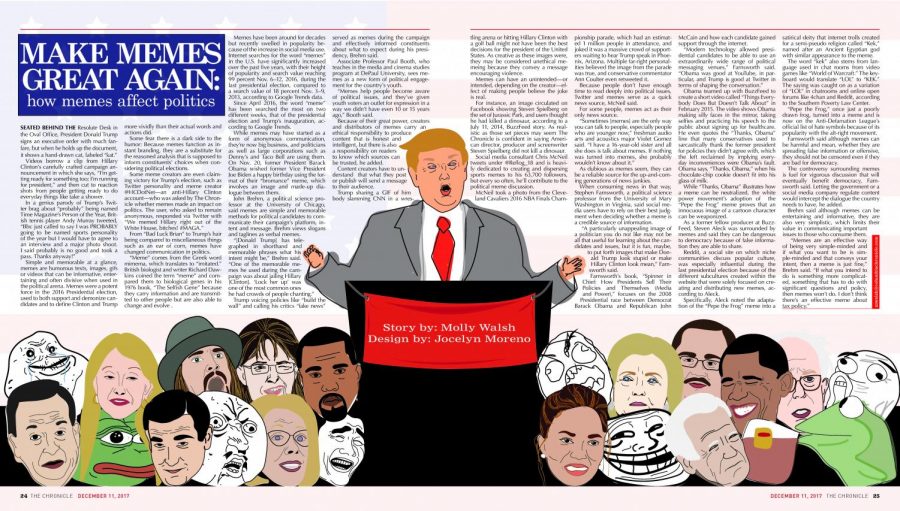 Seated behind the Resolute Desk in the Oval Office, President Donald Trump signs an executive order with much fanfare, but when he holds up the document, it shows a hand-drawn cat, labeled “kat.”

Videos borrow a clip from Hillary Clinton’s carefully crafted campaign announcement in which she says, “I’m getting ready for something too; I’m running for president,” and then cut to shots of people getting ready to do everyday things like take a shower.

In a genius parody of Trump’s Twitter brag about “probably” being named Time Magazine’s Person of the Year, British tennis player Andy Murray tweeted, “Bbc just called to say I was PROBABLY going to be named sports personality of the year but I would have to agree to an interview and a major photo shoot. I said probably is no good and took a pass. Thanks anyway!”

Simple and memorable at a glance, memes are humorous texts, images, gifs or videos that can be informative, entertaining and often divisive when used in the political arena. Memes were a potent force in the 2016 Presidential election, used to both support and demonize candidates and to define Clinton and Trump more vividly than their actual words and actions did.

Some fear there is a dark side to the humor: Because memes function as instant branding, they are a substitute for the reasoned analysis that is supposed to inform constituents’ choices when considering political elections.

Some meme creators are even claiming victory for Trump’s election, such as Twitter personality and meme creator   @HCDotNet—an anti-Hillary Clinton account—who was asked by The Chronicle whether memes made an impact on politics. The user, who asked to remain anonymous, responded via Twitter with “We memed Hillary right out of the White House, bitches! #MAGA.”

From “Bad Luck Brian” to Trump’s hair being compared to miscellaneous objects such as an ear of corn, memes have changed communication in politics.

“Meme” comes from the Greek word mimema, which translates to “imitated.” British biologist and writer Richard Dawkins coined the term “meme” and compared them to biological genes in his 1976 book, “The Selfish Gene” because they carry information and are transmitted to other people but are also able to change and evolve.

Memes have been around for decades but recently swelled in popularity because of the increase in social media use. Internet searches for the word “memes” in the U.S. have significantly increased over the past five years, with their height of popularity and search value reaching 99 percent Nov. 6–12, 2016, during the last presidential election, compared to a search value of 18 percent Nov. 3–9, 2013, according to Google Trends data.

Since April 2016, the word “meme” has been searched the most on two different weeks, that of the presidential election and Trump’s inauguration, according to Google Trends.

While memes may have started as a form of anonymous communication, they’re now big business, and politicians as well as large corporations such as Denny’s and Taco Bell are using them. On Nov. 20, former President Barack Obama wished former Vice President Joe Biden a happy birthday using the format of their “bromance” meme, which involves an image and made-up dialogue between them.

John Brehm, a political science professor at the University of Chicago, said memes are simple and memorable methods for a political candidate to communicate their campaign’s platform, intent and message. Brehm views slogans and taglines as verbal memes.

“[Donald Trump] has telegraphed in shorthand and memorable phrases what his intent might be,” Brehm said. “One of the memorable memes he used during the campaign was about jailing Hillary [Clinton]. ‘Lock her up’ was one of the most common ones he had crowds of people chanting.”

Trump voicing policies like “build the wall” and calling his critics “fake news” served as memes during the campaign and effectively informed constituents about what to expect during his presidency, Brehm said.

Associate Professor Paul Booth, who teaches in the media and cinema studies program at DePaul University, sees memes as a new form of political engagement for the country’s youth.

“Memes help people become aware of political issues, and they’ve given youth voters an outlet for expression in a way we didn’t have even 10 or 15 years ago,” Booth said.

Because of their great power, meme creators and distributors carry an ethical responsibility to produce content that is honest and intelligent, but there is also a responsibility on readers to know which sources can be trusted, he added.

Content creators have to understand  that what they post or publish will send a message to their audience.

Trump sharing a GIF of him body slamming CNN in a wrestling arena or hitting Clinton with a golf ball might not have been the best decisions for the president of the United States. As creative as these images were, they may be considered unethical memeing because they convey a message encouraging violence.

Memes can have an unintended—or intended, depending on the creator—effect of making people believe the joke is real.

For instance, an image circulated on Facebook showing Steven Spielberg on the set of “Jurassic Park,” and users thought he had killed a dinosaur, according to a July 11, 2014, BuzzFeed story. As realistic as those set pieces seem, The Chronicle is confident in saying American director, producer and screenwriter Steven Spielberg did not kill a dinosaur.

Social media consultant Chris McNeil tweets under @Reflog_18 and is heavily dedicated to creating and dispersing sports memes to his 63,700 followers, but every so often, he’ll contribute to the political meme discussion.

McNeil took a photo from the Cleveland Cavaliers 2016 NBA Finals Championship parade, which had an estimated 1 million people in attendance, and joked it was a massive crowd of supporters waiting to hear Trump speak in Phoenix. Multiple far-right personalities believed the image from the parade was true, and conservative commentator Ann Coulter even retweeted it.

Because people don’t have enough time to read deeply into political issues, Twitter and memes serve as a quick news source, McNeil said.

For some people, memes act as their only news source.

“Sometimes, [memes] are the only way you can talk to people, especially people who are younger now,” freshman audio arts and acoustics major Violet Gomez said. “I have a 16-year-old sister and all she does is talk about memes. If nothing was turned into memes, she probably wouldn’t know about it.”

As dubious as memes seem, they can be a reliable source for the up-and-coming generations of news junkies.

When consuming news in that way, Stephen Farnsworth, a political science professor at the University of Mary Washington in Virginia, said social media users have to rely on their best judgment when deciding whether a meme is a credible information source.

“A particularly unappealing image of a politician you do not like may not be all that useful for learning about the candidates and issues, but it is fun, maybe, to put forth images that make Donald Trump look stupid or make Hillary Clinton look mean,” Farnsworth said.

Farnsworth’s book, “Spinner in Chief: How Presidents Sell Their Policies and Themselves (Media and Power),” focuses on the 2008 Presidential race between Democrat Barack Obama and Republican John McCain and how each candidate gained support through the internet.

“Modern technology allowed presidential candidates to be able to use an extraordinarily wide range of political messaging venues,” Farnsworth said. “Obama was good at YouTube, in particular, and Trump is good at Twitter in terms of shaping the conversation.”

Obama teamed up with BuzzFeed to create a short video called “Things Everybody Does But Doesn’t Talk About” in February 2015. The video shows Obama making silly faces in the mirror, taking selfies and practicing his speech to the public about signing up for health care.  He even quotes the “Thanks, Obama” line that many conservatives used to sarcastically thank the former president for policies they didn’t agree with, which the left reclaimed by implying everyday inconveniences were Obama’s fault. Obama says, “Thanks, Obama,” when his chocolate-chip cookie doesn’t fit into his glass of milk.

While “Thanks, Obama” illustrates how a meme can be neutralized, the white power movement’s adoption of  the “Pepe the Frog” meme proves that even an innocuous image of a cartoon character can be weaponized.

As a former fellow producer at BuzzFeed, Steven Aleck was surrounded by memes and said they can be dangerous to democracy because of false information they are able to share.

Reddit, a social site on which niche communities discuss popular culture, was especially influential during the last presidential election because of the different subcultures created within the website that were solely focused on creating and distributing new memes, according to Aleck.

Specifically, Aleck noted the adaptation of the “Pepe the Frog” meme into a satirical deity that internet trolls created for a semi-pseudo religion called “Kek,” named after an Ancient Egyptian god with similar appearance to the meme.

The word “kek” also stems from language used in chat rooms from video games like “World of Warcraft.” The keyboard would translate “LOL” to “KEK,” and the saying caught on as a variation of “LOL” in chatrooms and online open forums like 4chan and Reddit, according to the Southern Poverty Law Center.

“Pepe the Frog,” once just a poorly drawn frog, turned into a meme and is now on the Anti-Defamation League’s official hate symbols list because of its popularity with the alt-right movement.

Farnsworth said although memes can be harmful and mean, whether they are offensive or spreading false information, they should not be censored even if they are bad for democracy.

The controversy surrounding memes is fuel for vigorous discussion that will eventually benefit democracy, Farnsworth said. Letting the government or a social media company regulate content would intercept the dialogue the country needs to have, he added.

Brehm said although memes can be entertaining and informative, they are also very simplistic, which limits their value in communicating important issues to those who consume them.

“Memes are an effective way of being very simple-minded and if what you want to be is simple-minded and that conveys your intent, then a meme is just fine,” Brehm said. “If what you intend to do is something more complicated, something that has to do with significant questions and policy, then memes won’t do. I don’t think there’s an effective meme about tax policy.”