Theater Wit’s ‘Full Monty’ leaves it all hanging out 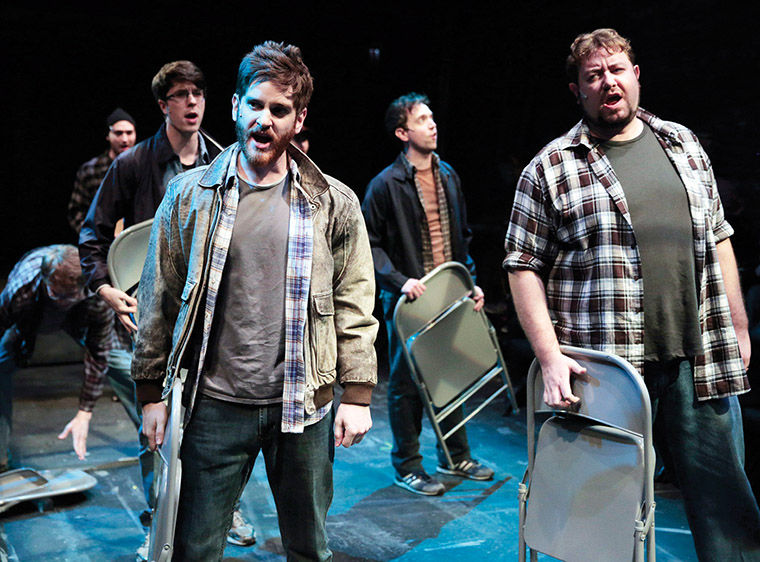 Theater Wit’s take on “The Full Monty” blends sexuality and humor in a touching manner in this Americanized live-action musical version of the 1997 British cult classic.

With so many established theaters in Chicago, it is always exciting to find a theater on the cutting edge. In Kokandy Productions’ Americanized live version of the 1997 British film of the same name, “The Full Monty” captures that essence at Chicago’s Theater Wit, 1229 W. Belmont Ave., thanks to a fantastic book by playwright Terrence McNally and catchy earworm music from David Yazbek.

The story revolves around six average guys who are out of jobs after their steel mill is shut down. After their wives attend a local Chippendales show and ogle over a dancer known as Keno, the men decide to start their own dance troupe called “Hot Metal” to make some cash. In order to draw a crowd, “Hot Metal” promises to go all out, show the “full Monty” and let everything hang out.

The jazzy musical does not leave much to the imagination. Although not suitable for children, Theater Wit’s small, open floor contributes well to the clever musical. The revealing two-and-a-half-hour play is cast perfectly, with star Garrett Lutz—whose outstanding singing and raunchy dance moves could give Magic Mike a run for his crumpled dollar bills—steals every scene he appears in. This is no small feat considering how uniformly hilarious the cast is. It would be easy for the actors to fall into stereotypes, such as the nerdy mama’s boy, the whipped husband or the funny chubby guy, but the cast imbues its characters with a depth that is rarely seen on such a small stage.

There is definitely no shortage of bare flesh in Theater Wit’s compact space, in which half the stage is mere inches from audience seats. However, the blend of self-deprecating humor and outlandish scenes gives the musical a nice mixture of big laughs and shock. Where the play could have easily relied on sexuality and raunchiness as crutches, director John D. Glover manages to give the play a deeper meaning that helps connect with the audience.

Although the big draw of “The Full Monty” is its raunch, the musical’s focus on relationships and fatherhood, and the struggle to keep the spark alive comes from the heart. It is easy to get a cheap laugh or two out of a bunch of average-looking guys dancing around in banana hammocks, but “The Full Monty” really scores when it deals with deeper issues. The relationship between Lutz’s character, Jerry, and his son is at the center of the play. It may seem comical to watch a young boy hanging around a group of male strippers, but the chemistry between the two gives the musical a sense of reality and seriousness.

The vocals in “The Full Monty” shine thanks to the cast’s powerful voices and beautiful harmonies. Each member of the superb ensemble brings something to the table, making each scene better than the last, leading to a powerhouse show-stopping finale.

“The Full Monty” is definitely a must-see. The musical fits perfectly into Theater Wit’s roster, making it the hottest tickets in town.