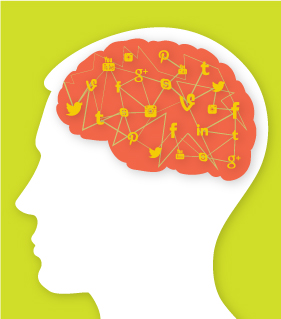 Anxiety disorders are on the rise in young adults, and recent studies suggest the spike may be related to social media.

Forty million adults in the U.S. suffer from an anxiety disorder, one of the most common mental health problems on college campuses, according to the Anxiety and Depression Association of America.

Lori A. Andrews, a Downers Grove psychologist who has worked with college-age adults for 30 years, said she has seen an increase in anxiety in people in their teens and early 20s. Young adults today face more competition and stress in school and the workplace than previous generations did, she said, adding that social media may intensify anxiety.

“It keeps them thinking that they’re left out, their life isn’t the same,” Andrews said. “Facebook is an image like watching a romantic fantasy: People only put the very best thing that happens at the moment. It just sets up the pressure of anxiety more than it does benefit.”

A 2012 study conducted by the Psychology Department at Michigan State University found a correlation between social media use and symptoms of social anxiety and depression in college students.

The study monitored more than 300 undergraduate students’ social media use, including platforms such as instant messaging, email and the Internet. The students who multitasked showed higher rates of depression and feelings of anxiety.

The college students’ anxiety levels were evaluated using questionnaires about their mental health and personality traits. Those who showed higher rates of anxiety answered positively to questions such as, “Are you nervous around other people?” and, “Do you avoid social situations?”

Christopher Hopwood, an associate professor at Michigan State University who worked on the study, said it proves a correlation between using multiple sources of media and anxiety, but media may not be the cause of the increased anxiety levels.

Hopwood said there is no substantial evidence to prove the current generation of students is more anxious than previous generations.

Gabby Pichardo, a freshman graphic design major at Oakland Community College in Southfield, Mich., said she used Facebook for almost two years before deleting her account. She said she does not believe Facebook ever caused her stress, but not using social media makes her less involved in the drama her peers deal with.

“Even on the news people talk about Facebook and how it can mess up relationships and even friendships, and I don’t want to deal with that,” Pichardo said.

In addition to the possibility that social media may cause anxiety symptoms, people who overuse social media sites may already be suffering from anxiety, according to Andra Hersey, a clinical social worker at Heritage Professional Associates, LTD.

Hersey said she thinks people who have trouble with social anxiety may try to compensate by interacting with their peers exclusively on social media sites. She said the behavior is risky because it could make people even less comfortable with real-life interactions.

“People with a lot of anxiety prefer social media relationships and it’s one of the only ways they think they can be social,” Hersey said.

She said social media use could cause increased anxiety and prevent students from peaking both socially and academically.

“I think they’re held back and hesitant to do the things they really want to do socially because they’re too busy being self-conscious, and academically I don’t think they perform at the level they’re actually [capable of],” Hersey said. “The anxiety gets in the way because your brain can’t do two things at once. It can’t keep you calm and your anxiety at bay and let you function at your 100 percent capacity at the same time.”