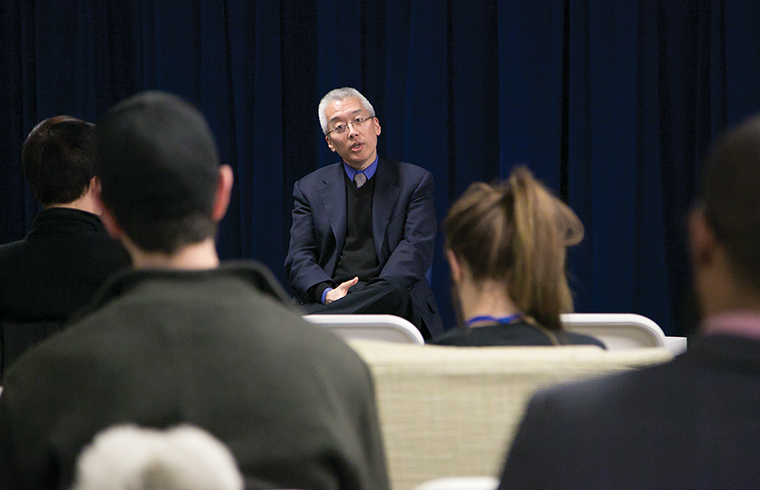 Coffee with the president

The Johnson Publishing Building, 820 S. Michigan Ave., took center stage during “Coffee with the President,” a series of events where students can participate in an open conversation with President Kwang Wu-Kim, due to a lack of student spaces and the need for a campus student center.

The Feb. 26 discussion was the second in a series of forums President Kim will host with students. The initiative began to provide students with the opportunity to have an open conversation with the college’s president, Kim said.

Kim opened the presentation with a conversation about the Johnson Publishing Building, the site of Columbia’s scrapped library. The college purchased the property when an inspection revealed the current library could not hold the weight of its collection, according to Kim.

Alicia Berg, vice president of Campus Environment, and her team, solved the problem by redistributing the books with her team, removing the need for the Johnson Publishing building. The administration is still exploring options for the empty building, Kim said

“When I arrived, the first thing I said was, ‘Why aren’t we moving forward with the plans [for the Johnson Publishing building]?’” Kim said. “Some of the plan [they had in mind] was devoted to new types of learning environments, new types of technology for students to explore and spaces for collaborating.”

Kim also discussed the lack of central space for students on campus. Several students said a student center would be beneficial and would help them feel more connected to the college, while also functioning as a location for student organizations to collaborate.

“This is a new experience for me, being on an urban campus that doesn’t have any kind of a traditional center,” Kim said.

Kim said the lack of performance spaces is another problem the school should address. He said he first heard about the performances and events Columbia offers during his bid for presidency.

“As a performer, the first thing I thought [of the spaces] was, ‘Are you kidding me?’” Kim said. “Given the quality of students and faculty that are focused on performance in our school, why aren’t there [more] theaters here?”

Max Horowitz, a senior Theatre major, said he attended the forum because he thinks the most important thing a college can do is be transparent.

“I think that [Kim’s] commitment to hearing the students’ voice in an open forum … is extremely important,” Horowitz said. “I think that Dr. Kim has a really clear idea of how students want to be heard and how to encourage that in the right way.”

Nicole Carroll, president of the Student Government Association and fiction writing major, was also in attendance.

“Something that SGA has been really focused on this year … is really having the student voice and administration meet more and at the same level so they can have a broader discussion and so [the students] can be a bigger part in these conversations that affect them, ” Carroll said.