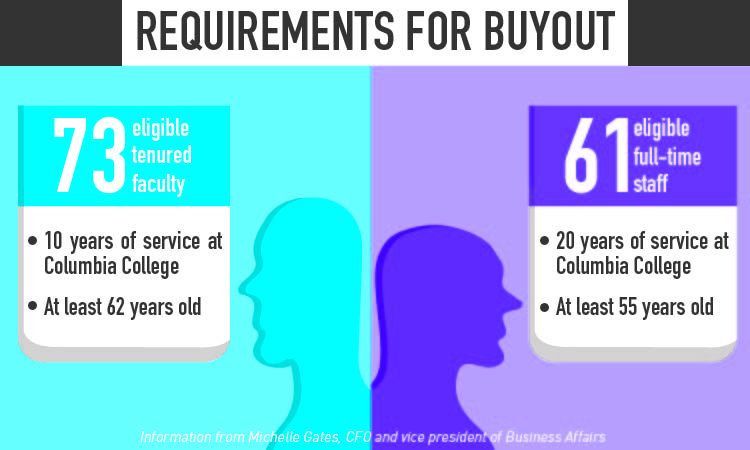 As part of the college’s ongoing efforts to reduce expenses, the administration is offering its first mass faculty and staff buyout program.

According to Michelle Gates, CFO and vice president of Business Affairs, 73 faculty and 61 staff members are eligible to participate in the Voluntary Separation Incentive Program, a buyout program that offers one year of annual full-time salary at base pay to those agreeing to terminate their employment by the college, effective June 30.

Announced in a March 31 email from Gates and Stan Wearden, vice president and provost, to faculty and staff, VSIP is offered to tenured, full-time faculty who have been

“We certainly have identified that we need to bring into alignment our resources and expenditures, and personnel are our largest expense category,” Gates said.

As reported March 30 by The Chronicle, more than two-thirds of the college’s expenditures are allocated to instructional departments, including the cost of compensating faculty and staff.

According to Paula Epstein, a reference/instruction librarian, this is the first mass faculty and staff buyout offered by the college, although individual buyouts have been conducted in the past.

Gates said the overall goal of the program is to save the college money through a reduction in personnel. Gates said that even if some of the positions opened from participation in the program were filled, it would still create a savings for the college.

“We would anticipate that a certain portion of those positions would be replaced…but it’s common that you would replace it at a lower-level position so that it would have some longer-term impact for us financially,” Gates said.

Peter Carpenter, an associate professor in the Dance Department and president of Faculty Senate, said there was an initiative to create a mass buyout program during the Spring 2014 Semester when Louise Love was serving as the interim provost. However, the initiative was halted when Wearden assumed the position in the Fall 2014 Semester.

In addition to one year of annual full-time salary, benefits of the VSIP include compensation for unused vacation for staff, the continuation of tuition waivers—discounted tuition for employees, their spouses and children through Aug. 31, 2016—and the continuation of health, dental and life insurance coverage until Sept. 30.

According to an anonymous source, many members of the college are considering the program.

“There are a couple considerations as to whether or not to take it,” the source said. “The big one is insurance because the benefits are a problem. They’re only giving several months on that.”

Health insurance would only continue for an additional three months for participants of the program, some of whom could be under the age of 65—the required age to qualify for Medicaid.

According to Gates, participants of the program can continue their health insurance through COBRA after the three-month period ends.

“We wanted to try to be generous with people in this transition because there are a lot of different factors to consider, but it became financially unfeasible for us to offer more than that,” Gates said.

The anonymous source said an alternate consideration influencing the decision to participate is the possibility of another buyout program being offered in the future with longer insurance benefits. Gates said the college currently has no plans to implement another buyout plan in the future.

According to Gates, workforce reductions are a priority of the college. The first draft of the Strategic Plan calls for the creation of “3–5 year strategic hiring and workforce reduction plans, including buyouts for faculty and staff.” Gates said the VSIP aligns with this goal.

The anonymous source said possible participants must consider whether the next phase of workforce reductions would result in layoffs and firings without the benefits offered in the buyout program.

Those interested in applying for the VSIP must do so by May 5, and their last day of work will fall on June 30. Faculty and staff who accept a buyout cannot be re-employed in a full-time position for three academic years.