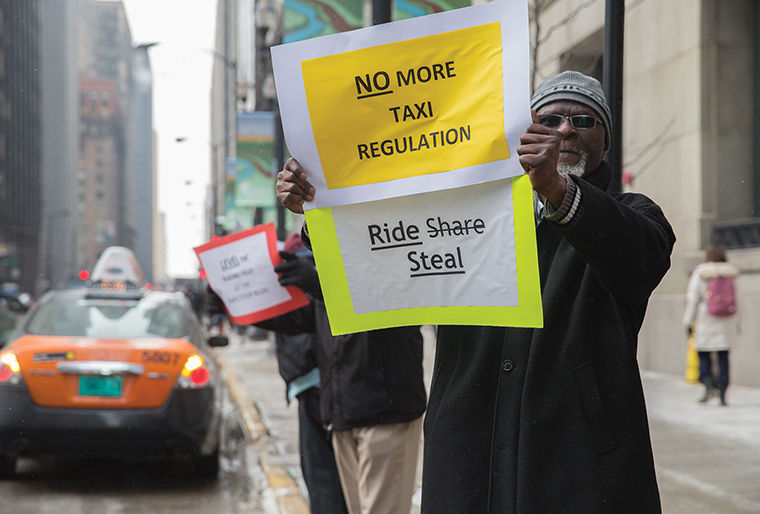 Chicago taxi driver Rocky Mmoma protests ridesharing apps, such as Uber, outside City Hall on Feb. 17 as other drivers circled the building from 6–10 a.m.

Taxi drivers honked their horns to protest the unregulated ridesharing industry, swarming Daley Plaza continuously, circling the block for hours until a press conference later that morning on Feb. 17 by the United Taxidrivers Community Council at City Hall.

Mayoral hopeful and Cook County Commissioner Jesus “Chuy” Garcia attended the press conference and was the only mayoral candidate to make a personal appearance. Alderman Bob Fioretti was represented by Amara Enyia, CEO of ACE Municipal Partners, who dropped out of the mayor’s race in December.

Clark, Dearborn, Randolph and Washington—the streets that surround Daley Plaza—were packed with taxicabs. The drivers had ceased picking up riders and drove around the block, the signs in their windows reading, “Ride Share Steal,” “No More Taxi Regulations” and “Uber: Show Us Your Insurance.” Bystanders seemed confused and annoyed.

The UTCC staged the “Occupy the Loop” protest because no mayoral candidate has addressed relieving the burden of regulations on taxi drivers, Enger said.

Ridesharing companies are not regulated the way taxi companies are, Khozindar said. Unlike taxi drivers, ridesharing app drivers are not required to have cab driver licenses, be fingerprinted or undergo quarterly vehicle safety inspections.

UTCC representatives said they want the mayoral candidates to state what they will do about taxi regulations so voters can decide what type of taxi industry they want and whether it should be regulated or not, Enger said.

“[Taxi regulations are] a significant issue because this city, a world-class city, depends on the taxi industry to support their tourism and convention business, which is a significant portion of Chicago’s economy,” Enger said. On his jacket, Enger wore a black and white button with a picture of Mayor Rahm Emanuel that read, “Taxi Industry Killer.”

As an ambulance and firetruck tried to push through the cluster of taxicabs, Khozindar shouted at the drivers to clear the street.

At its press conference, UTCC unveiled its proposal for creating a level playing field for the taxi industry and ridesharing companies, suggesting the city do away with chauffeur licenses and classes, mandatory background checks and vehicle inspections, as well as letting drivers set their own rates and charge surge prices.

“We don’t want to deregulate the taxi industry per se,” Khozindar said. “We want to trigger this conversation, so the city must do something about the other party, which is UberX, who is not regulated.”

Cook County Commissioner Jesus “Chuy” Garcia, said during the UTTC press conference that he was concerned for the welfare of the working class.

“The Uber program presents significant challenges to the quality of life of people who have been a part of this industry for a long time in Chicago,” Garcia said.

Ridesharing drivers do not have to go through the same licensing and insurance processes that taxi drivers endure, which prevent the taxi drivers from competing with ridesharing companies, Khozindar said.

“There is not a level playing field in Chicago, as it relates to the taxi cab industry or the service that moves people and transports people from one part of the city to another,” Garcia said. “As an act of solidarity with the plight of workers in the transportation sector who have provided service to Chicago, it is important that we create a level playing field in the city.”

Enyia, standing in for aldermen Fioretti, said taxi drivers are “the lifeblood of the city,” getting Chicagoans where they need to go.

“In the spirit of equity, the same regulations that are hoisted upon these drivers, which they abide by, need to be extended to any new players in this sector,” Enyia said.