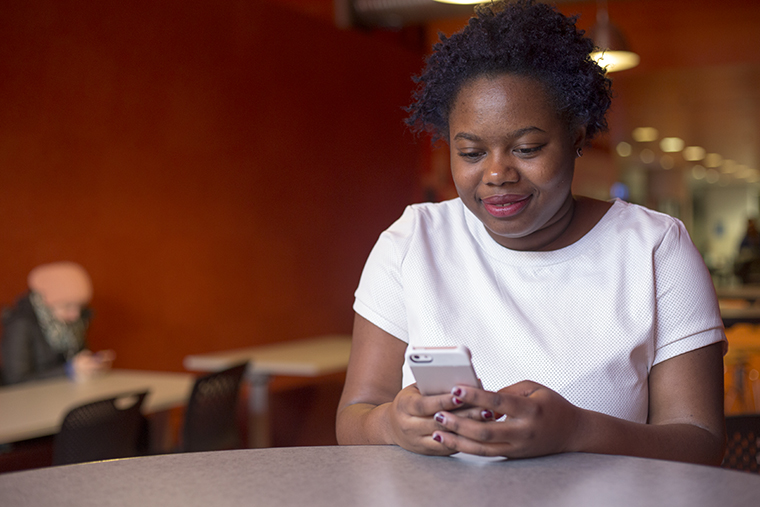 Cheryl Faux, sophomore marketing communication major, tweets and monitors the Internet in search of trends she can use in her marketing strategies.

Cheryl Faux, sophomore marketing communication major, became an Internet junkie when she started creating her Tumblr page, {365} by learning how to use Adobe programs like Photoshop to brand herself in a unique and professional way on the Internet.

In September 2013, Faux worked on a brand strategy project for Macy’s, and she is  completing a public relations internship at Blue Pearl Consulting, an operations consulting firm that specializes in health care and manufacturing industries.

Ever since she got her hands on a computer in middle school, Faux said she has been learning to use Photoshop to create eye-catching images for Twitter, Pinterest and Tumblr and to market projects for clients.

She is also the creator of “S–t Columbia College Professors Say,” a Tumblr account that posts professors’ quotes on top of completely unrelated photographs.

Before transferring to Columbia from Indiana University in 2013, Faux attended an Indiana Hoosiers men’s basketball home game, where the crowd made a Harlem Shake video that reached more than 11,000 views on YouTube.

Faux has recently created a student ad agency with fellow classmates. Although it’s a new idea, Faux said she expects it to be up and running soon.

The Chronicle spoke to Faux about her goals, digital strategies and cyber lifestyle.

THE CHRONICLE: How did you become so social-media savvy?

CHERYL FAUX: I basically grew up with computers. There were times when I was little and I was spending my entire day sitting at the computer, learning how to do stuff. I spent the majority of my time constantly learning information about how social media [and] advertising is changing. I’ve invested a lot of time in [social media] and I think it’s paid off.

CC: How did you become a brand promoter for Macy’s?

CF: [When] I was on the Internet looking for promotion internships and marketing internships, I came across this student promotions company called Fluent Group, and they were doing a promotion in Chicago for Macy’s. What my colleagues and I did was promote Macy’s around Columbia, more specifically in the South Campus Building, 624 S. Michigan Ave. We held a clothing drive that included clothes from many fashion shoots outside the buildings one day.

CC: What is your dream job?

CF: I really want to work for an ad agency once I graduate. I want to become an account planner or a strategist; those words get used interchangeably in the ad industry. What I would do as account planner is deal with the clients. Then there’s a creative [planner], who creates what the client wants, and what the strategist has to do is [fuse] what the client wants and what the creative is going to create. We have to figure out if this idea is going to capture the target market’s attention and make sure they see it, and [that] they want to participate in what the client is trying to sell them or get them to do. Specifically, I want to be a digital strategist. I like dealing with Internet campaigns, whether it’s on social media or banners—anything that requires technology. I’m not the traditional TV media strategist.

CC: How did you think of “S—t Columbia College Professors Say”?

CF: Last semester, I realized my professors would say these really hilarious things during class, and why not do something cool with them? I realized that this became really popular on Tumblr and it was completely random.

CC: Tell me about your student ad agency.

CF: It’s in the creative process right now. We only thought of it about three weeks ago. We already have a faculty advisor and are just getting excited about it.