HBO cracks down on ‘Game of Thrones’ watch parties 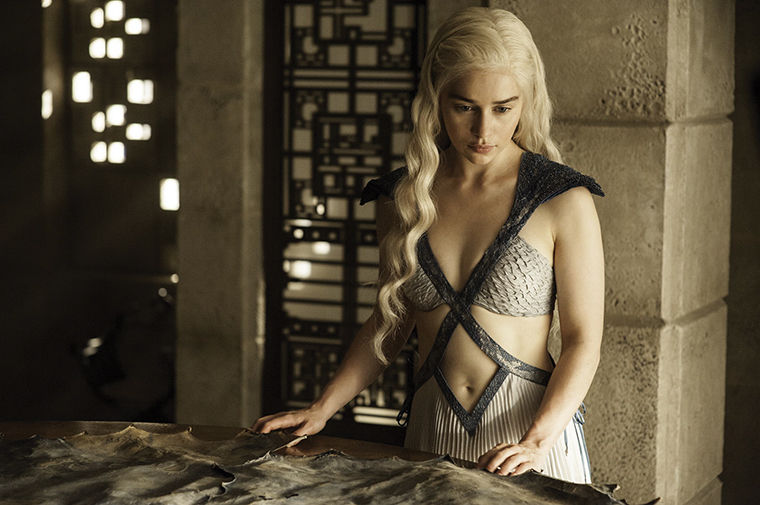 In this image released by HBO, Daenerys Targaryen, portrayed by Emilia Clarke, appears in a scene from season four of "Game of Thrones." The 5th season of the show premiered on Sunday, April 12, 2015. (AP Photo/HBO, Helen Sloan)

It’s not a nerd prom without a little disappointment. Geek Bar Beta in Chicago’s trendy Wicker Park neighborhood was planning to host a blowout for the “Game of Thrones” season five premiere earlier this month.

There were going to be costumes and product giveaways and of course, televisions showing the premiere of HBO’s fantasy drama. This was the first opportunity Geek Bar, which opened in October, had to show a live “Game of Thrones” episode, so the free party was promoted to attract new customers.

But it also attracted the attention of HBO, which sent a letter March 27 to Geek Bar telling the bar not to show “Game of Thrones” at its April 12 premiere party because HBO shows are not allowed to be screened in public.

“It’s like they’re thumbing their noses at geeks,” Geek Bar owner David Zoltan said. “The geeks are the core audience. Without the geeks, ‘Game of Thrones’ would have never gotten this far.”

Geek Bar is not the only establishment to be told “Game” over. HBO has been cracking down on bars that have aired episodes of its bloody drama, including a Brooklyn bar that received a cease-and-desist letter from HBO last week, according to media reports.

HBO spokesman Jeff Cusson said in a statement that HBO is a paid subscription service that “should not be made available in public establishments. When it does happen, it is of particular concern when there is an attempt by such places to profit off of [HBO’s] programming.”

The war between HBO and bars is not new but has recently become heated as HBO has battled piracy of the popular “Game of Thrones,” which drew a record 8 million viewers for the season five premiere. A decade ago, HBO sent cease-and-desist letters to bars and restaurants, including some in Chicago, that showed “The Sopranos.”

Northwestern University associate law professor Peter DiCola, who specializes in music copyright law, said it is HBO’s right to threaten penalties because screenings of the show at bars can be considered unauthorized public performances, which are illegal under federal law.

“You can have friends over [to watch the show] but when you’re at a bar with people, many of whom are strangers, that’s different,” DiCola said. “If you’re a bar owner, your disagreement is with Congress, not with HBO.”

But Zoltan said his beef is with HBO. He said the cease-and-desist letter was a “huge surprise” because “Game of Thrones” is so entrenched in geek culture. Despite the letter, multiple “Game of Thrones” posters decorate the walls and windows of Geek Bar.

“We love the show, and it’s part of what the people are talking about in the bar,” Zoltan said.

On Sundays, Geek Bar closes for a private event at 8 p.m. Eastern, which is the time “Game of Thrones” airs, Zoltan said. The bar stops serving food and drink. As to whether “Game of Thrones” is screened at the bar, Zoltan is coy.

“What happens at that private event is anybody’s guess,” Zoltan said. “We have to be very careful. We can’t afford to fight HBO’s legal team.”

It is unclear how many Chicago bars show “Game of Thrones” to their customers. Sean Loftus, bartender at Burlington in Chicago, said the bar hosts “Game of Thrones” watch parties every Sunday. One party even went viral last year after Loftus videotaped the bar’s reaction to a particularly gruesome death.

Loftus said he thought the screenings are legal because the bar does not charge a cover fee for the party and the TV’s screen is smaller than 55 inches, but HBO rules do not mention anything about TV size. Loftus did not respond to requests for further comment.

HBO’s legal tactics have scared off at least one bar owner. Fat Cat owner Cy Oldham said she tried to get HBO a few years ago to show “Game of Thrones” at her Chicago bar but was told by her DirecTV representative that bars are not allowed to have HBO.

For those bars that do show “Game of Thrones,” Frank Janisch has some advice: “Have good lawyers.”

Janisch, former owner of Frankie J’s, used to host elaborate “Sopranos” watch parties at his Chicago restaurant until HBO told him to stop.

Janisch said he ducked HBO representatives for as long as he could, and once he received the cease-and-desist letter by fax, he stopped showing the HBO mob drama immediately.

“Them slamming the door on me really stung me pretty good,” said Janisch, who now lives in Arizona. “Literally, HBO whacked me.