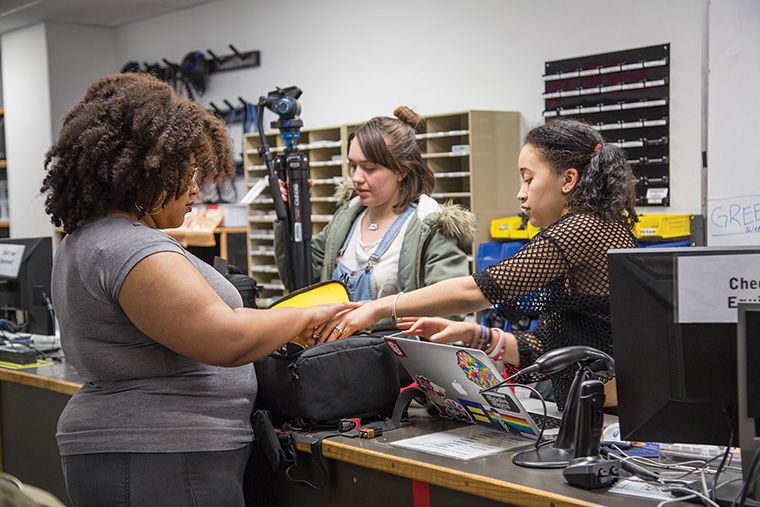 Some student workers will feel the sting of the budget crisis when they return next fall.

Mandated departmental budget reductions and the recent increase in the minimum wage will reduce the number of available on-campus jobs for the Fall 2015 Semester, according to Stan Wearden, senior vice president and provost.

The college announced in a Feb. 18 email that academic departments would receive budget cuts to help close the gap between the college’s revenue and expenditures. Prior to the announcement, the City Council voted last December to raise the minimum wage. The ordinance outlines a progressive series of increases with the first increase—rising to $10 an hour—to take place July 1.

“We have made it clear to everybody who is in a budget management position that they have to factor [the minimum wage increase] when they’re thinking about their budget for student wages for the fall,” Wearden said.

To accommodate the minimum wage hike, departments can reduce the number of available student work positions and have students work fewer hours so the overall cost of the worker would stay the same despite the increase in hourly pay, according to Wearden.

Erika Kooda, a sophomore double major in radio and business & entrepreneurship and the Student Government Association’s senator for the Radio Department, has been a student worker since she began attending Columbia. She said she is worried she might not have a job after summer break because of the student worker reduction.

“I’m going on tour [this summer] and won’t be making any money,” Kooda said. “I’ll come back with pretty much [nothing], so it was nice knowing that I had something to come back to when school started, but now I don’t know. It’s nerve-wracking.”

Kooda said it would be a hardship if the Radio Department paid her $10 per hour but for fewer hours. Kooda works multiple jobs to earn the money she needs and said she prefers working on campus because it is easier with her class schedule.

“Working on campus, your boss, supervisor or manager and coworkers all understand that you are going to school and your No. 1 priority is school,” Kooda said. “Also, my other job right now is out of the Loop, [so it costs] travel time, and trying to pick up more time there is not really an option.”

Larissa Husted, a sophomore art + design major, said she is one of six student workers at the college’s Digital Print Center, a printing facility for art + design students located in the 623 S. Wabash Ave. Building. She also said reducing the staff or hours at the center is not feasible because the center already struggles with its staff size.

“If they were to cut positions, we’d have to work incredibly long hours and it’s hard enough as it is,” Husted said. “It would be absolutely insane for us to have to cut people because we already have so few.”

Wearden said reductions in departmental student workers depend on several factors, such as the intensity of budget cuts and how many students are eligible to receive federal aid, so some departments will be affected more than others.

“[Some] departments won’t see any impact at all because they already have sufficient budgets to begin with,” Wearden said.

Wearden said the college will encourage students to apply for the Federal Work Study Program, which provides funds for part-time employment of students in need to help finance their education.

Cynthia Grunden, assistant vice president of Student Financial Services, said the college receives money from the federal government every year to fund eligible students’ on-campus employment. This year, Columbia received $631,000 for the Federal Work Study Program, and next year’s tentative award will increase to $685,000 after it is finalized in April, Grunden said.

Grunden said students receive varying amounts from the Federal Work Study Program based on financial need, but the maximum is $5,500 in an academic year.