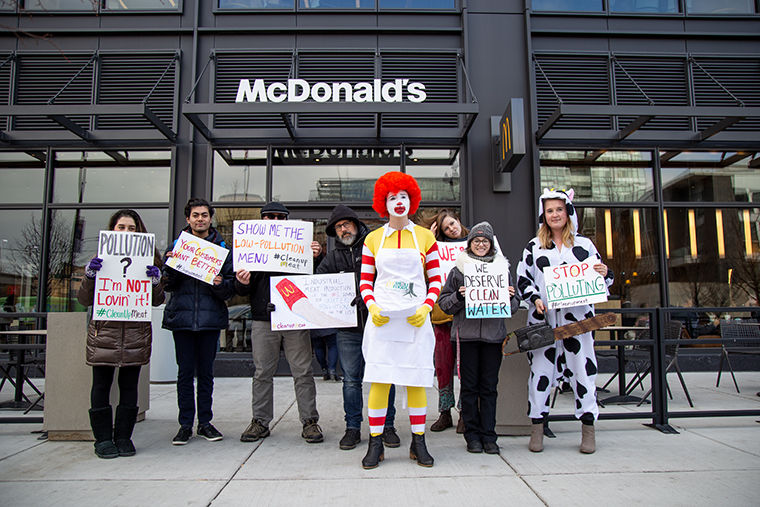 Consumer and environmental rights activists and local restaurants want people to think twice before picking up their next Big Mac.

During a Nov. 14 Rally for Clean Water, global environmental organization Mighty Earth’s McWholeFoods campaign, announced more than 1,800 petitions demanding that McDonald’s franchises stop purchasing meat from some of the worst polluters, such as Tyson and Cargill, according to a Nov. 14 Mighty Earth press release.

The rally was hosted by a coalition of Chicago chefs, businesses, farmers and community members, in front of McDonald’s Hamburger University, 110 N. Carpenter St.

“We cannot continue to accept the polluting practices of the meat industry as ‘business as usual.’ [It’s] a fundamental threat to our drinking water and a simultaneous threat to human health,” said Phoebe Chatfield, field organizer for Mighty Earth Chicago, during the rally.

The coalition is comprised of more than 50 local businesses, including Sweet Mandy B’s Bakery, The Budlong, Cornerstone Café and 1Body1Life.

“From the people who grow our food in Illinois to the restaurants that sell it on the streets of Chicago, the Chicago community wants to see concrete action from our corporate neighbor, McDonald’s,” said Victoria Higgins, a field organizer. “The Chicago community is watching; environmental advocates and farms across the state are watching.”

McDonald’s, the largest beef purchaser in the world, received an F on its U.S. Public Interest Research Group report card despite pledging since 2003 to improve antibiotic use practices by urging suppliers to use less chemicals with animals. Illinois PIRG is part of the coalition that hosted this event.

In a letter to McDonald’s CEO Steve Easterbrook, petitioners asked McDonald’s to boycott leading meat suppliers Tyson and Cargill until the suppliers take concrete steps to end deforestation and pollution.

“McDonald’s sustainable sourcing initiatives include conserving forests, beef sustainability and achieving our verified greenhouse gas reduction target,” read a Nov. 15 McDonald’s email to The Chronicle. “We are consistently engaging with our suppliers to communicate our expectations, as well as collaborating to accomplish these goals.”

Jody Osmund, farmer and founder of Cedar Valley Sustainable Farms, said McDonald’s needs to require suppliers to use more sustainable, environmental and animal-friendly practices to combat the destruction of the global environment and crops. According to Chatfield, both Tyson and Cargill have claimed to be working on improving company practices after public pressure, but have failed to commit.

“We’re making progress. We’re committed to leading industry efforts to collaborate with farmers on environmentally responsible crop production,” read a Nov. 15 email from Tyson to The Chronicle. “Earlier this year we committed to support improved environmental practices on 2 million acres of [land] by the end of 2020. This is the largest-ever land stewardship commitment by a U.S. protein company.”

During the 1980s, McDonald’s began using more recyclable packaging at public request. Ray Dybzinski, assistant professor of ecology at the Institute of Environmental Sustainability at Loyola University Chicago, urged McDonald’s during the rally to change again for the betterment of the environment.

Despite decades of criticism for its food and environmental policies, McDonald’s has the opportunity to become a leader for other fast food chains and meat buyers, Mighty Earth and U.S. PIRG players said.

“We’ve got big problems with industrial agriculture, but McDonald’s has a huge opportunity because it’s such a big buyer,” Dybzinski said.”If they make a change toward more sustainable food systems, that can have a huge impact.”

As a supporter of U.S. PIRG’s efforts to eliminate harmful antibiotics used in cattle, which may pose significant public health risks, Illinois State Sen. Daniel Biss introduced legislation in February in the Illinois Senate to restrict the use of antibiotics only for animals in need of them, as prescribed by a licensed veterinarian.