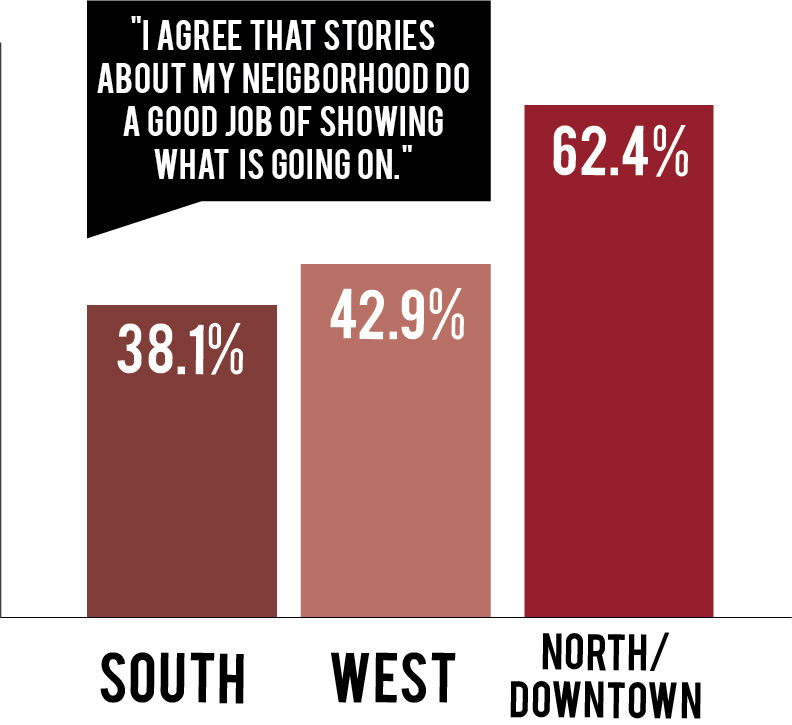 In Chicago’s South Side, residents know the crime statistics and have become accustomed to images of mothers crying in the street with yellow tape around the crime scene, said Mary Datcher, managing editor of the Chicago Defender.

What the community hungers for is the story behind the numbers, of a mother’s faith sustaining her in grief—a narrative that large Chicago publications often ignore, Datcher said.

A study released Jan. 10 by the University of Texas at Austin Center for Media Engagement found that Chicago’s South and West side residents think Chicago’s news coverage does not accurately represent life in their neighborhoods. Researchers surveyed 900 locals via phone from the north, south and west regions, and more than 50 percent of West and South side residents said news coverage of their neighborhoods is too negative.

Fifty-one percent of West Side and 41 percent of South Side residents said journalists quote the wrong sources.

Emily Van Duyn, a research associate for the study, said the center translated the survey into Spanish to make sure every Chicago area was represented. The study should serve as a “report card” to Chicago media to consider its coverage, she said.

“My guess is that this is happening in neighborhoods all over the country, in cities with the same [distinct] segregation,” Van Duyn said. “This is a [future] conversation that needs to happen.”

Gloria Williams, an Englewood resident since 1970 and founder of Voices of Englewood, a local nonprofit that promotes community engagement, said 90 percent of the neighborhood’s activity is positive, but the media only focuses on the 10 percent that is negative.

Smaller publications such as Chicago Crusaders or the now-defunct DNAinfo covered the community accurately, but the Chicago Tribune and Chicago Sun-Times are interested in “major crisis” stories, like the four Englewood high schools closing, Williams added.

“People in the community do not trust the media or feel it accurately represents them,” Williams said. “We’re not being recognized for the good work that we are doing.”

Williams said residents often “shy away” from interviews with journalists because their words are misrepresented.

Michael Romain, the editor for Austin Weekly, a publication that covers Chicago’s West Side, said there is a misconception that crime victims in low-income neighborhoods either did something to justify the crime or are not working to make the area safer.

“It’s common for people who don’t have direct experience about a way of life or particular place,” Romain said. “[Journalists might] cast [neighborhoods] off or speak of them in a generality that is often offensive and grossly inaccurate.”

As a small newspaper, the Austin Weekly does not cover crime or shootings because they happen too often, Romain added. Instead, the newspaper works on hyper-local news and follow-up stories about crime that reporters from the Tribune do not have the opportunity to tell.

“It’s dangerous when cynicism about larger media outlets extends to neighborhood media outlets without any type of nuance,” Romain said.

Dan Haar, editor of the Chicago’s Tribune Breaking News desk, deals directly with what is often perceived as the negative news about neighborhoods.

“Our work takes us into neighborhoods where often, unfortunately, there are some of the worst moments in people’s lives and we do the best we can do,” Haar said.

The Tribune tries to cover the effects of violence in Chicago, he said.

Haar added that Tribune reporters try to listen and help the public understand the problems in these neighborhoods.

He said local papers are rooted in their communities and have a better perspective of what happens in their neighborhoods. While the Tribune tries to follow up on stories in the South and West sides, it is a large publication that covers the entire city and does not always have the resources.

“Local papers stay on issues that are promised and not delivered, and [Chicago] needs that to make sure those voices are heard,” Haar said.

But a lack of representation in the newsroom is the heart of the public’s distrust in the media, Datcher said.

“There are very few people of color in these newsrooms,” Datcher said. “There are excellent reporters that try to get down to the heart of the matters, but it is hard to put a genuine spin on it if you don’t have an understanding of the people and the history of the community, or how to frame the story without it feeling like a death notice.”

Williams said a journalist’s race or background does not matter as long as their reporting is accurate.

Adequate news coverage balance is necessary across the city, Datcher said. As a black newspaper, the Chicago Defender reports the accurate narratives the community craves, she said.

The Chicago Tribune and Sun-Times did not respond to questions about their newsroom demographics as of press time, but Haar said he agreed with Datcher’s comments, and that it is important for reporters to go back to scenes, listen to the people and understand neighborhoods.

Van Duyn said an interesting finding from the report was that, despite feeling poorly represented by Chicago news media, South and West side residents are more interested in volunteering to participate in a public meeting than North Side residents are.

“Before [journalists] start trying to change their rhetoric or coverage, it might be important to just talk to people and see what they think,” she said. “[This could] be an opportunity for news organizations to do something—to engage people because they want to be engaged.”

Chris Fusco, editor-in-chief of the Sun- Times, said in a Feb. 2 emailed interview with the Chronicle that he agreed more coverage of Chicago’s West and South side neighborhoods is needed.

“The question is: How do we afford to fund this coverage as we face the same financial challenges as other news organizations across the country?” he said. “My hope is that the coverage we provide is fair and balanced, that people will support us because of this and we can keep adding more coverage in the future.”