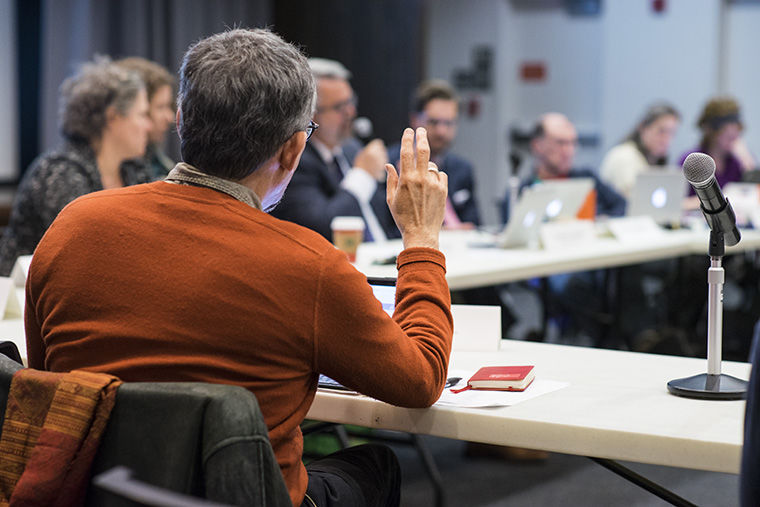 Faculty Senate met Nov. 11 to discuss how to support students struggling with election outcomes and progress made on the Graduate School proposal.

Columbia’s Faculty Senate met for the first time following the presidential election, at which  the top of the agenda was how the college will support students struggling with the results.

Greg Foster-Rice, Faculty Senate president and associate professor in the Photography Department, said at the Nov. 11 meeting that even though it may be out of the Senate’s jurisdiction, he encourages faculty to turn their classrooms into safe spaces for discussion of the election.

“It’s not just about letting a student open up with their feelings, but it’s also about giving them the opportunity to reflect on how they’re going to respond to the election in a nonpartisan fashion,” Foster-Rice said. “I would encourage you to help them find constructive outlets for their concerns, remind them that we are a caring community who respects all political persuasions but also protect out community from hateful rhetoric that goes beyond protected speech.”

Michael Caplan, an associate professor in the Cinema Art + Science Department, said he does not think the classroom is an appropriate place to discuss politics, except in the broadest sense of the topic.

“It [has] potential to open up a can of worms that I don’t think is really helpful to the students,” Caplan said.

Disagreeing with Caplan, Hilary Sarat-St. Peter, assistant professor in the English Department, said professors should take this opportunity to teach their students.

“The can of worms is already open,” Sarat-St. Peter said. “Our society has opened it. We, as higher educators, can use this as a critical power tool [to show] that you can make some meaningful dirt cake out of the can of worms.”

Eric May, an associate professor in the Creative Writing Department, said he had a student come into his class weeping over the results of the election. May added that it is up to instructors to promote the most conductive conversations in their classrooms and decide when it is best to engage in political conversation.

Alton Miller, an associate professor in the Communication and Media Innovation Department, said he could not imagine not discussing the election with his students in class.

“If there were ever a teachable moment, this is a teachable moment,” Miller said. “Anybody who feels they can handle [discussing] it in the classroom, listen to your students and don’t just categorically decide it’s not the place to discuss politics.”

In his presentation, Rasinariu provided a passage describing the school’s mission, organizational system and functions. He said the graduate school’s goal is to optimize, improve and expand its higher education.

Sarah Odishoo, an associate professor in the English Department, asked Rasinariu about the importance of investing in such an expensive Graduate School if Columbia’s enrollment continues to drop.

Responding to the question, Wearden said the board of trustees has approved the already allocated funds as part of the Strategic Plan and said the enrollment is dropping because of Columbia’s lack of graduate programs.

“The creation of the Graduate School is to grow enrollment up again in a healthy way.” he said.

The presence of a graduate school or graduate program makes Columbia eligible for certain kinds of funding and support, said Jeff Abell, an associate professor in Art & Art History Department. He added that the school will bring more resources to the college.

Scott Hall, senior lecturer in the Music Department, said he has seen the benefits of undergraduates working with graduate students as they act as mentors and guides. Because many graduate schools are now being offered online, he added that he fears the possibility of mentorship will be eliminated if the college does the same with its own graduate school.

Rasinariu added that the interaction between students will make Columbia a better college.

“This is another important benefit of having a college graduate school; to facilitate exactly this type of connection between graduates and undergraduates,” Rasinariu said. “And that is actually increasing the overall value of education at [Columbia].”