CPD Superintendent: ‘Law enforcement is under scrutiny like never before’ 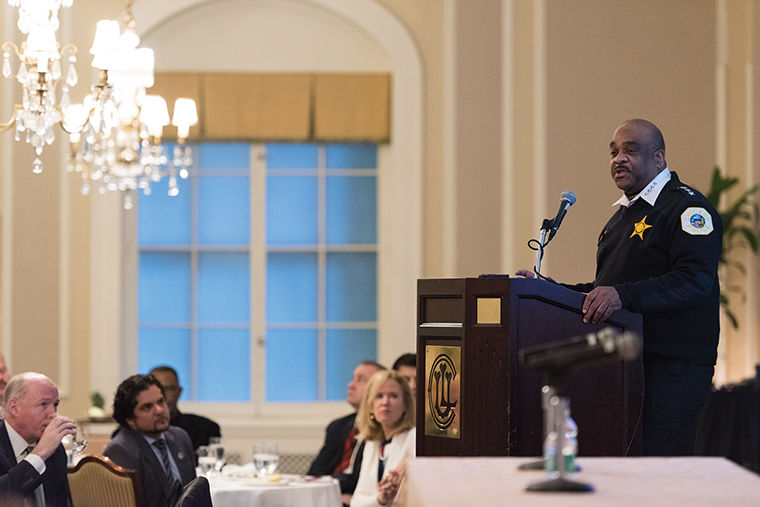 For the first time in history, the Chicago Police Department is asking for community input on its Use of Force policy to improve “de-escalation” techniques and the “sanctity of life” as well as repair recent distrust between police and citizens, according to CPD Superintendent Eddie Johnson.

“If you look across the country, law enforcement is under scrutiny like never before,” Johnson said. “Having said that, we can fix this.”

Johnson said CPD has already received solid feedback on the policy and encouraged others to provide insight until the Dec. 5 deadline. Civilians can view or make recommendations on the draft on the department’s website.

“A draft policy in the public domain for [the community] to comment on is transparency in practice,” Kirkpatrick said. “It is not cheap talk, and that takes courage.”

According to the draft, force has been defined for the first time as “any physical effort by a department member to compel compliance by an unwilling subject.”

CPD officers are required to use physical force only when there is no reasonable alternative and must use the least amount of force necessary based on the circumstance, the draft states.

The draft defines deadly force as “force that is likely to cause death or great bodily harm.” This includes—but is not limited to—an application of a chokehold, striking a subjects’ head with a hard or into a hard, fixed object or use of a firearm. CPD officers are only permitted to use deadly force in order to prevent death or “great bodily harm” from an immediate threat, the draft states.

The new policy would also require CPD officers to offer medical aid to those injured in a use of force incident and intervene on a victim’s behalf when they observe policy violations. The policy also creates a minimum 30-day administrative duty assignment for officers involved in a shooting incident.

According to Kirkpatrick, every officer will be trained in the policy before it goes in effect. Three hundred of the approximately 12,500 CPD officers would be trained at a time because of limited space, and all officers would be required to undergo a 16-hour de-escalation training course.

Emilie Junge, an attorney who attended the presentation, said she was not impressed by the new policy proposal and has doubts whether CPD officers and the police union will take the de-escalation training seriously.

“The guidelines do not seem [like] that much of a change,” Junge said.

The progress of police de-escalation training and accountability policies has been too slow, according to Junge. She also said the department should emphasize more training on dealing with citizens with mental illness.

Kirkpatrick said engaging appropriately with people who suffer from mental illness will be a priority in the 16-hour de-escalation course. CPD also has a goal to have 35 percent of its sworn staff undergo a 40-hour “crisis intervention” course, which will go into more depth on interacting with citizens with mental illness.

Junge said Johnson making the policy draft public and allowing the community to give feedback is something that should be acknowledged. However, she said the police union might act as a barrier to implementing effective change.

“The public will have a role in [the policy],” Junge said. “Whether it changes depends on whether [the public] is willing to stand up to a police union that is little more than an organization that protects police at all costs.”

Johnson said a police officer’s work has never been easy. As a 28-year veteran, he said he knows an officer must make split-second decisions, and some of those decisions have faced criticism.

“Unfortunately, some folks in society feel police have not been responsive enough, and sometimes, police feel they are not supported enough,” said Chris Robling, a senior counselor of ULC.

At the end of the presentation, despite some criticism from event attendees, Johnson remained firm that the policies and training of CPD will result in effective law enforcement and is optimistic about the future.

“Regardless of what happens across the country and what the next administration brings, we are going to move forward with reform,” Johnson said. “When we get done with this, we want CPD to be a model agency for law enforcement across the country.”