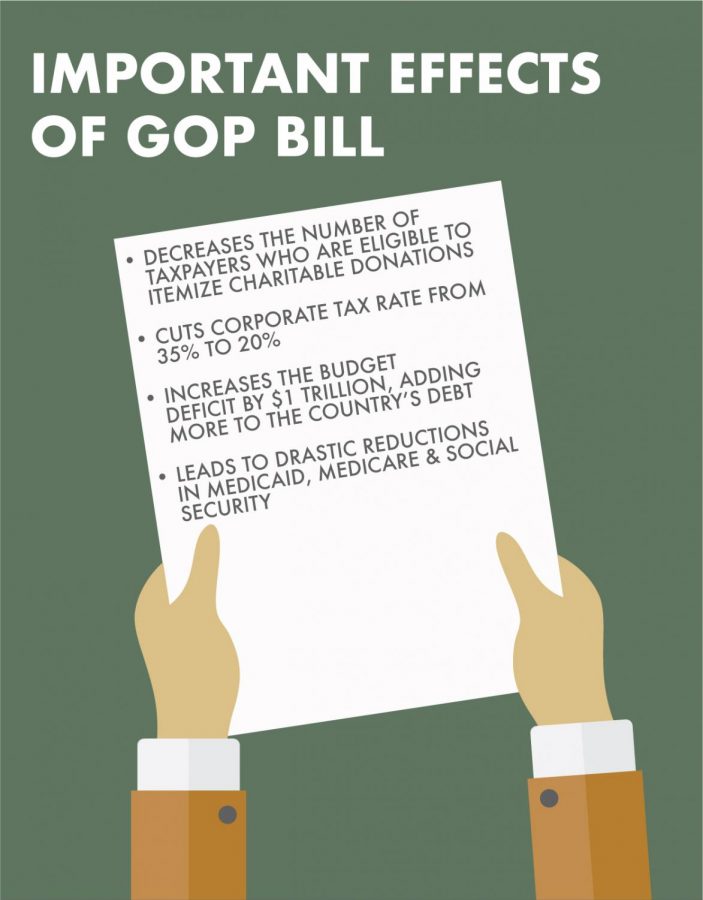 The U.S. Senate passed a tax reform bill Dec. 2, bringing with it drastic changes that many will struggle to grasp.

Tax code’s complexity isn’t what makes the bill or its consequences baffling. The Republican-majority Congress worked to ensure a nearly clueless public as legislators reviewed and voted on a monumental, 479-page bill in less than six hours. The House passed a more draconian bill on Nov. 16.

Both bills repeal the Affordable Care Act mandate requiring individuals to purchase health insurance, which will leave about 13 million without coverage and skyrocket premiums. The bills are expected to put a dent in the nation’s deficit by at least $1 trillion, triggering automatic reductions in programs like Medicaid, Medicare and Social Security.

The Senate bill would tax private colleges with at least 500 students for endowments valued at $250,000 per full-time student. Taxing a large revenue source for many colleges can lead them  to seek other methods to fill budget shortfalls, such as raising tuition.

The House and Senate are now ironing out the differences between the two bills, and there is no guarantee the parts damaging to students in the House bill will not be included in a final version.

As many worry how the tax bill will affect them in the coming years, some—other than the Republican lawmakers who passed the bill—are celebrating: large corporations and the wealthy. The bill would cut the corporate tax rate to 20 percent from 35 percent. The House bill also repeals the estate tax, allowing the rich to pass on property and wealth to their heirs tax-free. The Senate version raises the maximum to go untaxed from the current $5.5 million to $11 million.

Congress’ tax reform serves as a reminder that we must carefully scrutinize every branch of the U.S. government. President Donald Trump continues his incendiary comments and hateful rhetoric, distracting us from developments in Congress. Lawmakers who continue to brazenly pass laws putting millions at risk hope Americans will not pay attention to the dangerous work they execute because of the president, or because people are unwilling to educate themselves on something as dense as tax code.

Everyone—young and old, college-educated or not—must band together and force the government to represent the people.