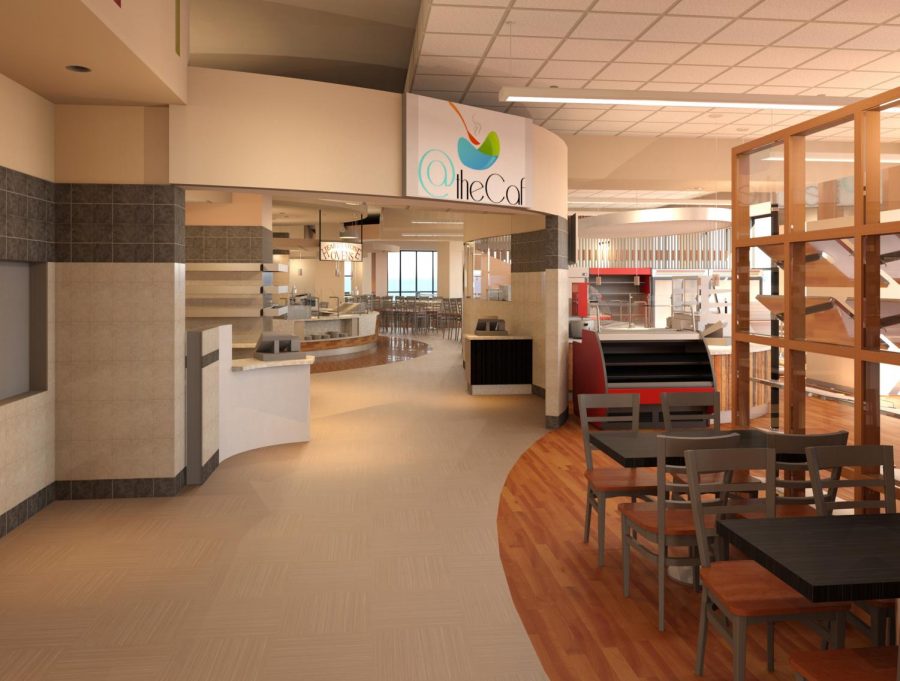 The UC’s cafeteria is being completely remodeled in order to reflect the building’s new food service company.

The University Center will begin its first full renovation of its cafeteria beginning in December.

The construction is in conjunction with the residence hall’s new partnership with Chartwells, a food service management company and part of Compass Group USA. According to a Nov. 13 press release, the University Center serves nearly 1,700 student diners, and this change will bring students an interactive dining experience once it is completed.

Marlene Levine, executive director of the UC, said the remodeling is timely because it coincides with the transition between food service management companies and gives the UC the opportunity to build the dining space based on Chartwells’ culinary needs.

“When you have new chefs and new menu platforms coming in, you want your space to reflect the philosophy of engagement with residents and students and the way that the interaction occurs with the chefs,” Levine said. “The new management company really has a very strong commitment to student satisfaction. They want to engage the students in what they’re eating and provide more information and custom cook for the students as well.”

Levine said the construction will occur in three stages, each managed in small, walled-off sections so the renovation can be completed while maintaining service to students.

“At all times, all of the current variety of foods will be served and we’ll continue to maintain the same level of seating,” Levine said. “Our cafeteria is open all day long.  People flow in and out so we really do have a nice big space to work with. We’re certainly able to service without interruption.”

Alisha Mendez, a UC resident and a senior cinema art + science major, said she eats in the UC cafeteria approximately four times per week and agrees the Cafe needs renovation.

“They need to add more variety to their food,” Mendez said. “I like the idea [of face-to-face chefs] so I can see exactly what they are putting into food.”

Mendez said she does not think the construction will affect her experience in the UC at all, but she said she is looking forward to having new dining options and more up-front interaction with the chefs about the food choices.

Mary Dunn, district marketing manager for Chartwells, said the company saw an opportunity to partner with the UC to form relationships with four different colleges that use the space. She said the construction will help accommodate the space for the flow and experience that Chartwells plans to evoke by allowing for their specific style of resident dining.

“[The construction] will be a really good way to get our chefs out in front and to really highlight some of those action stations and made-to-order stations, as well as our new retail locations,” Dunn said.

Jacob Peck, interim director of Chartwells, said the construction is a commitment by the company that aligns with the long-term partnership they plan to have with the UC. The company will cover the cost without affecting the price of student meal plans, he said.

He said the third stage construction will focus on the overall environment of the dining hall. Peck said the new dining space will include made-to-order sushi, Chicago street food inspired by local neighborhoods, soup, salad, and pizza stations, as well as a pasta bar, a new deli and a grill.

“Phase three is going to focus on the center of the room, and we’re going to have our infamous ‘eat, learn, live’ station,” Peck said. “It’s going to be more about educating students’ healthier options, our ‘balanced you’ program and then we’ll also be able to focus some fun things where we’ll be able to do that in front of the students instead of cooking in back. It’s going to be more exhibition-style cooking.”