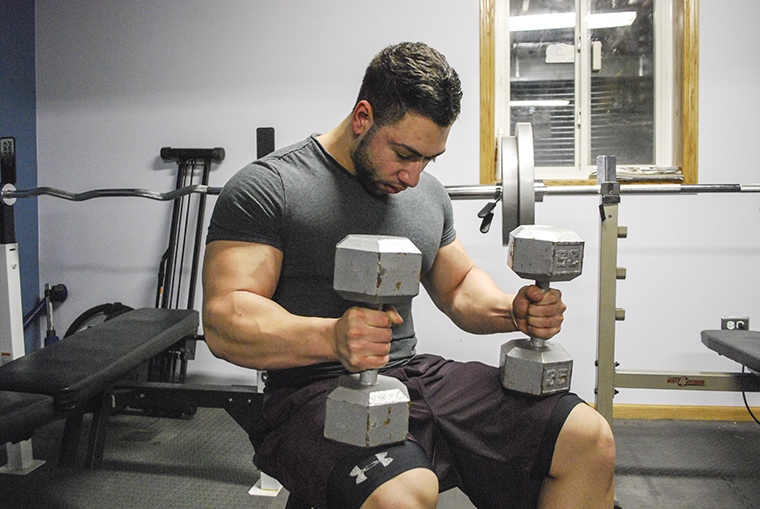 Originally a tae kwon do fighter, Jake Maali became interested in computers and bodybuilding after graduating high school. He is now majoring in network architecture and design at DeVry University and works out six days a week to maintain and improve his physique.

Maali grew up in Oak Lawn, Ill. before moving to Orland Park, Ill. in 2004, where he currently resides. He competed in tae kwon do for two years in high school, becoming a half red, half black belt while maintaining a perfect 16–0 record.

The DeVry senior has been a bodybuilder for 5 1/2 years and has competed in five National Physique Committee amateur competitions, which typically feature 9–12 competitors. He placed 7th or better in each competition, 4th place being his highest.

The Chronicle spoke with Maali about his healthy lifestyle choices, perserverance and his experiences as a bodybuilder.

THE CHRONICLE: What prompted you to switch from tae kwon do to bodybuilding?

JAKE MAALI: It was just too much conditioning in tae kwon do. [I] saw some friends of mine lifting in high school and gave it a shot, lifted some weights. I wanted to do what everybody else wanted and get more muscular.

JM: Just coming out of high school, [I ate] everything. Eating a lot of fast food; wasn’t really watching my diet. [I] kind of just needed a hobby and I starting lifting weights. That’s really when I started counting calories and watching those fats in fast food. Overall, the change in time really makes you a more confident person when you look and feel better.

CC: What is your bodybuilding inspiration?

JM: It’d probably be just living a fit and healthy lifestyle [and] trying to follow the greats like Arnold [Schwarzenegger] or the king, Ronnie Coleman.

CC: Who inspires you to care more about bodybuilding?

JM: It’s just the people at the gym– trainers, friends, all the new people you meet. Everybody’s got something; one great muscle group. Really we all just kind of influence each other. It’s kind of like a fit family.

CC: What are your short- and long-term goals with bodybuilding?

JM: Short-term, I can see myself possibly going back on stage in the next couple seasons depending on if I can really cut down some fat. Long-term, just living a healthy lifestyle, just being fit.

CC: Describe what is looked for during bodybuilding competitions.

JM: They’re pretty tough. They cover all the muscle groups of the body and then of course ending with the most muscular pose, which is the one that you’ll see all the greats doing, all the Olympia. They’re looking for two things: They’re looking for symmetry and muscularity. It’s not who’s the biggest and it’s not who can lose the most fat. It’s who looks the best. It’s who looks the most even.

CC: It’s unusual to see a tech guy bodybuild. Do the two interests ever collide?

JM: That’s a big contradiction—usually the tech guy isn’t someone that’s found in a gym, just because in the technology field it’s a whole [other] hobby of its own. It gets overwhelming at some points, but being that they’re from two different worlds, they’re on different sides of a spectrum, they never really cross. The confidence from lifting does give me a boost, especially when job hunting or when talking to I.T. clients.