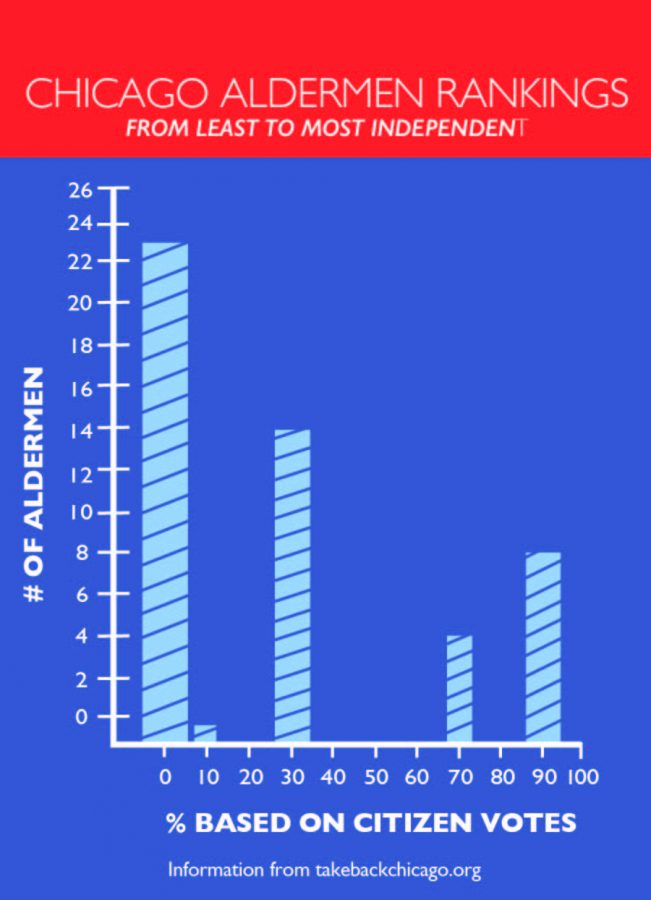 Grassroots Illinois Action launched a new campaign allowing Chicagoans to view their alderman’s “rank” compared to other aldermen based on their City Council votes online.

GIA’s new website, TakeBackChicago.org, was designed to call attention to aldermen who have voted consistently with corporate interests rather than community interests. The website ranks Chicago’s aldermen on a “people score” scale that ranges from “rubber stamp” to champion. If an alderman is identified as a “rubber stamp,” he or she votes consistently in favor of Mayor Rahm Emanuel’s programs.

Nathan Ryan, the communications director for GIA, said the organization  aims to make Chicago a better city by showing citizens that they can select better city officials.

“The idea of TakeBackChicago.org came from the experience of a lot of GIA members with aldermen claiming to stand with working families and then voting against those interests when it actually came time to take votes,” Ryan said. “There’s a lot of things that aldermen do to make it look like they’re supportive on issues [while not] actually doing anything meaningful.”

The aldermen’s scores are based on their voting record and feedback from GIA members, community leaders across the city and other public records, according to the GIA press release.

The website currently lists two ordinances that are awaiting a vote in City Council: The Chicago minimum wage ordinance, which raises the minimum wage to $15, and the Keeping the Promise Affordable Housing Ordinance, which is a campaign designed to eliminate homelessness and decrease housing rates, Ryan said.

“There is a clear need for a tool to help Chicago residents see which aldermen are really voting to support working families and which ones are allowing Mayor Rahm Emanuel to sell off our city piece by piece,” said Amisha Patel, executive director of GIA, in a press release.

The website displays a variety of yes-or-no questions that are analyzed to determine the alderman’s “score.” The questions address issues such as their vote on minimum wage or their support of the Chicago Teachers Union strike in 2011. Each alderman’s page also describes when he or she took office, the frequency of voting to support Emanuel, their key votes since 2011 and whether the official was elected or appointed.

Action Now, an organization that advocates for a $15 minimum wage in Chicago, collaborates with GIA.

“The City Council’s rubber stamping of Emanuel’s corporate agenda has hurt Chicago and devastated black and brown communities in the South and West sides,” said Katelyn Johnson, executive director of Action Now, in the press release. “Our communities deserve elected officials who value residents’ needs over corporate dollars. It’s our hope that this new tool, our continued work and efforts across the city will hold our aldermen accountable to the working families they claim to represent.”

Among the four that received a 90 percent on the “people score”  scale is Alderman Bob Fioretti (2nd Ward), who announced his candidacy for mayor in September.

Funding for the development of the website was provided by small individual donations, which were collected through the crowdfunding site IndieGogo and at fundraisers, the press release stated.

The entire project of TakeBackChicago.org took about a year to put together, Ryan said. The press release states that GIA intends to add additional features to the website leading into this year’s municipal elections and beyond.

“Right now, it’s based off of a score card of voting data, and what we want to add to that is contribution data,” Ryan said.

Contribution data would break down where officials get campaign donations, from connecting donors to potential political clout-holders, Ryan said. This will make the aldermen’s funding more transparent.

“It’s election season, and many of the aldermen responsible for policies that have hurt so many families and devastated neighborhoods will be making promises and claiming to stand with communities,” Patel said in the press release. “Our goal is to show what aldermen are actually doing, and by doing so help make our democracy better.”