Graphic novel to open up imagination about civic, urban engagement 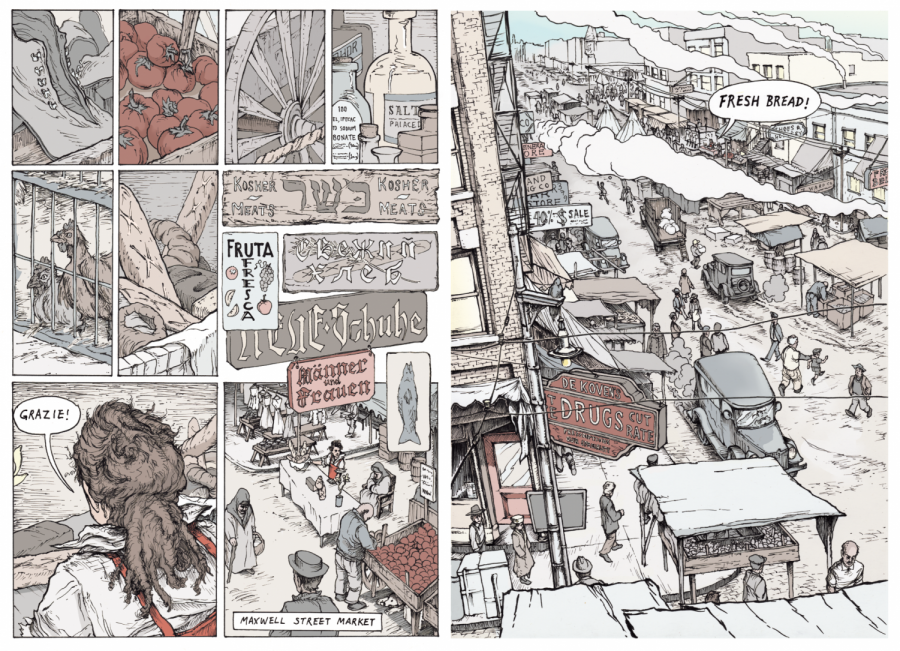 A scene from the graphic novel depicting 1928 Chicago.

Artist, illustrator and educator Devin Mawdsley knew it was time to create an arts collective when he heard about the Chicago Architecture Foundation’s plan to create a new educational graphic novel for local high school students.

The novel, based on Walter D. Moody’s 1911 textbook “Wacker’s Manual,” combines arts, education and architecture in a 144-page color graphic novel. The narrative follows the experiences of teens in Chicago’s past, present and future as they grapple with what it will take to design the city they want, need and deserve.

“It’s really important stuff for future citizens of the municipality, especially since we are concentrated—as a nation and as the world—into urban spaces,” said Mawdsley, a teacher at the Chicago High School for the Arts in Humboldt Park along with Bayer and Lin.

The reinvention of the book with the engaging concept of the graphic novel drew him to the project, which he found out about from Gabrielle Lyon, CAF’s vice president of education and experience, when she publicly called for artists to help create the novel in 2015.

“No Small Plans” is complete and will be distributed for free to Chicago Public Schools in September and take the place of “Wacker’s Manual.” Lyon said CPS schools have already shown a great demand for the novel, and teachers can request it for their class.

Lyon said the demand has poured in not only locally, but nationally. She added that a freshman class called “Chicago: Access, Activism, Agency” co-taught and co-authored by Joan Giroux of the Art & Art History Department and René King of the Design Department at Columbia in the Fall 2017 Semester will use the book.

The novel, which is currently being funded on Kickstarter to raise a printing budget, will be sent to press in May and available in July. In August, CAF will host a teacher training in time for the book’s classroom use in September.

CPS and the Chicago Public Library had a hand in contributing  the historical information to the book as well as distributing it for free to students.

“Especially in Chicago, we have a lot of kids with very little access to what are supposedly our collective assets because of a lack of funding and inequity,” Mawdsley said. “Our narrative is trying to reveal and compel the understanding, the importance and certain roles of civic engagement and concepts around urban planning.”

Bayer, who is well-versed in Chicago’s history and its flaws, came on board to showcase the city’s rich architectural tradition while encouraging arts and education, she said. Along with giving students a better understanding of design and civic engagement, Bayer said the visual teaching approach makes the novel stand out.

“[The students] are very visually savvy; [the novel] feels more real and puts them in the space,” Bayer said. “It was one of the reasons why we wanted it to be kids on the ground moving through the city as a way to see themselves, see those places and make connections to the world they are in.”

Lyon said Eyes of the Cat was a perfect fit for the novel because all the artists represent part of the novel’s story; having teachers from Chicago High School for the Arts and Reed, a CPS graduate, bolstered their impact on the novel.

“The project comes at a really critical time,” Lyon said. “People do care about young people, civic engagement, the built environment—we have hit a nerve. People understand how important this project is and the artwork is amazing.”