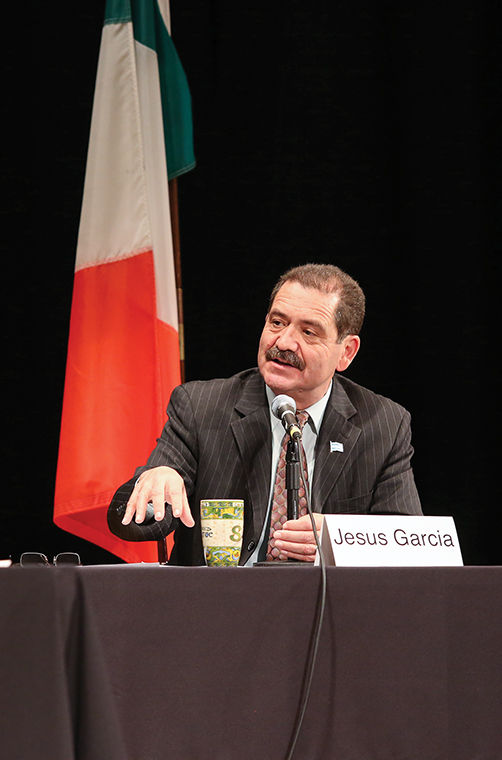 At the forum, sponsored by the Portage Park Neighborhood Association, the candidates were civil to one another except for occasional quips against Emanuel.

Garcia said school board officials would be elected based on geographical districts if he is elected mayor.

The hall at the center never reached half-capacity. The crowd mostly consisted of older Irving Park residents in the 42nd Ward.

After each candidate spoke, attendees would trickle out, staying only long enough to show support for their preferred candidate. One by one, the candidates were brought on stage for 30 minutes each for a moderated discussion with Ken Davis, host of “Chicago Newsroom,” CAN TV, who asked the candidates about crime, education, the modernization of O’Hare International Airport and pension plans.

At the end of each Q-and-A session, Davis gave the mayoral candidates a chance to explain why they should be elected.

First on stage, millionaire entrepreneur Willie Wilson sported a wide grin and a large, bright green sequined bow tie. Before the forum began, Wilson stood in the foyer outside of the hall, greeting attendees and shaking hands. The space was an a comfortable setting for Wilson, who openly discussed his religious beliefs and humble beginnings. A few members of the audience wore buttons showing his grinning visage.

“The struggle kept on going until [my family] had a chance to get from there to get up north here,” Wilson said. “After we struggled for a while, the Lord blessed us to be successful in business, and with our success in business, we reached back and helped others.”

Davis asked Wilson repeatedly to clarify himself when he said Chicago does not need to deploy more police officers, but instead the police force must be desegregated.

“In the police department, there is not one African-American or Latino or Hispanic in the detective division—less than 10 percent when it should be 32 percent,” Wilson said.

On the campaign trail, Emanuel announced he would hire 350 additional police officers this year and start a pilot program to test the use of body cameras to monitor the city’s police activity.

When Davis asked Walls why anyone would be crazy enough to run for mayor—which was the opening question to all candidates—Walls said, “Because there are challenges ahead and we love challenges. And we have solutions to the problems.”

Walls took a jab at Emanuel, saying he would not have closed 50 schools. He said he would have retained those buildings as educational facilities and utilized them for educational purposes.

“Communities are built around parks, schools and libraries,” Walls said. “If you don’t pay attention to the needs, if you don’t prepare for the growth of a community, the community will not grow.”

Garcia said his entire public service career has prepared him to be the next mayor of Chicago.

“Chicago is at a crossroads,” Garcia said. “I want to put this city on a different road. I think the neighborhoods have been left behind, particularly over the past four years, and I think that I have the wherewithal to build a multiracial, multiethnic, across-state coalition of Chicagoans to put neighborhoods at the center of city governance. ”

Responding to an allegation made in a television ad by Emanuel that claimed he voted for the biggest tax increase in the history of Chicago, Garcia said, “[Emanuel] has more fear of me than I of him. [He is] a fearful mayor with lots of money to spend.”

When candidate Bob Fioretti took the stage he announced that he was ready for a fight, but he spoke somberly about the state of crime and education in Chicago.

“What have we done?” Fioretti said. “People talk about these two cities, one Chicago, this Chicago. Then I see what is happening. I have estimated a number of times from 75th and Halsted, walking through the neighborhoods, seeing the hundreds of foreclosures in wards, maybe thousands in some. And you wonder what happened with all of these aldermen beating their chests this whole time as they saw their communities disintegrate. They didn’t do a damn thing.”