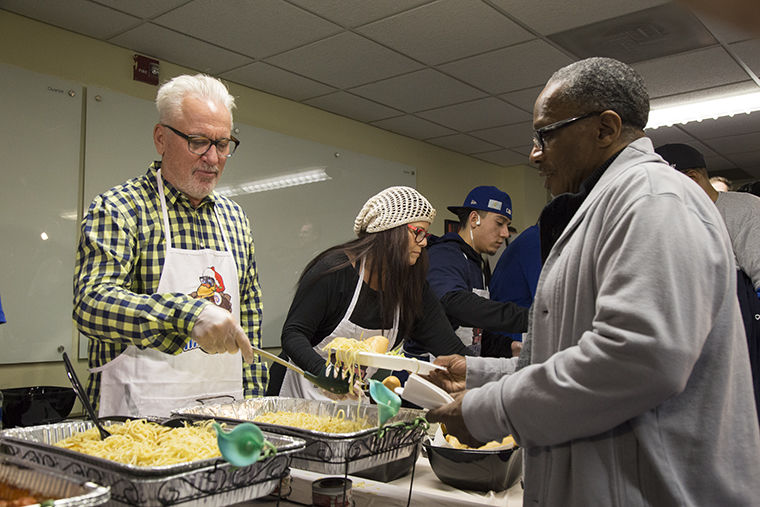 From the diamond to the kitchen, Cubs manager Joe Maddon served food as part of his annual Thanksmas event Jan. 17.

Maddon with other members of the Cubs organization, including Rick Sutcliffe and Clark the Cub, served food to attendees at St. Leonard’s Ministries, 2120 W. Warren Blvd.

When Maddon worked for the then-California Angels he would ride his bike along Huntington, Newport and Sunset Beach and would see people in need.

“It bothered me a lot,” Maddon said. “It should bother everyone a lot.”

Maddon called the event Thanksmas to show there is a need every day of the year to give back, and not just around the holidays.

Former Cubs pitcher Sutcliffe orginally planned to fly to Chicago Jan. 18 for the Cubs Convention, but flew in early for the event.

“Anything involving Joe Maddon, I’m always available [for],” Sutcliffe said. “It’s an opportunity for me to meet some great people—put a smile on their faces. If some of these people can flash back to the mid-’80s, early ‘90s and remember me on the mound, it is all worthwhile.”

The residents of St. Leonard’s are a special demographic, according to Katie Gonzalez, individual giving manager at St. Leonard’s Ministries. They consist of formerly incarcerated and homeless people, which is an overlooked and marginalized segment of Chicago’s population.

Citypak bags can stand on their own and have pouches for the users to store personal documents, water bottles and a poncho that can be worn over the backpack, according to Trudy Swanson, whose husband, Ron Kaplan, created Citypak.

Swanson said the idea for Citypak came when Kaplan saw people walking in the streets with ripped plastic bags.

Citypak also handed out socks, and Swanson said it is not unusual for the organization to hand out extra basic necessities along with the bags.

The event started in 2007 and has taken place in Tampa Bay and Hazleton, Pennsylvania.

“We have many residents at the shelter who are huge Cubs fans,” Gonzalez said. “People have been excited for weeks about this.”