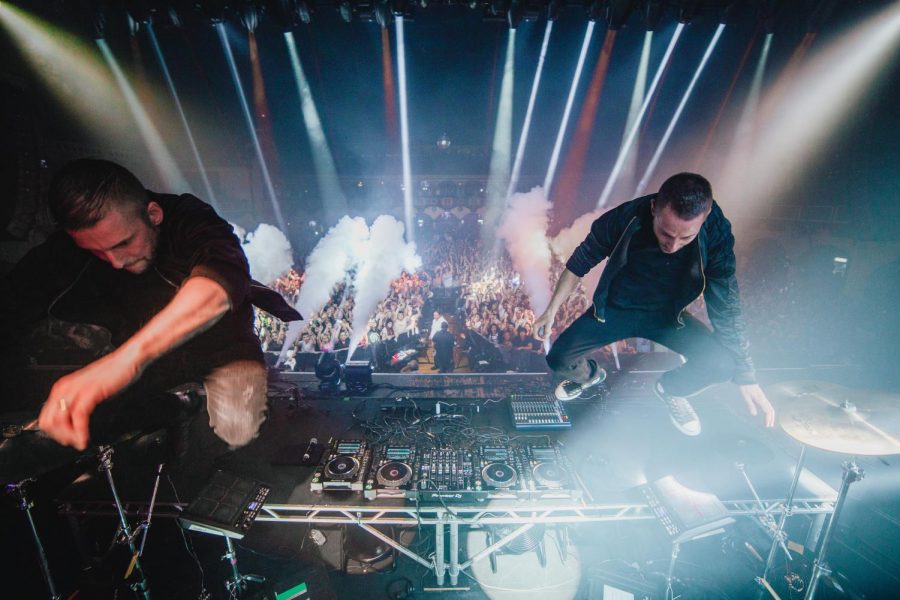 One musical theme moves through most—if not all—EDM music. It’s the build-up: the way each song heightens tension and excitement and transforms a swaying crowd into a jumping, raucous one.

Then, just as swarms of moshing fans are about to lose their minds, EDM artists learn how to pull back at just the right moment and leave fans on the precipice of sonic bliss—only to return with the drop, even more intense and satisfying than what came before.

When EDM duo Galantis performed at Aragon Ballroom, 1106 W. Lawrence Ave., Nov. 17, the show’s entire structure from its openers and on was a build.

The build came courtesy of the two openers that preceded Galantis. The first, a DJ by the stage name CID, was underwhelming, and the second, the EDM duo The Him, was slightly more impressive, steadily filling the room with energy.

By the time Christian Karlsson and Linus Eklöw, the two men who make up Galantis, even came onstage, that energy was on the precipice of its peak. The Aragon Ballroom’s spacious lower level filled to capacity, the sold-out crowd having arrived for the final moments of the concert’s build-up. The distant sound of canned bird calls filled the venue, not only a gentle introduction to the way the headliners would thematically guide fans through their recent album, The Aviary, but also a subtle step back after the build-up to leave people dangling in anticipation.

Galantis hopped behind the duo’selevated DJ booth—a large drum set behind them with atall pair of cymbals next to each of them—and hollered to a crowd of screaming EDM enthusiasts. Not to disappoint, as the first few notes of “The Hunter” reverberated throughout the Aragon, the duoturned to play the comically large drum set while a brilliantly designed light display blinded concertgoers, who were also being inundated with the dynamic, masterful and, of course, thematic graphics displayed behind Galantis.

During “Hunter,” for example, live video of the duo was transposed over a digitally rendered forest, placing them in the thick of a hunt.

Throughout their two-hour set, Karlsson and Eklöw didn’t fail to milk every moment of their drop. They continued with thematic graphics, such as a bird cage—another pointed reference to The Aviary—and exciting light design that mirrored and stoked the crowd’s enthusiasm. When the lights alternated between flashing toward the right and left sides of the stage, the audience took the hint and swayed their arms in unison.

Known for its up beat sound and sampling of Motown-esque beats, Galantis stayed on brand by delivering a remix of Whitney Houston’s 1987 hit “I Wanna Dance With Somebody (Who Loves Me)” as well as fan favorites like “Love On Me,” “Girls On Boys,” “Peanut Butter Jelly” and, as their encore, “Runaway (U & I).”

When the concert came to an end, a specific kind of energy replaced the pervasive joy that had spread from person to person, as if through bumped shoulders and mosh pits. After the lights and graphics faded, and Galantis thanked Chicago and Seafox Nation—the nickname for their fanbase—people started filtering out, but the remnants of confetti stuck to shoe soles and jackets without being brushed away, and smiles lingered on lips.

Without the lights and music, the bubble of joy that had consumed the audience for four hours might have dissipated, but a quiet, happy nostalgia had overtaken them. When something has been built up, after all, it’s hard to admit when the drop is over.