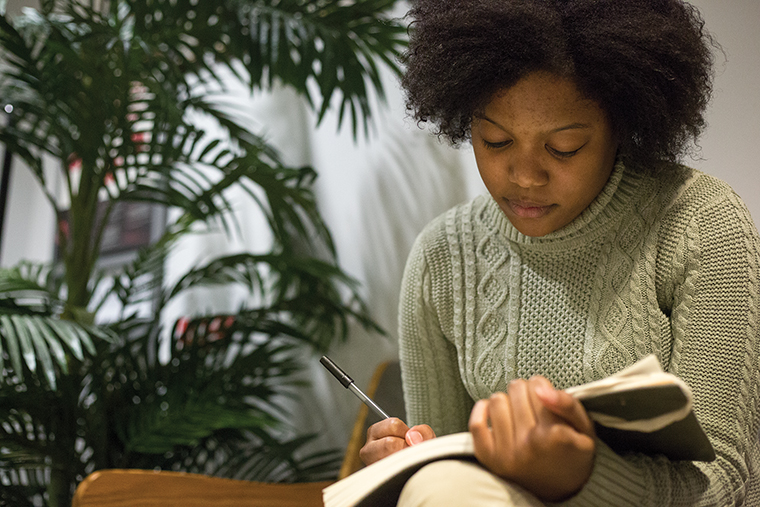 Ehi Ike, who is a freshman fiction writing major, has written and published two novels, each more than 200 pages, about a young girl’s kidnapping.

Most students grouse about writing a three-page paper, but Ehi Ike, a freshman fiction writing major, complains when she isn’t allowed to write more. When she was 13, Ike completed an outline for her first novel, “Taken Away,” about a 14-year-old girl from a low-income family who is violently taken from her home because her parents make less than $50,000 per year. By 14, Ike had her book published and on the shelves. “Taken Away” sells for $11.69 on Amazon.

Ike said she has been her own motivator since the sixth grade, when she first began the novel, although she credits her elementary school for expanding her imagination and critiquing her writing.

At 18, Ike published the sequel, “Hidden,” about the kidnapped teen’s rescue and fight for safety and government reform.

Now, Ike spends her time focusing on her outline for her third novel while holding book signings for her previous two.

The Chronicle spoke to Ike about the struggles of publishing, coming up with story ideas and achieving her life’s dream at an early age.

THE CHRONICLE: Who encouraged you to write?

EHI IKE: A lot of it was me. I was always writing and the elementary school I went to had an emphasis on writing and reading as well. My third grade teacher made us read a lot of books in her class, and my fourth and fifth grade teachers made us write a lot of stories. Those were things we would do three times a week or every day.

CC: How did you get the idea to write a violent novel like “Taken Away”?

EI: I don’t feel like I wrote stories that were like that. I used to love reading the Harry Potter series, so a lot of the time I would just write for fantasy. One day in class there was a history lesson, and we were discussing the Trail of Tears. The teacher asked us what we would do if we were taken away from our home, so I immediately started coming up with ideas. I guess I was just visualizing like a little girl would and having the main character and her friends having to escape something. I thought about it more and [it] developed into a story.

CC: How difficult was it to get your first book published?

EI: Most publishing companies don’t look at you unless you’re [with] a literary agent, and the publishing company I’m with, Tate Publishing, accepts manuscripts, so I just sent in a manuscript and then six to eight weeks later they responded back. For me it was just luck, to be honest. But to become published in a larger publishing company, it is much harder. As a 13-year-old, I was just looking for someone to publish my book.

CC: What made you write a sequel?

EI: I always knew that I was going to write a sequel. At first I thought it would be a trilogy, but the second book ended the story. I wanted to write a series because books that I read at the time were series, and those were the books that I enjoyed reading the most.

CC: What is the hardest part about writing a book?

EI: Honestly, it was not hard at all and I think it was just because of my age and the free time I had. I was very energetic and passionate at 13, but the sequel was definitely harder [because of] my schoolwork with writing and trying to still be social.

CC: What are you working on now?

EI: I don’t read series [of books] at all now so I’m just working on a novel. I’m not that in depth with it yet but I’m working on it in one of my classes. I’m still coming [up] with the characters and how I want it to be structured.