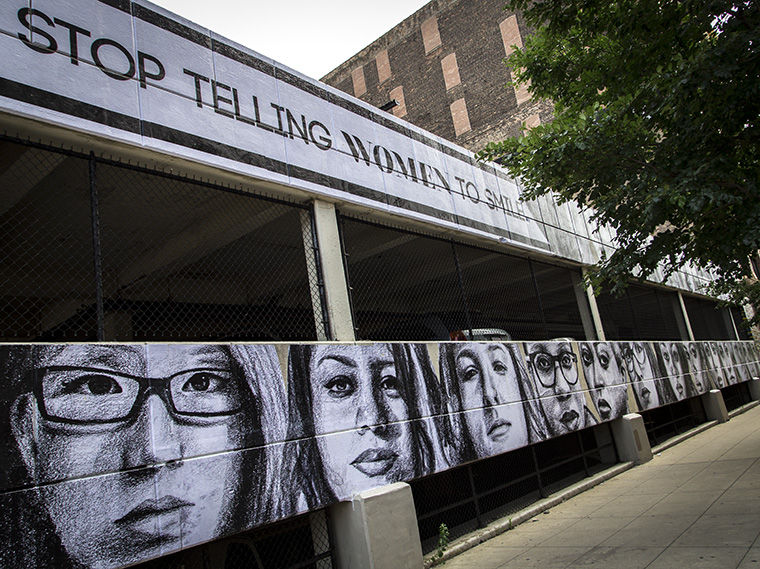 Students will notice new color and vibrancy across campus, as several new murals now line Wabash Avenue between East Van Buren Street and Roosevelt Road. Various artists, including Columbia alumni, have worked throughout the summer to contribute to the spectacle.

Kelly described Wabash Avenue as the “spine” of Columbia, making it the perfect avenue to showcase artwork.

“We are the architects of [the Wabash Arts Corridor],” Kelly said. “We are the driving force.”

Kelly is also the chair of the WAC committee, composed of neighboring businesses, institutions and residents who work to bring new art and recognition to the corridor. Vertical Gallery, an urban contemporary gallery specializing in the blend of street and contemporary art in the Ukrainian Village neighborhood, and The Chicago Loop Alliance, an organization that introduces urban art experiences to the Loop, have partnered with the WAC to introduce several new artists to the corridor.

Patrick Hull, owner and curator of Vertical Gallery, said at least four artists who will have work displayed in the gallery have connected with the WAC, including muralists Ben Flynn, known as Eine, from England, and Jacopo Ceccarelli, known as 2501, from Italy.

Eine’s mural is painted in his large signature style across the 230-foot wall behind the University Center at 525 S. State St., and 2501’s can be seen on the side of the Buckingham Student Living Apartments at 56 E. Van Buren St.

2501 visited Chicago from Florida in the first week of July to paint his mural. Despite the rainy weather he encountered, he completed the mural in just five days.

Describing his style as organic and philosophical, 2501 said he considers muralism a form of performance art. He uses brushes to cut-in areas of color  and small lines, working mostly with black and white, to focus on the shape and movement of the lines, he said. 2501 has used color in the past but has worked only with black and white for about six years.

Allowing the public to view artists at work on murals gives onlookers a sense of understanding and appreciation for the art, 2501 said.

Heidi Unkefer, a former graphic designer for The Chronicle, a 2013 illustration alumna and current graphic editor and photographer at The Onion, also contributed to the WAC. Unkefer won Columbia’s art alumni competition last year and painted her cartoon mural in early August on the south wall of the 623 S. Wabash Ave. Building.

Unkefer said she had only painted one mural before, so she was excited about the opportunity. It also influenced her perspective on muralism and being a full-time graphic artist.

“I didn’t actually consider this [as] something someone could do full-time, because being a full-time artist is kind of unheard of now,” Unkefer said. “But after going through all the steps, it is absolutely something I want to keep doing.”

Unkefer’s mural highlights her style of creativity through a playful world—one that transports viewers out of the City of Chicago and into her artistic vision, she said.

“It’s out there, it’s crazy, it’s cartoonish—exactly where I would want to be if I could pick and create my own little world,” Unkefer said.

Unkefer described painting the mural as one of her most challenging, yet rewarding experiences. She said it was both physically and mentally draining, but she learned about working independently and accounting for unexpected circumstances, such as weather, managing the forklift and working with the actual wall size.

Neysa Page-Lieberman, director of the Department of Exhibition & Performance and Student Spaces at Columbia, worked with Unkefer to organize the project and provide materials and assistance. After Unkefer finished the mural, Page-Lieberman said she was “in a state of disbelief” at the final product.

Unkefer and Hull said the WAC highlights the way the public’s perception of street art is changing. The negative connotation affiliated with street art and graffiti is fading, and artistry in the practice is gaining more support and recognition.

“[Street art] has grown to be widely accepted and is working toward the realm of fine art,” Unkefer said. “It is accessible and out there for everyone to see.”

She also said the gender gap between male and female street artists is decreasing, though there are more male than female artists currently participating in the WAC.

Tatyana Fazlalizadeh, another female street artist who contributed to the WAC, visited Chicago from New York City in early September to create the large mural depicting female faces, “Stop Telling Women to Smile,” located on the wall of a parking garage at 8th Street and Wabash Avenue, one block south of Papermaker’s Garden across the street. Fazlalizadeh said the mural was inspired by her experiences being harassed on the street. She has noticed it more since her move to NYC from Phillidelphia.

“It’s something that is part of my everyday life,” Fazlalizadeh said.

She said she wanted to do a project that would address the aggressive sexualization and catcalling of women. The mural is composed of images of many  women she photographed, illustrated and wheat pasted—a liquid adhesive made from flour and water—onto the wall.

Page-Lieberman, who helped develop Fazlalizadeh’s project, said she was inspired to bring Fazlalizadeh’s work to the WAC because of its strong message.

She also said Fazlalizadeh met with female students from Columbia to discuss their experiences with being harassed for her mural. She picked two students—Victoria Street, a junior journalism major, and D’Zari Bolden, a junior music major—and featured them in her mural, along with women who participated in the project.

Fazlalizadeh said she hopes the mural will spark a conversation about how women are treated in public and give women in college, the community and the greater Chicago area a sense of empowerment.

“As an artist, it’s really important to have strong images of women’s faces,” Fazlalizadeh said. “[It’s important to] listen to their stories and give credit to what they go through.”

“We have the potential to create a unique, urban creative campus like no other,” Kelly said. “There is a creative pulse and buzz that is palpable.”

Kelly wants students to “own the street.” He also said at least 10 new works will be added this year—five of which have already been completed, with at least four set for completion during the Fall 2015 Semester.

Other artists contributing to the WAC include KASHINK, a street artist from Paris who could start as early as next week, Don’t Fret-, another Columbia alumnus, and Chicago photographer Daryll Schiff.

The annual WAC Crawl, a day of art and music that takes place in the South Loop every year, is set for Oct. 23 and will include a self-guided walk of the new murals,  allowing the entire community  to take in all the new WAC color.