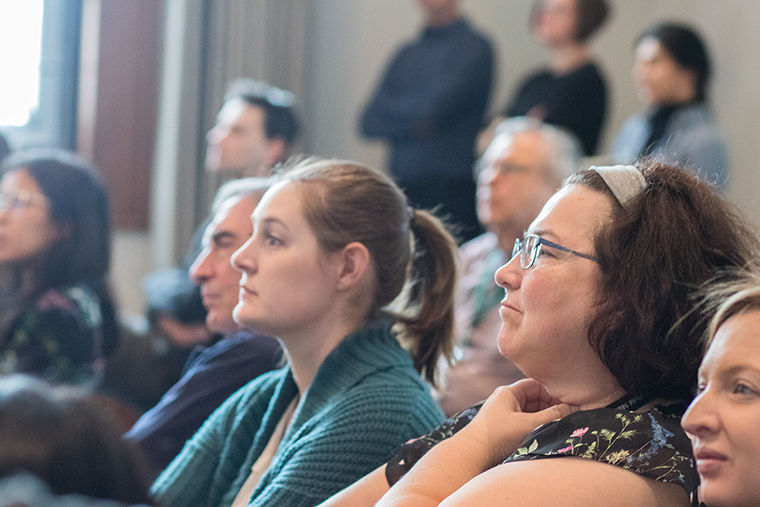 Comic book fans were treated to Emily Decker's lecture about the history of female representation in American comic books March 5 at The Field Museum.

The comic book industry has made some significant progress with better female representation of characters and creators, but there is still room for improvement, said Emily Decker, executive assistant to the vice president of institutional advancement at The Field Museum.

At a March 5 lecture at The Field Museum, 1400 S. Lake Shore Drive, Decker discussed the history of female comic book characters from 1941’s Wonder Woman to 2013’s Kamala Khan, the new Ms. Marvel, as well as their female creators.

In a presentation titled “Unmasking the Myth of Superwoman,” Decker described women in modern comic books as a second-wave feminist movement.

This has allowed women to take part in the fantastic medium that society has historically deemed most suitable for boys, Decker said.

“Comics are such a good outlet and source of entertainment because you don’t need that movie,” said Decker, who is also a former librarian at Marvel Comics. “Sure, it’s a storyboard on some level and your mind is thinking that way, but there’s [more] creative stuff [in comics].”

Since the Golden Age of comics in the 1930s–1950s, women have struggled to gain representation, Decker said. While there was a massive influx of female creators during WWII, thanks to the military draft, she said it did not last because of child psychologist Fredric Wertham’s 1954 book “Seduction of the Innocent,” which claimed that children who read comic books become delinquents.

This led to the Comics Code Authority, which was composed of parents, educators and clergymen who  regulated comic books’ context, to make sure the material was appropriate. This caused many female characters to disappear because they were deemed too sexy, Decker said.

Even in the new millennium, women creators still struggle to get work in the industry. In 2011, DC Comics rebooted all of its titles. In 2010, 12 percent of its creators were female; however, after the relaunch, female creators were only 1 percent of the total, according to Decker.

It has gotten better, Decker said, but female creators are at about 15–20 percent in both DC Comics and Marvel Comics.

“You have something that will change with culture, so I hope we will get the heroes we not only deserve but also need,” Decker said.

Aquila Wilks, who works in the Collections Department at The Field Museum, grew up reading Japanese manga and is an anime fan but has recently started reading comic books, such as “Witchblade” and “Monstress,” which Wilks said she wanted to discuss more.

However, Wilks said she did watch the “X-Men” animated series during the ‘90s and was blown away by the female characters.

“That encouraged me. That blew my mind,” Wilks said. “I’m used to seeing what’s called distaff counterparts like Superman and Supergirl.”

Katlyn Hemmingsen, a traveling exhibition manager at The Field Museum, said despite not being a comic book reader herself, she is proud to see more female representation in comic books. With more superheroines in comics, the companies are tapping into another market, both for readers and potential creators, she added.

The mentality that says comic books are only for boys stems throughout society. Decker picked up her first comic when she was 5 years old, but it was immediately slapped out of her hand by a “horrible boy” who said, “Girl’s aren’t meant to read comics,” she told The Chronicle.