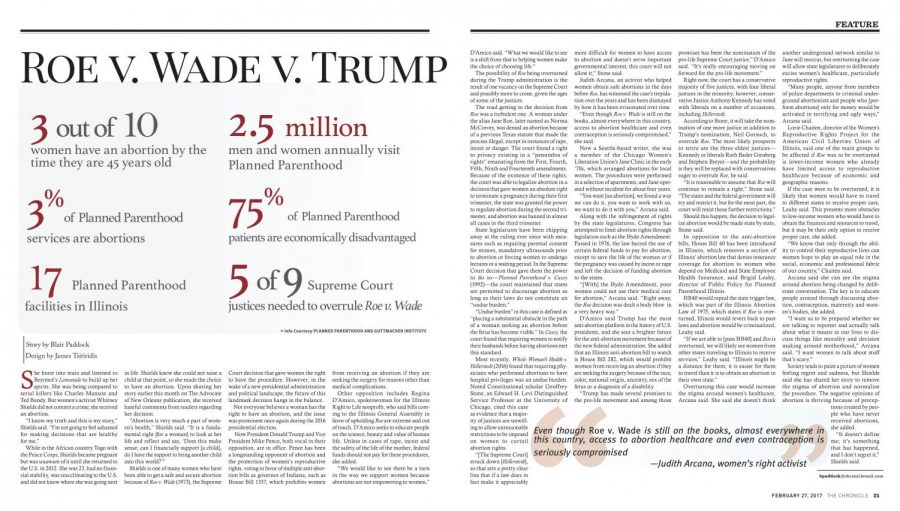 She burst into tears and listened to Beyoncé’s Lemonade to build up her spirits. She was being compared to serial killers like Charles Manson and Ted Bundy. But women’s activist Whitney Shields did not commit a crime; she received an abortion.

“I know my truth and this is my story,” Shields said. “I’m not going to feel ashamed for making decisions that are healthy for me.”

While in the African country Togo with the Peace Corps, Shields became pregnant but was unaware of it until she returned to the U.S. in 2012. She was 23, had no financial stability, was reacclimating to the U.S. and did not know where she was going next in life. Shields knew she could not raise a child at that point, so she made the choice to have an abortion. Upon sharing her story earlier this month on The Advocate of New Orleans publication, she received hateful comments from readers regarding her decision.

“Abortion is very much a part of women’s health,” Shields said. “It is a fundamental right [for a woman] to look at her life and reflect and say, ‘Does this make sense, can I financially support [a child], do I have the support to bring another child into this world?’”

Shields is one of many women who have been able to get a safe and secure abortion because of Roe v. Wade (1973), the Supreme Court decision that gave women the right to have the procedure. However, in the wake of a new presidential administration and political landscape, the future of this landmark decision hangs in the balance.

Not everyone believes a woman has the right to have an abortion, and the issue was prominent once again during the 2016 presidential election.

Now President Donald Trump and Vice President Mike Pence, both vocal in their opposition, are in office. Pence has been a longstanding opponent of abortion and the protection of women’s reproductive rights, voting in favor of multiple anti-abortion bills as governor of Indiana, such as House Bill 1337, which prohibits women from receiving an abortion if they are seeking the surgery for reasons other than medical complications.

Other opposition includes Regina D’Amico, spokeswoman for the Illinois Right to Life nonprofit, who said bills coming to the Illinois General Assembly in favor of upholding Roe are extreme and out of touch. D’Amico seeks to educate people on the science, beauty and value of human life. Unless in cases of rape, incest and the safety of the life of the mother, federal funds should not pay for these procedures, she added.

The possibility of Roe being overturned during the Trump administration is the result of one vacancy on the Supreme Court and possibly more to come, given the ages of some of the justices.

The road getting to the decision from Roe was a turbulent one. A woman under the alias Jane Roe, later named as Norma McCorvey, was denied an abortion because of a previous Texas statute that made the process illegal, except in instances of rape, incest or danger. The court found a right to privacy existing in a “penumbra of rights” emanating from the First, Fourth, Fifth, Ninth and Fourteenth amendments. Because of the existence of these rights, the court was able to legalize abortion in a decision that gave women an absolute right to terminate a pregnancy during their first trimester, the state was granted the power to regulate abortion during the second trimester, and abortion was banned in almost all cases in the third trimester.

State legislatures have been chipping away at the ruling ever since with measures such as requiring parental consent for minors, mandatory ultrasounds prior to abortion or forcing women to undergo lectures or a waiting period. In the Supreme Court decision that gave them the power to do so—Planned Parenthood v. Casey (1992)—the court maintained that states are permitted to discourage abortion as long as their laws do not constitute an “undue burden.”

“Undue burden” in this case is defined as “placing a substantial obstacle in the path of a woman seeking an abortion before the fetus has become viable.” In Casey, the court found that requiring women to notify their husbands before having abortions met this standard.

Most recently, Whole Woman’s Health v. Hellerstedt (2016) found that requiring physicians who performed abortions to have hospital privileges was an undue burden. Noted Constitutional scholar Geoffrey Stone, an Edward H. Levi Distinguished Service Professor at the University of Chicago, cited this case as evidence that a majority of justices are unwilling to allow unreasonable restrictions to be imposed on women to curtail abortion rights.

“[The Supreme Court] struck down [Hellerstedt], so that sets a pretty clear line that if a law does in fact make it appreciably more difficult for women to have access to abortion and doesn’t serve important governmental interest, this court will not allow it,” Stone said.

Judith Arcana, an activist who helped women obtain safe abortions in the days before Roe, has witnessed the case’s trepidation over the years and has been dismayed by how it has been eviscerated over time.

“Even though Roe v. Wade is still on the books, almost everywhere in this country, access to abortion healthcare and even contraception is seriously compromised,” she said.

Now a Seattle-based writer, she was a member of the Chicago Women’s Liberation Union’s Jane Clinic in the early ‘70s, which arranged abortions for local women. The procedures were performed in a selection of apartments, and Jane operated without incident for about four years.

“You want [an abortion], we found a way we can do it, you want to work with us, we want to do it with you,” Arcana said.

Along with the infringement of rights by the state legislatures, Congress has attempted to limit abortion rights through legislation such as the Hyde Amendment. Passed in 1976, the law barred the use of certain federal funds to pay for abortion, except to save the life of the woman or if the pregnancy was caused by incest or rape and left the decision of funding abortion to the states.

“[With] the Hyde Amendment, poor women could not use their medical care for abortion,” Arcana said. “Right away, the Roe decision was dealt a body blow  in a very heavy way.”

D’Amico said Trump has the most anti-abortion platform in the history of U.S. presidents, and she sees a brighter future for the anti-abortion movement because of the new federal administration. She added that an Illinois anti-abortion bill to watch is House Bill 282, which would prohibit women from receiving an abortion if they are seeking the surgery because of the race, color, national origin, ancestry, sex of the fetus or a diagnosis of a disability.

Right now, the court has a conservative majority of five justices, with four liberal justices in the minority; however, conservative Justice Anthony Kennedy has voted with liberals on a number of occasions, including Hellerstedt.

According to Stone, it will take the nomination of one more justice in addition to Trump’s nomination, Neil Gorsuch, to overrule Roe. The most likely prospects to retire are the three eldest justices—Kennedy or liberals Ruth Bader Ginsberg and Stephen Breyer—and the probability is they will be replaced with conservatives eager to overrule Roe, he said.

“It is reasonable to assume that Roe will continue to remain a right,” Stone said. “The states and the federal government will try and restrict it, but for the most part, the court will resist those further restrictions.”

Should this happen, the decision to legalize abortion would be made state by state, Stone said.

In opposition to the anti-abortion bills, House Bill 40 has been introduced in Illinois, which removes a section of Illinois’ abortion law that denies insurance coverage for abortion to women who depend on Medicaid and State Employee Health Insurance, said Brigid Leahy, director of Public Policy for Planned Parenthood Illinois.

HB40 would repeal the state trigger law, which was part of the Illinois Abortion Law of 1975, which states if Roe is overturned, Illinois would revert back to past laws and abortion would be criminalized, Leahy said.

“If we are able to [pass HB40] and Roe is overturned, we will likely see women from other states traveling to Illinois to receive services,” Leahy said. “Illinois might be a distance for them; it is easier for them to travel than it is to obtain an abortion in their own state.”

“Many people, anyone from members of police departments to criminal underground abortionists and people who [perform abortions] only for money would be activated in terrifying and ugly ways,” Arcana said.

Lorie Chaiten, director of the Women’s Reproductive Rights Project for the American Civil Liberties Union of Illinois, said one of the main groups to be affected if Roe was to be overturned is lower-income women who already have limited access to reproductive healthcare because of economic and geographic reasons.

“We know that only through the ability to control their reproductive lives can women hope to play an equal role in the social, economic and professional fabric of our country,” Chaiten said.

Arcana said she can see the stigma around abortion being changed by deliberate conversation. The key is to educate people around through discussing abortion, contraception, maternity and women’s bodies, she added.

“I want us to be prepared whether we are talking to reporter and actually talk about what it means in our lives to discuss things like morality and decision making around motherhood,” Arcana said. “I want women to talk about stuff that’s scary.”

Society tends to paint a picture of women feeling regret and sadness, but Shields said she has shared her story to remove the stigma of abortion and normalize the procedure. The negative opinions of abortion is thriving because of perceptions created by people who have never received abortions, she added.

“It doesn’t define me; it’s something that has happened, and I don’t regret it,” Shields said.