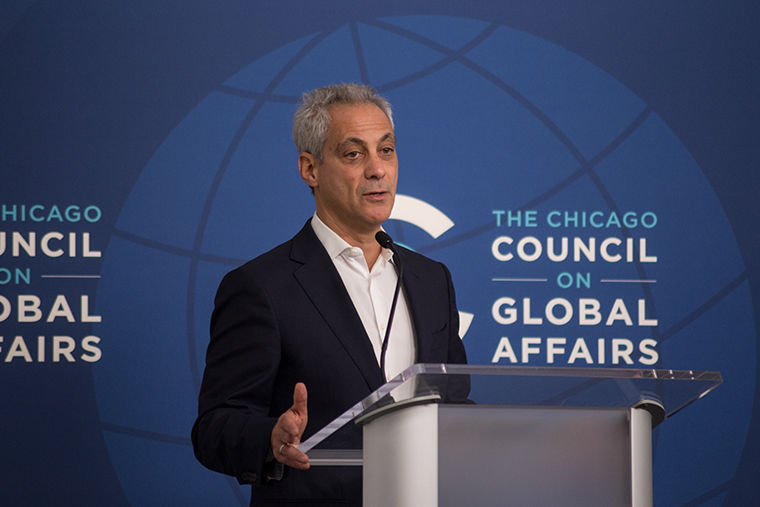 The summit concluded with signing the Chicago Climate Charter, which was a pledge to achieve those standards. Although several U.S. governors and mayors—including Mayor Rahm Emanuel—already signed executive orders to adopt the accord guidelines after President Donald Trump withdrew the U.S. from the Paris climate agreement June 1, Emanuel supported the summit and charter.

When leadership at the federal level fails to protect the nation’s well-being, Emanuel said it is incumbent that cities have the economic and educational resources to fill that void. Emanuel pointed to the unseasonably warm December day—temperatures hit 64 degrees—as a sign of urgency.

“If you don’t believe there’s climate change, I was running [Dec. 3] on Lake Michigan on the lakefront path. It was 62 [degrees, and I] was in shorts,” Emanuel said. “Tomorrow, it’s dropping 30 degrees. It’s happening, and the question is what are we going to do about it. Not whether it’s happening, but what we collectively do to take care of it.”

Local action is where the solutions are, and it is the obligation of local officials to enforce them, said Mayor Gregor Robertson of Vancouver, British Columbia.

“We can’t be at odds with federal governments in terms of phasing out fossil fuels as soon as humanly possible to protect our planet,” Robertson said. “We’ve got to bind together to deliver on the solutions and actions that we need, and to call the BS on other governments when they’re not taking action or in denial.”

The summit and the charter demonstrates that local and state governments realized the urgency to address climate change and have stepped up to leadership roles, said Bryan Tillman, project manager of 360 Energy Group, a Chicago-based energy consulting firm that provides energy solutions to public and private building owners and government agencies.

Tillman said too often there is a misconception that doing something good for the environment is bad for the economy. New technological innovations in energy performance and storage and electric vehicles provide new economic opportunities and can act as incentives for local governments to enforce green energy policies, he added.

“Don’t let anyone convince you that [cities going green] costs money,” Emanuel said. “We as a city save $25 million dollars a year on energy costs because of our retrofitting plan. So you could not only grow jobs, be healthier, but also save money.”

Despite the lack of financial assistance from the federal government, Tillman said state and local governments can still meet the carbon emission reduction standards established in the Paris climate agreement. Chicago, and other cities alike, should draw from their educational institutions to find those who are passionate about the topic, Tillman added.

While in business school, Tillman said he encountered other students who were also worried about the ramifications of climate change and joined groups to learn more about the topic. Those individuals went on to be the “change from within” and pushed for sustainability initiatives in their fields, he added and encouraged students to follow that example.

Many universities and colleges have student-led sustainability groups, Tillman said. Those are important to get involved in, and students should motivate their institutions to apply energy efficiency initiatives, such as LED lights, he noted.

“Change organizations, whatever business you go into,” Tillman said. “Start a sustainability group there that looks to enhance recycling or encourage more energy efficient processes.”