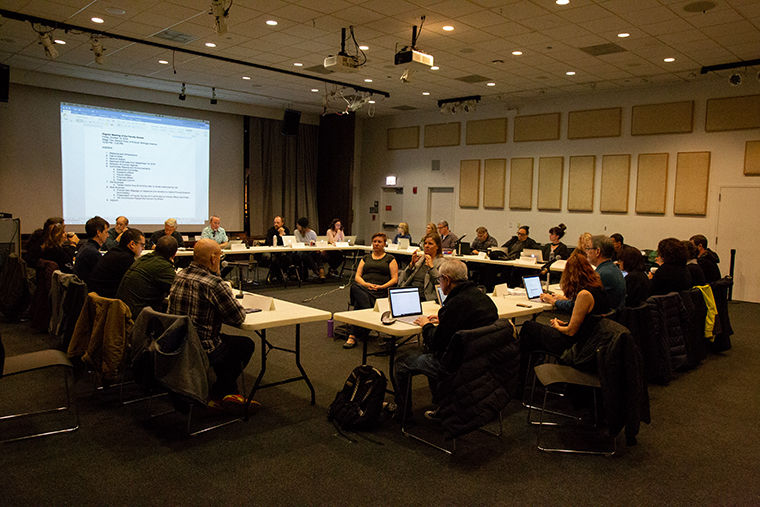 A meeting of the Faculty Senate held at Stage Two, 618 Michigan Ave., Oct. 12 centered around faculty dissatisfaction with compensation and finances at the college.

Columbia faculty can expect more cuts to compensation and benefits, including an impending cut of total compensation of about $1,000 this year for family health care benefits.

Columbia employees had already been informed by mail of a new schedule of benefits but the increase in costs for families was not highlighted and faculty had told their senators that they didn’t realize just how much more they would have to pay for health care.

The news was not received well by senators who pointed out that they haven’t received a cost of living adjustment in 10 or 15 years.

Associate Professor in the Science and Mathematics Department and Vice President of Faculty Senate Keith Kostecka called for an immediate and dramatic change in faculty compensation, including an across the board cost of living increase.

“A good number of people feel full-time faculty need to be better compensated for these salary cuts that have been occurring,” Kostecka said. “We need action as soon as possible.”

Among the proposed changes is a phased retirement plan, a task force will convene Oct. 23 to discuss the issue with the goal of wrapping up discussions by December and having possible administrative action by the end of the 2018-2019 academic year, Kostecka said.

Faculty survey results for 2018 showed faculty were very dissatisfied with faculty financial opportunities and salaries at the college. Chair of the Faculty Affairs Committee and Associate Professor in the Interactive Arts and Media Department Dave Gerding presented the survey results during the meeting.

“We shouldn’t be treating this as a chess piece, and that’s why we’re sober about the analytics,” Gerding said.

“Moving forward in this time of austerity, we were trying to think, how can we extend the benefits of the [diversity] training to students?” Wilson said.

In the future, DEI will focus on representation, not only in who is hired at the college, but also in the research faculty members are conducting, Monroe said.

Andrews also brought to senators’ attention President and CEO Kwang-WuKim’s postponement of his decision whether or not to discontinue the creative arts therapies and early childhood education programs.

“This process itself has nearly fatally stalled program enrollment, perhaps making the recommendation for discontinuance a self-fulfilling prophecy,” Andrews said. “Neither program was particularly pleased with the postponed decision. They’ve already weathered several semesters of uncertainty.”