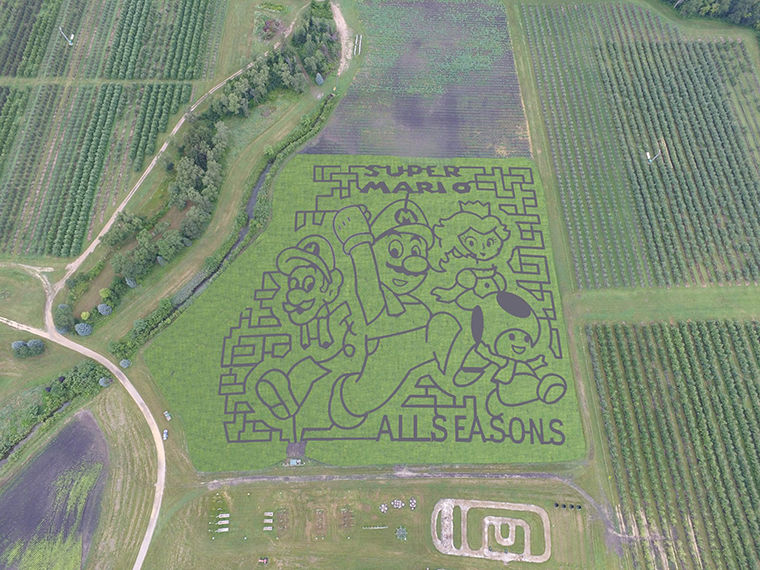 All Seasons Orchard made a nostalgic “Super Mario” maze for this fall season. Some of the orchard’s previous designs include “Minions” and “Scooby-Doo.”

Vying for consumer attention, Chicagoland farms and orchards are getting more elaborate in their corn maze designs, drawing on pop culture with sports, film and even video game references to draw in the masses.

Richardson Adventure Farm—909 English Prairie Road, Spring Grove, Illinois, home to what the farm calls the world’s largest corn maze—constructed a 28-acre illustration celebrating the Cubs’ 2016 World Series win, with the Wrigley Field marquee and the late Harry Caray shouting “Holy Cow!” while a pitcher and a batter square off in the bottom corners.

“In Chicagoland, we have hundreds and thousands of things that are trying to get people’s attention,” said George Richardson, co-owner of Richardson Adventure Farm. “By having something that’s large and makes a spectacular picture, it helps get noticed.”

Previous Richardson Adventure Farm mazes included everything from Star Trek to the Blackhawks. Richardson said the most challenging factor is not constructing the mazes but rather obtaining the rights to use famous logos.

“The most difficult part about that,” he explained, “is finding the right person who can get what you’re saying like, ‘Oh, well I guess maybe this would be good to have a Star Trek maze.’ When you find that person [and] explain what you’re doing, usually they’ll let us use the logos and images.”

Richardson Adventure Farm is not the only area farm to “Fly the W” this year. Siegel’s Cottonwood Farm, 17250 Weber Road, Lockport, Illinois, has a more compact 15-acre maze with the iconic W flag and Cubs logo. The Cubs marketing team even went to Siegel’s and made a brief Facebook video showcasing it.

Siegel’s mazes are planned up to a year in advance during winter brainstorming sessions, said Kaity Siegel, the farm’s general manager. Final designs are made in March and the maze is constructed throughout the summer, using atypical planting techniques and spray paint to mark off the twisting routes.

“[Customers] are looking for something more challenging and cool to go through,” Siegel said.

Richardson goes down a more exact path, hiring out a designer from MazePlay.com, a corn maze design firm. Cutters then use GPS after the design is mapped to carve out the swaths of paths in the vast cornfield with rototillers.

Despite the huge size, it is tough to get lost in Richardson’s mazes; there are no major dead ends, and there is a 50-foot observation tower with heightened bridges, so people can know where they are at all times, Richardson said.

Instead of making easier mazes, Siegel’s moved to making one larger—the Cubs labyrinth—and one smaller, one-acre maze. The small one takes 15–20 minutes to solve, while the large one can take 45 minutes or more.

While Cubs fans can indulge in nostalgia from the 2016 World Series, video game fans can have fun while getting lost in a 10-acre Super Mario-themed maze with three miles of paths at All Seasons Orchard, 14510 IL Route 176, Woodstock, Illinois.

In the Mario maze, the titular character is front and center in a jumping pose while Luigi, Toad and Princess Peach run off both sides. Luigi’s outline makes up a smaller, easier maze.

“We all grew up on Mario,” said Eddie Hong, All Seasons’ production manager. “My sister and [I] brainstorm ideas on what could be popular with people and what connects with them as well as us.”

With the release of the in-demand Super Nintendo Classic and Nintendo Entertainment System Classic consoles since 2016, Hong said it was a perfect time to have a Mario-themed maze.

Entrance to All Season’s Mario maze is included with the orchard’s “Barnyard Admission” cost, which is $10 Monday–Friday and $15 Saturday and Sunday. Seniors get in for $9 any day of the week.

“[Corn mazes are] something very unique that you can only really do in [fall],” Hong said. “It’s a limited time period. People keep that in mind, and once that time arrives, people get excited about it.”