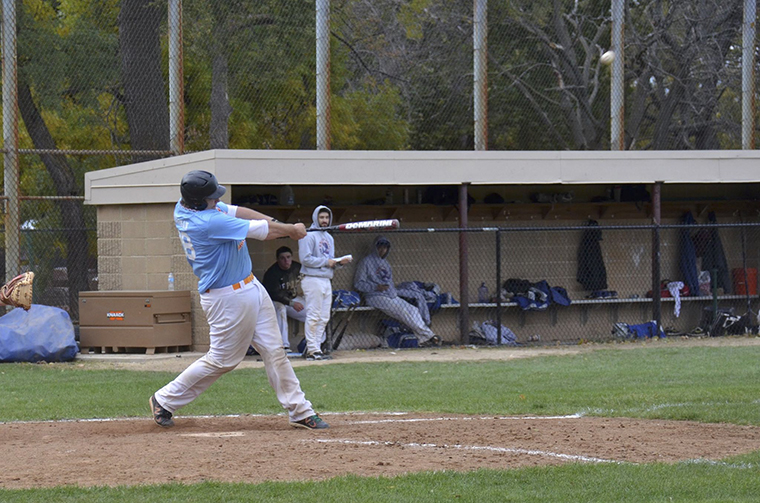 Performing on “Saturday Night Live” has been a long-time dream for Corbin Merriman, and it is one of the reasons he chose to attend Columbia, but his decision ultimately came down to the college having a baseball team.

Merriman, a sophomore theater major from Dalton, Ohio, came to Columbia because of the college’s comedy writing and performance program. Merriman has been playing baseball since he began t-ball at 4 years old. He is currently the starting catcher and one of the co-captains of the Columbia Renegades baseball team.

The Chronicle spoke to Merriman about growing up in Ohio, moving to Chicago, studying comedy and playing baseball.

THE CHRONICLE: Where did you grow up?

CORBIN MERRIMAN: I grew up in a very small town called Dalton, Ohio, and the town had less than 1,500 people. The thing about my town is, usually, once you’re in high school, you’ve peaked and then you went out and got a blue-collar job and made $30,000 a year and you lived vicariously through your children and had accomplished everything you could. I didn’t want to be one of those people that stuck around and just lived the American life with the white picket fence. I wanted to go out and see if I could make something of myself, have some sort of an impact on people’s lives.

CC: How did you adapt to Chicago after growing up in Dalton?

CM: Going from Chicago to Dalton is night and day…. Everything is much faster here—people aren’t so simple. People back home wake up, [have] breakfast, go to their job, come home, feed the kids, go to bed, and then you just kind of do that every day. Here, people are always looking for the nightlife, and even the day life is incredibly fast-paced and everyone is doing something.

CC: Why did you start playing baseball?

CM: I probably started because my parents put me in it, but I don’t blame them. I can remember when I was little, I’d always want to watch the Cleveland Indians play. I was dressed in Cleveland Indians gear in my baby pictures.

CC: Who inspired you to keep playing?

CM: I don’t know if I had a specific person I played for … I wanted to be the best—always. I always wanted to be the kid that hit the most home runs, the kid that threw the hardest, threw the farthest, ran the fastest. Growing up, I definitely played out of sheer selfishness … but it became … more meaningful to other people when they saw me play.

CC: What is your favorite baseball position to play?

CM: Catcher, definitely. I’m the captain of the team, at least on defense. I see everything that’s going on…. I tell [people] where to throw the ball. I run what happens. I like having that power. I like having the responsibility. Sometimes I mess up and it all goes to hell, but it comes with the job and there’s nothing I can do about it—I love catching.

CC: What is it like being a member of the Renegades?

CM: If I wasn’t on the Renegades, I would just be another college kid that sits in a dorm all day and watches Netflix until class. I’m glad there’s baseball here because it was kind of a big playmaker in me coming to [Columbia].

CC: If you had to choose between be- ing on ‘SNL’ and playing for the Cleveland Indians, which would you choose?

CM: I would play baseball. Baseball is just easier. Comedy is so hard. SNL is my dream job, but I’m still kind of lazy, so I’d probably just play baseball. It’s so much easier.