The Spectacle takes student films out of classroom 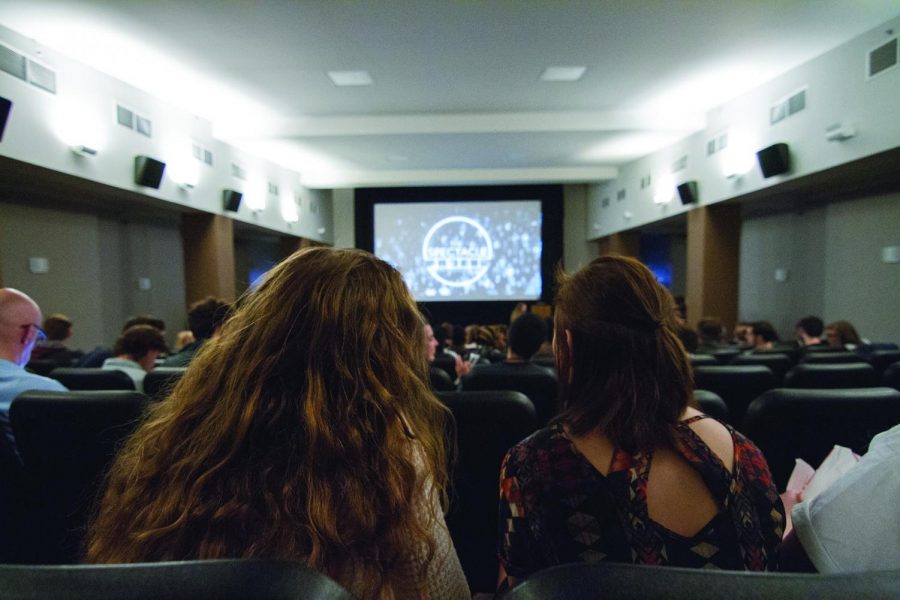 Students attend the first Spectacle event part of a series of screenings of student films, on Sept. 23 at the Conaway Center, 1104 S. Wabash Ave. The Spectacle aims to feature students’ work and help students to network with other filmmakers.

Students, filmmakers and fans packed Film Row Cinema at the Conaway Center, 1104 S. Wabash Ave., as The Spectacle, a screening series of short films made by Columbia students, kicked off its run on Sept. 23.

The Spectacle was created so film students could have a formal place to show their work. Founding students collaborated with Viva Doc, a student organization that creates nonfiction films.

Ali Hadley, a senior cinema art + science major and The Spectacle organizer, said the idea emerged because film students are active filmmakers but were only getting opportunities to show their work in class besides offering a showcase, The Spectacle is also an opportunity for networking, she said.

Although faculty members helped develop The Spectacle at the beginning, it has been predominantly student-run, Hadley said.

Although there have been smaller film screenings by the Experimental Film Society, Viva Doc and the Women + Film Club, The Spectacle [is intended] to help filmmakers gain a wider audience, she said.

“We want to celebrate our work that we’ve been doing, but we also want to include everyone,” Hadley said. “There’s no reason for us to not have a network.”

She said they hope to eventually raise funds and move screenings off campus, but the group wants students to show their work and watch other films.

“[The first event] is really just going to hopefully instigate communication and kickstart something in our little community, and then hopefully we’ll create some revenue for ourselves to build upon this little tiny empire,” Hadley said.

She said she hopes other students, faculty and community members become interested in attending The Spectacle because it is ideal exposure for their films.

Tina Roberts, a junior cinema art + science major and president of Viva Doc, said her club originally got involved with The Spectacle to help with logistics such as supplying popcorn and reserving Film Row Cinema. The club hosts workshops and events, and she said it hopes to help with The Spectacle in more ways than logistically in the future.

As a filmmaker herself, Roberts said she enjoyed seeing other students’ work outside of the classroom.

“I loved seeing what other students were doing and it really inspired me as I’m sure it did others,” Roberts said. “It made me want to go finish the film I’m working on so that I can show it at the next Spectacle. I think it’s super important just to inspire everyone and motivate networking.”

Hannah Welever, a 2014 cinema art + science and humanities, history & social sciences graduate, said although she graduated, she is still working with The Spectacle. Along with senior cinema arts + science major Bret Hamilton and Hadley, she is a part of The Spectacle’s organizers. After starting the Women + Film Club more than a year ago, she said she planned to host screenings that were on a larger scale and professional.

“We needed something to invite old and new faces because all the screenings that we had [previously] were very small and contained,” Welever said.

Students are passionate and excited to have resources and spaces to showcase their work like The Spectacle is offering, Welever said. She said the organization plans to have monthly events in different parts of Chicago. By having these screenings, they are motivating students to finish their work because they will have a place to show it, she added.

“The reason we plan these events is because they don’t exist,” Welever said. “We have enough initiative where we want to see that change. We’re constantly working on different things, and we’re constantly hearing about different projects, but what is the point if we’re never going to watch it? We need to be in control of when we’re going to see these things.”

The Spectacle is now accepting submissions at thespectaclechicago@gmail.com