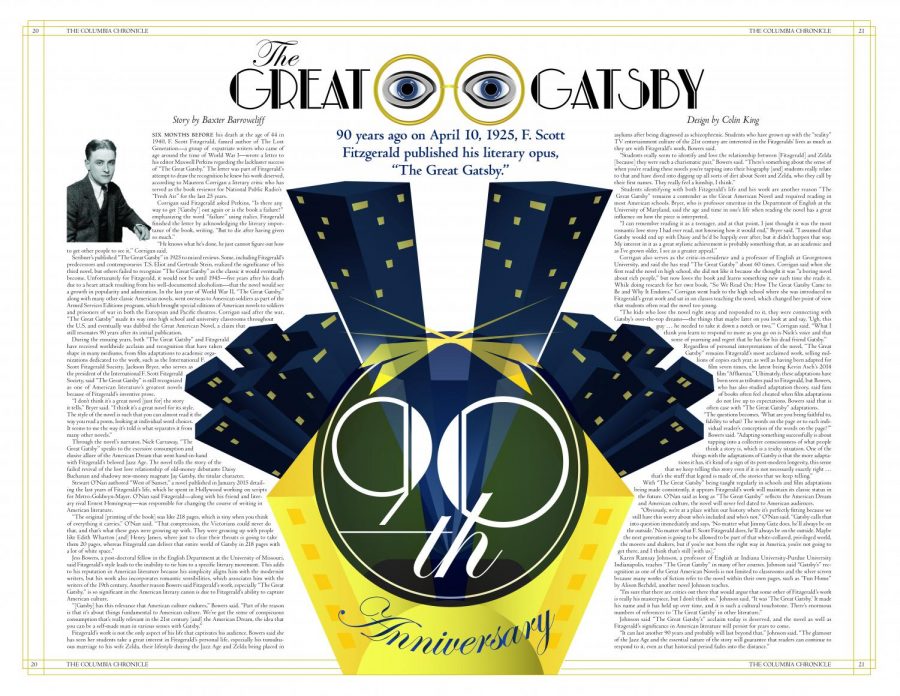 Six months before his death at the age of 44 in 1940, F. Scott Fitzgerald, famed author of The Lost Generation—a group of  expatriate writers who came of age around the time of World War I—wrote a letter to his editor Maxwell Perkins regarding the lackluster success of “The Great Gatsby.” The letter was part of Fitzgerald’s attempt to draw the recognition he knew his work deserved, according to Maureen Corrigan a literary critic who has served as the book reviewer for National Public Radio’s “Fresh Air” for the last 25 years.

Corrigan said Fitzgerald asked Perkins, “Is there any way to get [‘Gatsby’] out again or is the book a failure?” emphasizing the word “failure” using italics. Fitzgerald finished the letter by acknowledging the literary importance of the book, writing, “But to die after having given so much.”

“He knows what he’s done, he just cannot figure out how to get other people to see it,” Corrigan said.

Scribner’s published “The Great Gatsby” in 1925 to mixed reviews. Some, including Fitzgerald’s predecessors and contemporaries T.S. Eliot and Gertrude Stein, realized the significance of his third novel, but others failed to recognize “The Great Gatsby” as the classic it would eventually become. Unfortunately for Fitzgerald, it would not be until 1945—five years after his death due to a heart attack resulting from his well-documented alcoholism—that the novel would see a growth in popularity and admiration. In the last year of World War II, “The Great Gatsby,” along with many other classic American novels, went overseas to American soldiers as part of the Armed Services Editions program, which brought special editions of American novels to soldiers and prisoners of war in both the European and Pacific theatres. Corrigan said after the war, “The Great Gatsby” made its way into high school and university classrooms throughout the U.S. and eventually was dubbed the Great American Novel, a claim that still resonates 90 years after its initial publication.

During the ensuing years, both “The Great Gatsby” and Fitzgerald have received worldwide acclaim and recognition that have taken shape in many mediums, from film adaptations to academic organizations dedicated to the work, such as the International F. Scott Fitzgerald Society. Jackson Bryer, who serves as the president of the International F. Scott Fitzgerald Society, said “The Great Gatsby” is still recognized as one of American literature’s greatest novels because of Fitzgerald’s inventive prose.

Through the novel’s narrator, Nick Carraway, “The Great Gatsby” speaks to the excessive consumption and elusive allure of the American Dream that went hand-in-hand with Fitzgerald’s beloved Jazz Age. The novel tells the story of the failed revival of the lost love relationship of old-money debutante Daisy Buchanan and shadowy new-money magnate Jay Gatsby, the titular character.

Stewart O’Nan authored “West of Sunset,” a novel published in January 2015 detailing the last years of Fitzgerald’s life, which he spent in Hollywood working on scripts for Metro-Goldwyn-Mayer. O’Nan said Fitzgerald—along with his friend and literary rival Ernest Hemingway—was responsible for changing the course of writing in American literature.

“The original [printing of the book] was like 218 pages, which is tiny when you think of everything it carries,” O’Nan said. “That compression, the Victorians could never do that, and that’s what these guys were growing up with. They were growing up with people like Edith Wharton [and] Henry James, where just to clear their throats is going to take them 20 pages, whereas Fitzgerald can deliver that entire world of Gatsby in 218 pages with a lot of white space.”

Jess Bowers, a post-doctoral fellow in the English Department at the University of Missouri, said Fitzgerald’s style leads to the inability to tie him to a specific literary movement. This adds to his reputation in American literature because his simplicity aligns him with the modernist writers, but his work also incorporates romantic sensibilities, which associates him with the writers of the 19th century. Another reason Bowers said Fitzgerald’s work, especially “The Great Gatsby,” is so significant in the American literary canon is due to Fitzgerald’s ability to capture American culture.

“[Gatsby] has this relevance that American culture endures,” Bowers said. “Part of the reason is that it’s about things fundamental to American culture. We’ve got the sense of conspicuous consumption that’s really relevant in the 21st century [and] the American Dream, the idea that you can be a self-made man in various senses with Gatsby.”

Fitzgerald’s work is not the only aspect of his life that captivates his audience. Bowers said she has seen her students take a great interest in Fitzgerald’s personal life, especially his tumultuous marriage to his wife Zelda, their lifestyle during the Jazz Age and Zelda being placed in asylums after being diagnosed as schizophrenic. Students who have grown up with the “reality” TV entertainment culture of the 21st century are interested in the Fitzgeralds’ lives as much as they are with Fitzgerald’s work, Bowers said.

“Students really seem to identify and love the relationship between [Fitzgerald] and Zelda [because] they were such a charismatic pair,” Bowers said. “There’s something about the sense of when you’re reading these novels you’re tapping into their biography [and] students really relate to that and have dived into digging up all sorts of dirt about Scott and Zelda, who they call by their first names. They really feel a kinship, I think.”

Students identifying with both Fitzgerald’s life and his work are another reason “The Great Gatsby” remains a contender as the Great American Novel and required reading in most American schools. Bryer, who is professor emeritus in the Department of English at the University of Maryland, said the age and time in one’s life when reading the novel has a great influence on how the piece is interpreted.

“I can remember reading it as a teenager, and at that point, I just thought it was the most romantic love story I had ever read, not knowing how it would end,” Bryer said. “I assumed that Gatsby would end up with Daisy and he’d be happily ever after, but it didn’t happen that way. My interest in it as a great stylistic achievement is probably something that, as an academic and as I’ve grown older, I see as a greater appeal.”

Corrigan also serves as the critic-in-residence and a professor of English at Georgetown University, and said she has read “The Great Gatsby” about 60 times. Corrigan said when she first read the novel in high school, she did not like it because she thought it was “a boring novel about rich people,” but now loves the book and learns something new each time she reads it. While doing research for her own book, “So We Read On: How The Great Gatsby Came to Be and Why It Endures,” Corrigan went back to the high school where she was introduced to Fitzgerald’s great work and sat in on classes teaching the novel, which changed her point of view that students often read the novel too young.

“The kids who love the novel right away and responded to it, they were connecting with Gatsby’s over-the-top dreams—the things that maybe later on you look at and say, ‘Ugh, this guy … he needed to take it down a notch or two,’” Corrigan said. “What I think you learn to respond to more as you go on is Nick’s voice and that sense of yearning and regret that he has for his dead friend Gatsby.”

Regardless of personal interpretations of the novel, “The Great Gatsby” remains Fitzgerald’s most acclaimed work, selling millions of copies each year, as well as having been adapted for film seven times, the latest being Kevin Asch’s 2014 film “Affluenza.” Ultimately, these adaptations have been seen as tributes paid to Fitzgerald, but Bowers, who has also studied adaptation theory, said fans of books often feel cheated when film adaptations do not live up to expectations. Bowers said that is often case with “The Great Gatsby” adaptations.

“The questions becomes, ‘What are you being faithful to, fidelity to what? The words on the page or to each individual reader’s conception of the words on the page?’” Bowers said. “Adapting something successfully is about tapping into a collective consciousness of what people think a story is, which is a tricky situation. One of the things with the adaptations of Gatsby is that the more adaptations it has, it’s kind of a sign of its post-modern longevity, this sense that we keep telling this story even if it is not necessarily exactly right … that’s the stuff that legend is made of, the stories that we keep telling.”

With “The Great Gatsby” being taught regularly in schools and film adaptations being made consistently, it appears Fitzgerald’s work will maintain its classic status in the future. O’Nan said as long as “The Great Gatsby” reflects the American Dream and American culture, the novel will never feel dated to American audiences.

“Obviously, we’re at a place within our history where it’s perfectly fitting because we still have this worry about who’s included and who’s not,” O’Nan said. “Gatsby calls that into question immediately and says, ‘No matter what Jimmy Gatz does, he’ll always be on the outside.’ No matter what F. Scott Fitzgerald does, he’ll always be on the outside. Maybe the next generation is going to be allowed to be part of that white-collared, privileged world, the movers and shakers, but if you’re not born the right way in America, you’re not going to get there, and I think that’s still [with us].”

Karen Ramsay Johnson, a professor of English at Indiana University-Purdue University Indianapolis, teaches “The Great Gatsby” in many of her courses. Johnson said “Gatsby’s” recognition as one of the Great American Novels is not limited to classrooms and the silver screen because many works of fiction refer to the novel within their own pages, such as “Fun Home” by Alison Bechdel, another novel Johnson teaches.

“I’m sure that there are critics out there that would argue that some other of Fitzgerald’s work is really his masterpiece, but I don’t think so,” Johnson said. “It was ‘The Great Gatsby.’ It made his name and it has held up over time, and it is such a cultural touchstone. There’s enormous numbers of references to ‘The Great Gatsby’ in other literature.”

Johnson said “The Great Gatsby’s” acclaim today is deserved, and the novel as well as Fitzgerald’s significance in American literature will persist for years to come.

“It can last another 90 years and probably will last beyond that,” Johnson said. “The glamour of the Jazz Age and the essential nature of the story will guarantee that readers can continue to respond to it, even as that historical period fades into the distance.”