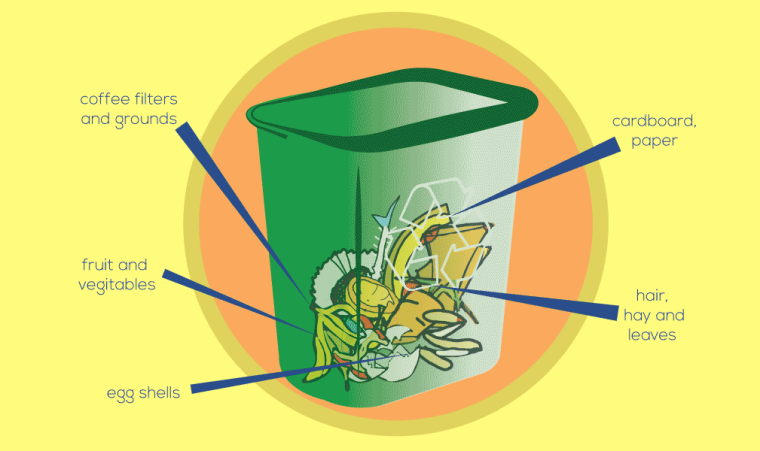 Composting on campus is more convenient for students now that the college has put to use a nearly $5,200 grant from the Illinois Department of Commerce and Economic Opportunity from the spring of 2012.

The grant allowed Columbia to place 13 new composting bins in student-centered areas such as the Journalism Lounge in the 33 E. Congress Parkway Building; The Harvester Cafe in the Alexandroff Campus Center, 600 S. Michigan Ave. and The Loft in the 916 S. Wabash Ave. Building.

Neale Baldyga, compost manager of sustainable Green Space Management at Columbia, said the college began composting in 2011 on a “do-it-yourself” basis. Baldyga said the college would collect white buckets from the photography department, clean the chemicals out, and then give them to the school’s cafeterias and some of the main spaces on campus.

Baldyga said this was used as leverage for Columbia’s composting grant to improve its program. Since then, the college has increased the amount of compost it has collected by 36 percent, said Baldyga.

“The college’s composting program is fairly new,” said John Wawrzaszek, Columbia’s sustainability manager. “It is a whole transition period but it’s good right now. We’ve got a lot of potential for growth.”

Composting is the process of taking food scraps or other organic matter and breaking it down into materials that can be used for plant fertilizer or soil.

In 2013, Columbia composted 20,695 pounds of waste, which is 5,465 pounds more than in 2012, according to the Annual Diversion Report. Baldyga said this could be the result of a raise in composting awareness on campus.

“I think people are interested, they just don’t know what to do beyond recycling and taking the bus,” Merritt said.

Wawrzaszek said he experienced a lack of awareness when implementing composting at Columbia and hopes the increase in bins will draw more attention to the initiative.

However, there has been a decrease in the recycling of some materials such as books, technotrash, and plastic bags. Book recycling weight decreased 70 percent. There was a 40.6 percent decrease in the weight of electronic recycling, according to the report.

Wawrzaszek said the falloff may have to do with changes in what items the college is using or ordering.

“Certain departments may have been purchasing large paper files in the past, then suddenly moving to digital, so we lose all the paper that was being recycled,” Wawrzaszek said.

Columbia was ranked No. 30 out of 30 schools on a list of the largest green power colleges on Jan. 27 by the United States Environmental Protection Agency.

The ranking was based on Columbia’s use of wind energy in 2012, but the college has since decided to sell its wind energy infrastructure and invest in cutting general energy costs by purchasing more efficient boilers, according to Wawrzaszek.

“We’ve taken the money we spent on wind racks and funneled it toward energy efficiency projects on campus like new boilers and air conditioning, things that make it more efficient so we aren’t still wasting energy,” Wawrzaszek said. “It’s like having a spot on the floor and just putting a rug over it.”

The Sustainability Department plans to continue spreading awareness on their composting efforts and the importance of recycling to educate those who may not be aware of the college’s programs.

“We need people to be vocal about this because if no one knew about it or supported it, then it becomes kind of an afterthought,” Baldyga said. “We are always open to [collaboration] and we love support.”