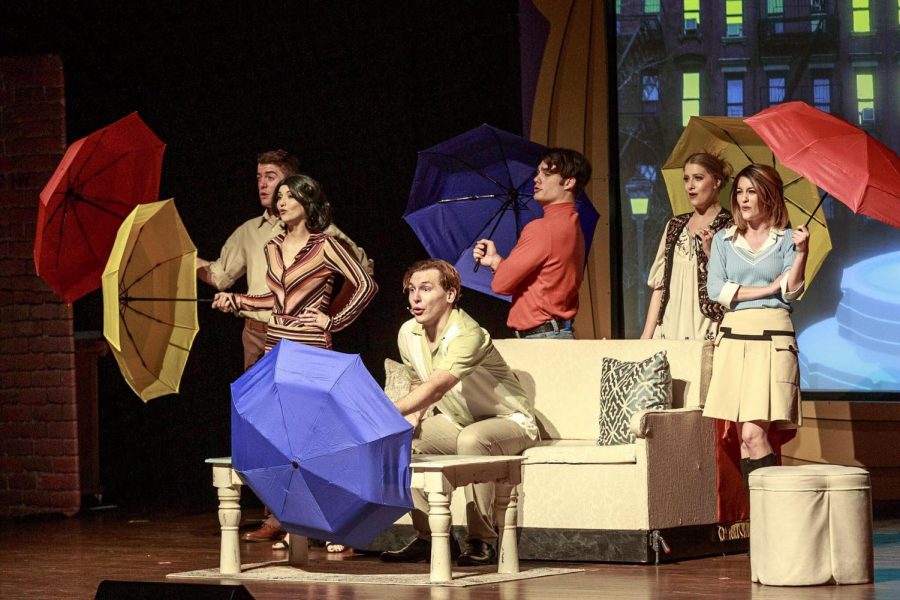 Strolling into a packed theater, an air of light-hearted anticipation fell on a crowd sporting “Friends” merchandise and clutching mixed drinks made for the show, rightfully named “How You Doin’?” after Joey’s catchphrase.

“FRIENDS! The Musical Parody,” opened Feb. 12 at Broadway Playhouse, 175 E. Chestnut St. The show began quickly, affirming the rumors of its fast-paced storyline. The cast—Ross, Monica, Chandler, Joey and Phoebe—walked onto the stage carrying umbrellas in primary colors, a nod to the opening of the ‘90s sitcom. They welcomed the audience with a bubbly song about being friends—the only way to introduce themselves.

The following scene presented Rachel stumbling into the “only coffee shop in New York City,” Central Perk, in a drab wedding dress, having fled from the altar where she almost made the mistake of marrying the terrible, and terribly rich, Barry.

Every scene that followed this introduction of Rachel to the group presented snippets of the sitcom’s most important moments in fast-forward.

The musical, which runs through March 3, took no breaks as the cast ran on and off stage, switching between Central Perk and Monica’s apartment. Gunther was introduced early but only appeared enough to profess his love for Rachel or pick up her slack while she was on the job. Other characters were introduced throughout the show as needed, including Janice, Marcel the monkey and Richard. Their appearances were short-lived but came as a pleasant surprise, thanks to actor Aaron C. Rutherford, who managed to play them all in addition to Chandler Bing.

Most of the performances were strikingly similar to those in “Friends,” especially Sami Griffith as Rachel Green and Domenic Servidio as Joey Tribbiani. Other performances just missed the mark and became lost in the flow of information and unfiltered sexual humor. That aside, each character’s catchphrase was  reinvented perfectly and then beaten to death over the course of the musical. But that just made it all the more hilarious.

Each character had a moment in the spotlight with their own sweet song, whether based on a trait, saying or, in Phoebe’s case, based on “Smelly Cat” because using the actual song is legally “not allowed!”  The cast’s vocal talent did not go unnoticed, either. Every voice was powerful when needed, all jokes aside, which was even more of a pleasant surprise for a parody musical.

As the show continued, exaggerated takes on “Friends” piled up high: the lack of progression in certain storylines, unrealistic character transformations, Monica’s wild dating life and the show’s overly emphasized focus on Ross and Rachel’s up and down relationship. These moments were manifested through songs and poked fun at the show’s deepest flaws in the most loving way.

Before seeing the show, I worried there would be too much going on, but the flow of the musical numbers and cheesy jokes created a perfect balance of humor and appreciation for the TV show.

Constantly pulling laughs, the musical was a realized version of “Friends.” While it didn’t exactly stick to the script of the TV show, I enjoyed seeing my favorite friends on stage, belting ballads about love and friendship. And humping.