Lacrosse trying to make a comeback 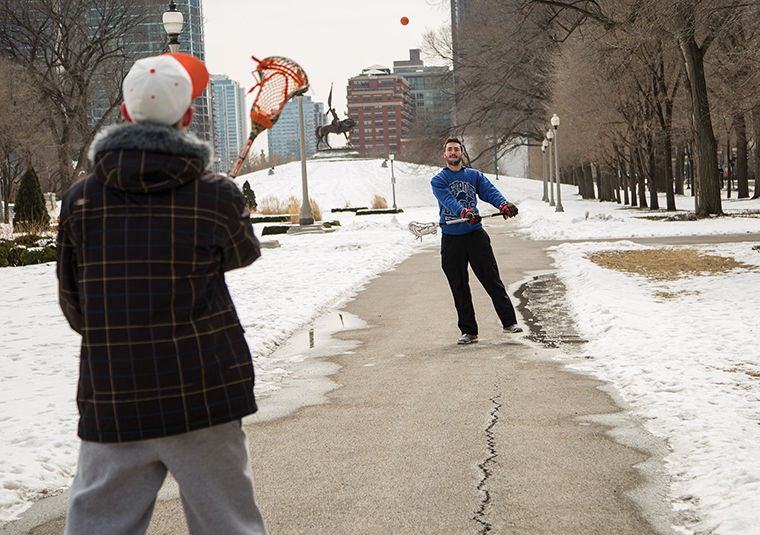 Lacrosse trying to make a comeback

With the help of a new captain, the Renegades lacrosse team is planning to gain traction on and off the field this year.

Reintroduced to the Renegades roster last spring, the team fell apart after the previous captain departed, leaving team members wondering if they would ever get a chance to play at Columbia.

Current team captain Raphael Anderson-Ayers, a sophomore business & entrepreneurship major, has taken charge of the fledgling team and has been working diligently with the Renegades to get the club up and running.

“Just creating the team right now would be a big thumbs up for us,” Anderson-Ayers said. “I know [we] have Quidditch, Belegarth, soccer and baseball, but I really wanted to bring a sport that is well-known in the Midwest. I wanted to start a new game and this is the sport that I wanted to bring to the table.”

Scott Wilson, vice president of the Renegades Student Athletic Association, said the previous captain could not handle the workload and gave up on trying to create the first Columbia lacrosse team in years.

“Raphael has been in constant communication with [Renegades president] Mike [Sempek] and me,” Wilson said. “He seems super passionate and definitely has what it takes to be a captain. To have a team here, you have to be very involved and on top of your stuff.”

“There was a bunch of hype and now we are starting from scratch again,” Miller said.

In order for school teams to be officially recognized and receive funding and resources from the Renegades, they have to follow certain procedures and protocols, which the previous lacrosse leadership neglected to do, Miller said.

To be recognized, the Renegades require a minimum of 10 students on a roster. The team must find a faculty advisor to sponsor the squad, as well as deliver a budget proposal to the Renegades’ executive board, which votes to approve or deny the team.

Anderson-Ayers said the team is trying to find a faculty advisor. The team currently has several faculty members in mind, but acting as advisor for the team is a commitment.

“The spring may just be us focusing on fundamentals,” Anderson-Ayers said. “Hopefully in fall of 2015, we will be playing and ready to go.”

Anderson-Ayers said the team currently has 22 official teammates on its roster, and there will be two separate teams—female and male,  because league regulations require different gear for female and male lacrosse players.

“If we are recognized as two [separate] teams, we get double the money from the school,” Anderson-Ayers said. “All the money would go toward equipment and gear because this is a contact sport and people can get hurt playing.”

Royce Mitchell, a defensive player and a junior theatre major, said he wants the team to be a bonding experience for Columbia students.

“If we can bring everyone together and actually play a sport that broadens our horizons and travel as a group and [act as] one, we can build a brotherly bond as players,” Mitchell said. “It’s one of those things that you shouldn’t go through college without.”

Even with dedicated team members like Mitchell, one of the biggest issues the Renegades face when trying to create a new team is finding students who are ready to fully commit to the responsibility of running a team, Miller said.

“We need students to not only participate but to be willing to step up and be captains and leaders,” Miller said. “Before Raphael, no one was willing to take the position of a leader. He has been great about it and has been really active.”

Anderson-Ayers said there is nothing like a team sport and said that he wants to encourage students to get involved with lacrosse.

“A lot of the things you do [in life] are team-oriented,” Anderson-Ayers said. “You are always paired in groups and the real world isn’t based on individuals doing tasks. There’s a lot of team atmosphere, and that is what I am bringing to Columbia.”

Lacrosse interest meetings will be held April 2, 3, 9 and 10 from 5—6:30 p.m. in the Underground Café, 600 S. Michigan Ave. Contact captain Raphael Anderson-Ayers at raphael.andersonayers@loop.colum.edu  if interested in joining the team.