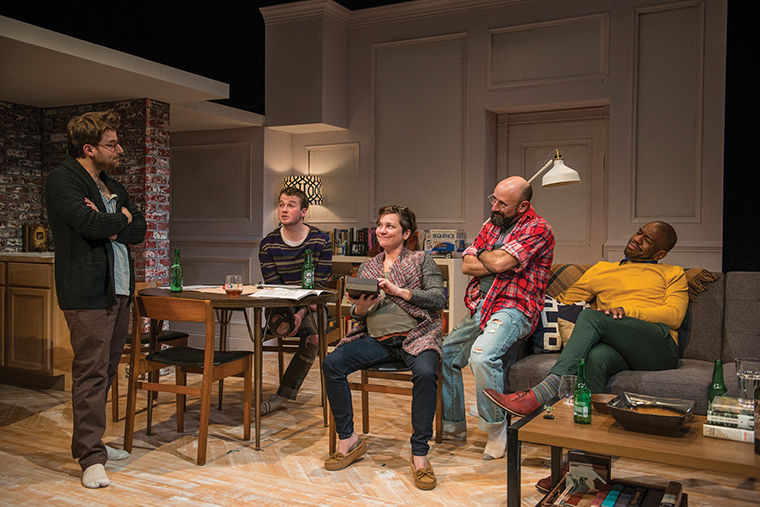 The cast of About Face Theatre’s world premiere ‘Le Switch,’ perform at Theater Wit, 1229 W. Belmont Ave., as the show examines the antiquated stereotypes of gay marriage after its legalization in the United States.

In honor of its 20th anniversary, About Face Theatre is premiering “Le Switch,” a play about a gay couple exploring the meaning of  commitment amid nationwide marriage equality.

“Le Switch” was written by About Face Theatre’s artistic associate Philip Dawkins and directed by Stephen Brackett with special arrangement by Doug Nevin, and is set to run at the Theater Wit, 1229 W. Belmont Ave., from Jan. 15 through Feb. 21.

“’[Le Switch]’ is about what happens when things you have always known to be true become recognized and accepted by the world around you,” Dawkins said.

He said the show focuses on what it means to publicly be in a committed same-sex relationship, rather than portraying a heteronormative relationship onstage.

“Le Switch” focuses on David, played by Stephen Cone, who is nervous about committing to a partner until he meets Benoit, played by Collin Rice, a recent June 2015 Northwestern University theatre graduate.

“‘Le Switch’ takes the thrill and excitement of marriage equality and turns it on its head, but in a way that makes it accessible for everyone,” Rice said.

The show sparks necessary conversations about queer identity that need to be had, he added.

“It presents a multitude of sides to the story while keeping it an incredibly lighthearted comedy of characters passionate” he said.

The show is Rice’s first professional show since graduating from Northwestern in June 2015, and he is amazingly overwhelmed to be working on the show, he said.

Dawkins said the June 2015 Supreme Court ruling that legalized marriage equality nationwide inspired him to write a romantic comedy in which people’s personal lives are directly affected by the changes and outcomes that come with gay marriage, including becoming mainstream after being treated negatively throughout history.

“The victory of [legalizing] gay marriage was a profound moment for the LGBTQ community, and I think everybody can celebrate the success of that,” Brackett said. “The identity of queerness is outside the parameters of the heterosexual ideal of marriage.”

Brackett, who works on queer musicals in New York, said “Le Switch” is his first show with About Face Theatre.

“I am overwhelmingly struck by the sense of community here,” he said. “The real joy and passion for the craft has been refreshing.”

“Le Switch” is part of a rolling premiere, and will head to the Jungle Theater in Minneapolis after Chicago.

“About Face Theatre and the Jungle are holding hands and tossing the ball to each other with this play,” Dawkins  said about the partnership between companies.

He said he is pleased to premiere his story in Chicago because the theater landscape is diverse and tells stories of individuals from all walks of life.

“I see this play as fitting in very nicely in an already standard practice of telling stories,” he said.

“Le Switch” is set to play at Theater Wit, 1229 W. Belmont Ave., through Feb. 21. Visit AboutFaceTheatre.org to purchase tickets. Tickets are $20 for students and $35 for adults.