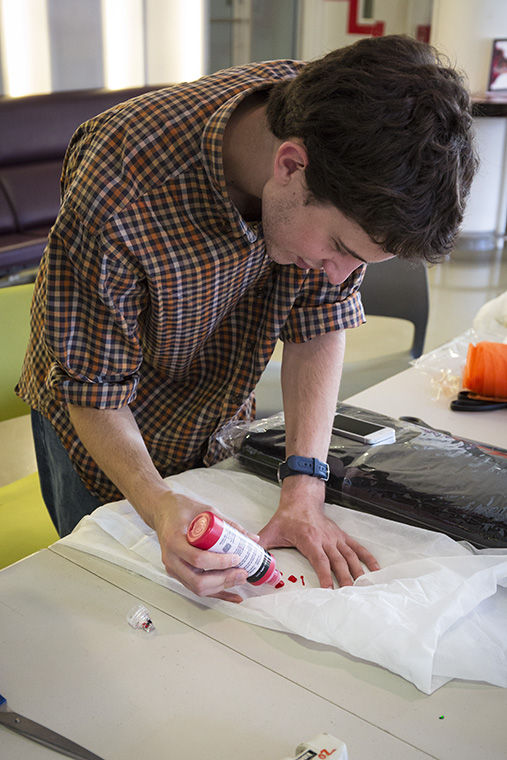 Alex Murfey, a junior cinema art + science major, decorated his own jumpsuit for the upcoming Halloween Gathering during a workshop event on Sept. 30.

Students are using their artistic talents to collaborate with the Chicago Cultural Mile Association’s Halloween Gathering, a new initiative meant to gather Chicago’s diverse creative communities for an all-day festival with a nighttime parade to take place on Oct. 24.

Mark Kelly, vice president of Student Success and artistic director of the Halloween Gathering, said he was approached by Executive Director of the Chicago Cultural Mile Association Sharene Shariatzadeh to design an event bringing together local creatives.

“I believe [Columbia] is one of the powerhouses for the future of creative practice in the city, and [our] graduates and students of Columbia will be an animating creative force going forward,” Kelly said. “So we better be well-represented, and I am so pleased that we are.”

The event draws together different driving forces of Chicago’s art and culture community, including the Field Museum, The Art Institute of Chicago and the Association for the Advancement of Creative Musicians. Kelly said he thinks the diverse assortment of artistry is what distinguishes Chicago from other Midwestern cities.

“Culture is not always recognized as a driving force or celebrated [in Chicago],” Kelly said. “I thought [The Halloween Gathering] might be a playful way of bringing together the creative communities and celebrating who they are and what they do.”

He said he wants the gathering to bring together creative communities in Chicago that do not usually connect.

“[We have] the most esteemed and established, and at the same time, the upstarts, the trouble makers and the aspiring all coming together,” Kelly said. “Both are equally important to the city.”

“If we are successful and students respond to what this is, it will be the greatest concentration of our students coming together off of the campus,” Kelly said.

Delaney Morris, a senior business & entrepreneurship major and producer of Columbia’s role in the Halloween Gathering, said she is most excited for the moment right before the parade kicks off.

“Everybody is kind of quiet and listening to see when it starts. [It is] that feeling when it all finally comes together,” Morris said. “The whole school is presenting this awesome contingent to the city of Chicago.”

To bring a “cohesive mobilization” of students, Kelly said students can create jumpsuits to showcase their creative personas. Workshops have been held—the next one scheduled for Oct. 13—to supply students with the material to design their own custom jumpsuits and find ways to get involved. Before the procession, students will learn a simple dance prior to being led by illuminating lanterns and a crew of percussionists during the parade.

The gathering chose 13 Creative Spirit Fellows, influential arts leaders in Chicago, who act as grand marshals during the parade. Each of them will wear custom costumes, and many of them include faculty and former students, Kelly said.

Max Covill, a senior theatre major and one of the chief orientation leaders with New Student Programs, said they have been working on promoting the event to freshmen at the New Student Commons every Friday. He said many freshmen have already received their jumpsuits and are interested in participating.

“I am excited to see Columbia’s presence because it is the entire arts community of Chicago coming in and doing a parade,” Covill said. “It is just so great to see that Columbia is at the forefront.”

Chris West, operations manager for Frequency TV, said the college’s TV station has been producing promotional videos for the event and is doing a live webcast of the parade.

“This is real TV so the students get really excited,” West said. “They get nervous as well, but it is a good nervous energy and they are looking forward to the experience.”

West said he is excited to work with a larger audience and on a bigger scale than the students typically do.

The Halloween Gathering is scheduled for the same weekend as the Wabash Arts Corridor Crawl, an artistic festival led by Columbia and its neighbors, and Columbia’s parents and alumni weekend. Kelly said as the campus is activated by thousands of people, he hopes it will bring a sense of community to the college.

“I hope our students really embrace this and mobilize for it and let their creative juices flow as they build their creative persona on their jumpsuits,” Kelly said. “I hope the entire community, faculty and staff, come out because we are all part of this.”