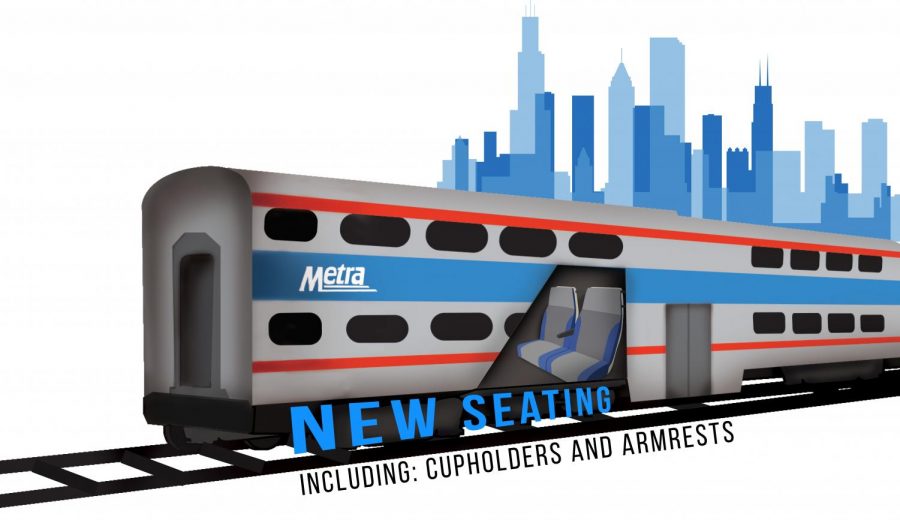 Dramatic new safety technology, along with better, more comfortable seats with cupholders and armrests are on the horizon for Columbia students who commute to school aboard Metra trains. But there’s a catch. Fares are due to increase to pay for the improvements, rail officials say.

Metra began installing seats with more amenities, such as cupholders, armrests and better lumbar support, during the week of Jan. 26 for a test run. Beginning Feb. 1. Train fares and fees for purchasing tickets on board a Metra train will increase to fund these resources, according to Metra press releases.

Railcar 7437 on the Milwaukee District line is the first car to test the upgraded seats.

“These new seats offer amenities our customers have never had before—cupholders, armrests and higher backs,” Metra Executive Director and CEO Don Orseno said in the press release. “We will be asking our customers to give us feedback about the new seats, and we hope they like them and find them to be more comfortable than the current seating.”

According to the press release, Metra’s new seats cost the same as the old bench-style seats, so they will be installed when old seats need replacing. The transit authority plans to add new seating in two cars each month in all lines except Metra Electric and will seek feedback from riders starting in February.

Curtis Koch, a junior radio major who commutes more than an hour from Crystal Lake, said he is looking forward to the upgrades. He added that cupholders would likely reduce spillage problems in the train cars.

Metra spokesman Michael Gillis said Metra will also install a new system for the west suburban Burlington Northern Santa Fe line called Positive Train Control,which is expected to be operational by the end of the year.

Gillis said PTC combines GPS and radio technology to monitor engineers’ handling of trains and override the engineer to stop the train if needed. For example, if an engineer was traveling too fast for the track conditions, PTC could stop the train.

Gillis said Metra has worked to implement the system since the United States Congress passed a law in 2008 making PTC mandatory, but the system could cost upward of $350 million to install and $15 million to $20 million annually to maintain.

“This year, part of the fare increase that is going to start on Feb. 1 will help us pay for the additional operating cost,” Gillis said. “Part of the money we are getting for [fare] increase[s] will pay for the operating cost of PTC, and the other half of it will go toward our capital program, of which PTC installation is a component.”

Gillis said there has always been a charge for purchasing a ticket aboard a Metra train instead of before boarding, but effective Feb. 1 the fee will increase from $3 a ticket to $5 a group—meaning more than one person— and if someone is traveling alone, they are responsible for the entire $5.

Gillis said the fee increase is an attempt to encourage passengers to transition to the mobile Ventra app, noting that passengers who board the train without tickets can avoid the fee by purchasing tickets with the app.