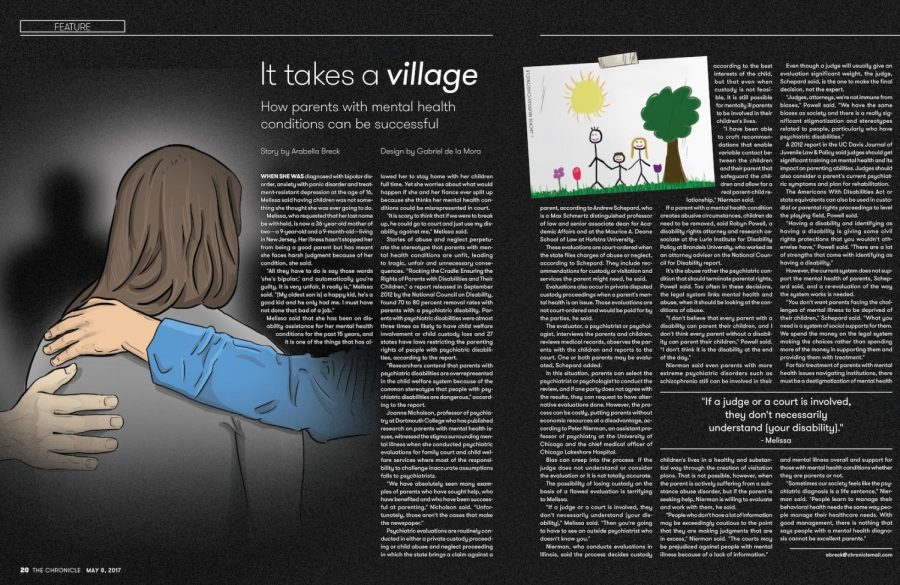 When she was diagnosed with bipolar disorder, anxiety with panic disorder and treatment-resistant depression at the age of 16, Melissa said having children was not something she thought she was ever going to do.

Melissa, who requested that her last name be withheld, is now a 36-year-old mother of two­—a 9-year-old and a 9-month-old—living in New Jersey. Her illness hasn’t stopped her from being a good parent but has meant she faces harsh judgment because of her condition, she said.

“All they have to do is say those words ‘she’s bipolar,’ and automatically you’re guilty. It is very unfair, it really is,” Melissa said. “[My oldest son is] a happy kid, he’s a good kid and he only had me. I must have not done that bad of a job.”

“It is scary to think that if we were to break up, he could go to court and just use my disability against me,” Melissa said.

Joanne Nicholson, professor of psychiatry at Dartmouth College who has published research on parents with mental health issues, witnessed the stigma surrounding mental illness when she conducted psychiatric evaluations for family court and child welfare services where most of the responsibility to challenge inaccurate assumptions falls to psychiatrists.

“We have absolutely seen many examples of parents who have sought help, who have benefited and who have been successful at parenting,” Nicholson said. “Unfortunately, those aren’t the cases that make the newspaper.”

Psychiatric evaluations are routinely conducted in either a private custody proceeding or child abuse and neglect proceeding in which the state brings a claim against a parent, according to Andrew Schepard, who is a Max Schmertz distinguished professor of law and senior associate dean for Academic Affairs and at the Maurice A. Deane School of Law at Hofstra University.

These evaluations are court-ordered when the state files charges of abuse or neglect, according to Schepard. They include recommendations for custody or visitation and services the parent might need, he said.

Evaluations also occur in private disputed custody proceedings when a parent’s mental health is an issue. Those evaluations are not court-ordered and would be paid for by the parties, he said.

The evaluator, a psychiatrist or psychologist, interviews the parents and children, reviews medical records, observes the parents with the children and reports to the court. One or both parents may be evaluated, Schepard added.

In this situation, parents can select the psychiatrist or psychologist to conduct the review, and if one party does not agree with the results, they can request to have alternative evaluations done. However, the process can be costly, putting parents without economic resources at a disadvantage, according to Peter Nierman, an assistant professor of psychiatry at the University of Chicago and the chief medical officer of Chicago Lakeshore Hospital.

Bias can creep into the process  if the  judge does not understand or consider the evaluation or it is not totally accurate.

The possibility of losing custody on the basis of a flawed evaluation is terrifying to Melissa.

“If a judge or a court is involved, they don’t necessarily understand [your disability],” Melissa said. “Then you’re going to have to see an outside psychiatrist who doesn’t know you.”

Nierman, who conducts evaluations in Illinois, said the process decides custody according to the best interests of the child, but that even when custody is not feasible, it is still possible for mentally ill parents to be involved in their children’s lives.

“I have been able to craft recommendations that enable variable contact between the children and their parent that safeguard the children and allow for a real parent-child relationship,” Nierman said.

If a parent with a mental health condition creates abusive circumstances, children do need to be removed, said Robyn Powell, a disability rights attorney and research associate at the Lurie Institute for Disability Policy at Brandeis University, who worked as an attorney adviser on the National Council for Disability report.

It’s the abuse rather the psychiatric condition that should terminate parental rights, Powell said. Too often in these decisions, the legal system links mental health and abuse, when it should be looking at the conditions of abuse.

Nierman said even parents with more extreme psychiatric disorders such as schizophrenia still can be involved in their children’s lives in a healthy and substantial way through the creation of visitation plans. That is not possible, however, when the parent is actively suffering from a substance abuse disorder, but if the parent is seeking help, Nierman is willing to evaluate and work with them, he said.

“People who don’t have a lot of information may be exceedingly cautious to the point that they are making judgments that are in excess,” Nierman said. “The courts may be prejudiced against people with mental illness because of a lack of information.”

Even though a judge will usually give an evaluation significant weight, the judge, Schepard said, is the one to make the final decision, not the expert.

“Judges, attorneys, we’re not immune from biases,” Powell said. “We have the same biases as society and there is a really significant stigmatization and stereotypes related to people, particularly who have psychiatric disabilities.”

A 2012 report in the UC Davis Journal of Juvenile Law & Policy said judges should get significant training on mental health and its impact on parenting abilities. Judges should also consider a parent’s current psychiatric symptoms and plan for rehabilitation.

The Americans With Disabilities Act or state equivalents can also be used in custodial or parental rights proceedings to level the playing field, Powell said.

However, the current system does not support the mental health of parents, Schepard said, and a re-evaluation of the way the system works is needed.

“You don’t want parents facing the challenges of mental illness to be deprived of their children,” Schepard said. “What you need is a system of social supports for them. We spend the money on the legal system making the choices rather than spending more of the money in supporting them and providing them with treatment.”

“Sometimes our society feels like the psychiatric diagnosis is a life sentence,” Nierman said. “People learn to manage their behavioral health needs the same way people manage their healthcare needs. With good management, there is nothing that says people with a mental health diagnosis cannot be excellent parents.”