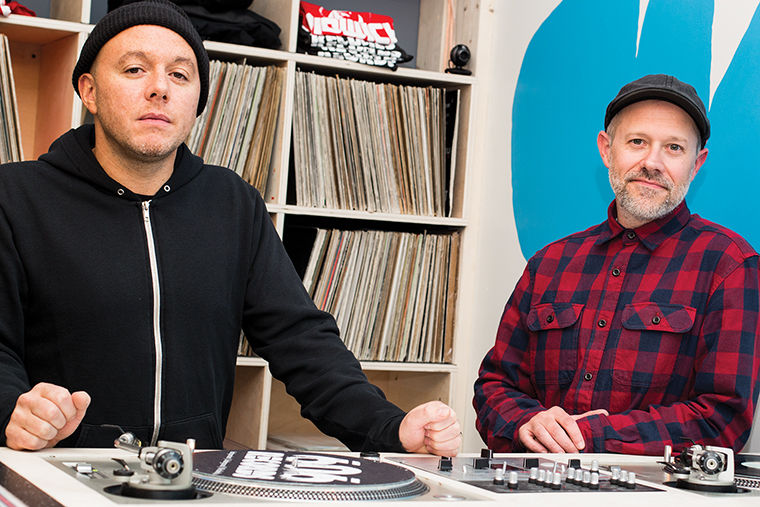 Tim Unsell (right) said he and Drew Mitchell (left) wanted to keep the store simple, so they could let the product shine.

The record store opened on Oct. 24 after two years of preparations.

Store owners Tim Unsell and Drew Mitchell were neighbors and met at a party in 2011 where they discussed their mutual interest in vinyl.

“We were at a party spinning records,” Mitchell said. “We were saying to [each other], ‘We should probably open a record store,’

That joke became a reality in 2013, Unsell said, when the pair decided to follow through on it.

“We started building momentum and taking [opening the store] a little more seriously and said, ‘You know what, we’re just going to do this,’” Mitchell said.

Unsell said the store has a casual environment, and customers are free to ask for music recommendations, and if the store does not have what they want, he and Mitchell will try to find something similar.

“We’re fans of small labels that your average Joe wouldn’t know about, and we want to put a spotlight on the labels we really like,” Unsell said. “We want to show people there’s good music out there that’s worth hearing and bring it to the forefront in our store.”

Mitchell said he and Unsell feature records by artists from all genres of music. He added that they like to keep their ears to the ground to find the next up-and-coming artist.

Although 606 Records is located just a few blocks from Pinwheel Records, 1722 W. 18th St., Unsell and Mitchell said they try to ensure their store is different from its competitors by following a European model and bringing attention to new releases they feel people may not have heard.

“I think [Pinwheel Records’] niche is more on an indie rock scale,” Mitchell said. “I think that would differentiate us from a music standpoint.”

He added that 606 Records offers listening stations in the store where people can preview records before buying them.

Unsell and Mitchell hosted a grand opening party on Oct. 24, open to anyone who wanted to check out the inventory.

Mitchell said the party turned out significantly better than he and Unsell expected, and that a lot of people flocked through the doors, many of them friends and family in the area who came out to show support.

“We cannot thank the community enough,” Unsell said. “They really came out in force, and showed some love to us. We really appreciate it.”

Mitchell said turntables are built into some of the store’s counters, which DJs used to spin records during the party.

Unsell and Mitchell commissioned Chicago artist Cody Hudson, who works as a graphic designer, to create a mural inside the store. The mural takes up an entire wall and consists of designs and shapes that resemble “abstracted sound waves” and records being pulled out of their sleeves, Hudson said.

“The mural is meant to be loose and shape-based, like a lot of my work,  but it is also meant to

make people think about music and how we hear things around us,” Hudson said.

Hudson said it was a great project because Unsell and Mitchell were fans of his previous work and gave him artistic freedom on the mural. He added he used to do graphic design work for record companies and has been buying records for 30 years, so he enjoyed returning to that environment.

“We really thought about the design of the store,” Unsell said. “We didn’t want it to be a typical-looking record store you see in the states. We took a lot of cues from some smaller stores in Europe and the U.K., as well as some of our favorite stores here in the U.S.”

Unsell said he and Mitchell try to maintain a very easy-going atmosphere in their store.

“It’s a very comfortable environment for anybody to come and check out, whether you want to hang out and talk music, sit and listen or browse through our racks,” Mitchell said.

606 Records is open from 11 a.m.–8 p.m. Tuesday through Saturday, on Sunday from 12 p.m.–5 p.m., and is closed on Mondays. To shop online, to find more information, or to watch a video of Hudson painting the mural, visit 606Records.com.