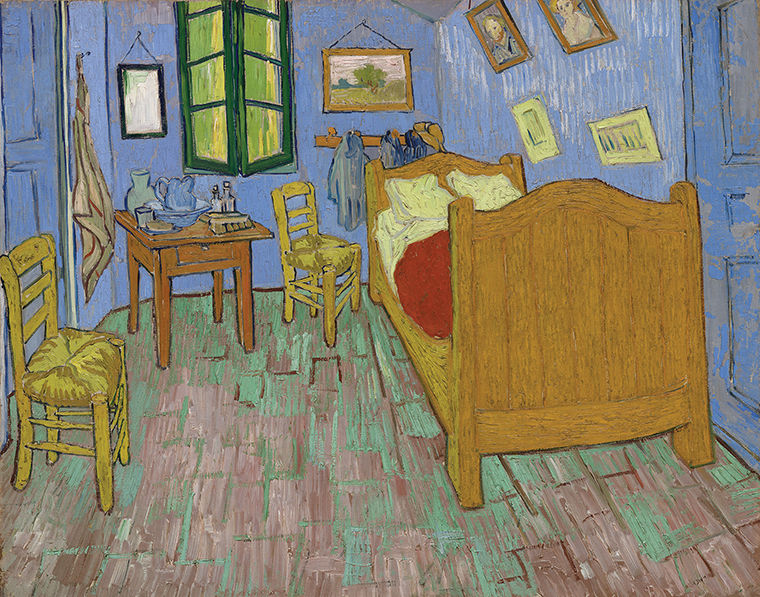 Courtesy The Art Institute of Chicago

Vincent van Gogh created the first of his three versions of “The Bedroom” paintings in 1888 in Arles, France, with two more painted a year later in an asylum in Saint-Rémy, France.

The Art Institute of Chicago has held the second copy of “The Bedroom” in its permanent collection since 1926, and it will soon be joined by its earlier and later incarnations in the exhibit “Van Gogh’s Bedrooms” scheduled to run from Feb. 14 through May 10.

This will be the first time all “The Bedroom” paintings will be  shown in the same museum in North America.

Approximately 36 of Van Gogh’s paintings, letters and other works will also be on display as part of the exhibit.

Van Gogh’s paintings are a representation of who he was emotionally and psychologically, which is part of the reason the paintings are so compelling to people, said Steven Naifeh, co-author of the Pulitzer Prize-winning book “Van Gogh: The Life.”

Van Gogh painted the first “The Bedroom” in anticipation of the arrival of his first guest, Paul Gauguin, in the yellow house in Arles, said Susan Slocum, an adjunct professor in the Art & Art History Department.

“It was probably the happiest time in [Van Gogh’s] life,” Slocum said. “Everything was coming together for him, and he was just anticipating this joyous event. The copies were made later when he’s in Saint-Rémy. They are looking back at this happy moment.”

According to the museum’s website, “The Bedroom” and its copies look almost identical at first, but upon closer examination, have unique details.

“[The Art Institute’s copy] was painted when [Van Gogh] was very isolated,” Slocum said. “The whole experience of his disappointment with Gauguin, with himself, his trying to hold on—he used painting as his lifeline to sanity.”

Slocum said Van Gogh likely did not have “The Bedroom” in front of him while creating the copies in the asylum, so they were probably created from memory.

Naifeh said he will speak about Van Gogh’s artistic influences at his lecture, scheduled for Feb. 25.

“Even with how individual and psychological his paintings are, [Van Gogh] was—as all artists are—inspired by other artists,” Naifeh said. “My talk is about some of the paintings that were particularly influential. One of the touchstones of the talk is the collection of works by other artists who were important to Van Gogh.”

A Jan. 19 Art Institute press release said “Van Gogh’s Bedrooms” will include a digitally enhanced reconstruction of Van Gogh’s bedroom, so guests can experience the space where Van Gogh lived and worked in the yellow house.

“The incredible thing about [Van Gogh] is he is so beloved that there are exhibitions of his work all the time, and what’s astonishing is that you can still come up with an idea that hasn’t been done,” Naifeh said. “To pull these three paintings together with the paintings related to them has never been done.”

Columbia students get free admission to the museum, but the Van Gogh exhibit requires an additional $5 ticket.